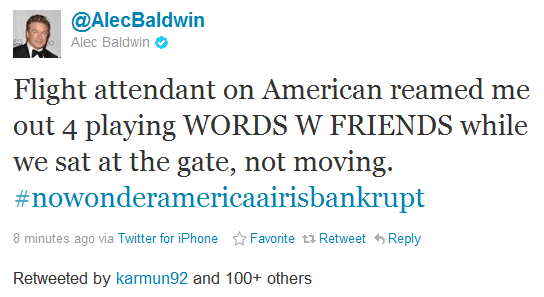 Last December, American Airlines kicked a passenger off their plane. He was unruly, foul-mouthed and refused to shut off his cell phone in preparation for takeoff.

His name was Alec Baldwin. After he got kicked off, he tweeted:

“Flight attendant on American reamed me out 4 playing WORDS W FRIENDS while we sat at the gate, not moving. #nowonderamericanairisbankrupt”

Within five minutes of his tweet, American Airlines responded and launched its own campaign to garner the support of fans and followers. Its goal: Show that no matter who the passenger, he or she should comply with FAA rules and not act inappropriately toward the cabin crew.

For this speedy response and for swaying public opinion to American’s favor, we declare Weber Shandwick for American Airlines the winner in the “Best Crisis Management” category of PR Daily’s Digital PR and Social Media Awards.

Defending itself on social media

If Baldwin was going to social media, so was American Airlines.

The next morning, American Airlines posted its official statement to its Facebook page. Reporters and bloggers were directed to this page. The message reached more than 75,000 people and received more than 6,000 “likes.” It said:

“Since an extremely vocal customer has publicly identified himself as being removed from an American Airlines flight on Tuesday, Dec. 6, we have elected to provide the actual facts of the matter as well as the FAA regulations which American, and all airlines, must enforce. Cell phones and electronic devices are allowed to be used while the aircraft is at the gate and the door is open for boarding. When the door is closed for departure and the seat belt light is turned on, all cell phones and electronic devices must be turned off for taxi-out and take-off. This passenger declined to turn off his cell phone when asked to do so at the appropriate time. The passenger ultimately stood up (with the seat belt light still on for departure) and took his phone into the plane’s lavatory. He slammed the lavatory door so hard, the cockpit crew heard it and became alarmed, even with the cockpit door closed and locked. They immediately contacted the cabin crew to check on the situation. The passenger was extremely rude to the crew, calling them inappropriate names and using offensive language. Given the facts above, the passenger was removed from the flight and denied boarding.”

This post changed the conversation: Now, people talked about how “celebrity does not equal carte blanche to ignore FAA guidelines,” according to the entry. There were 27,230 comments on American’s Facebook post, reaching 38 million people.

Congratulations for taking control of the situation, Weber Shandwick and American Airlines. 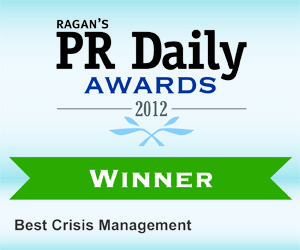