Remember thumbing through record albums in record stores as new releases were piped in over the PA system? With music today available online or through services like Spotify, it’s hard for a relatively unknown band to get attention for a new release. That’s the challenge marketing and PR agency Adam Ritchie Brand Direction undertook for its client, the band The Lights Out. Its success has won it first place in the “Media Relations” category of PR Daily’s 2017 Digital PR & Social Media Awards.

Adam Ritchie Brand Direction took an innovative approach to getting special attention from the press—and not just the music press. The agency approached a brewery to create a new beer inspired by the songs on the band’s new album. (Each song is a report sent back from an alternative universe.)

The beer, T.R.I.P., became the world’s first album release beer. Using back-end technology on the band’s Twitter account, the agency was able to send a message to consumers telling them what they were doing at that moment in a parallel universe; the message was triggered when consumers activated the social media trigger on the beer’s label. The message also included a link to the album.

Media outreach included a broad range of outlets, from technology and food to marketing and alternative publications, many of which responded enthusiastically. 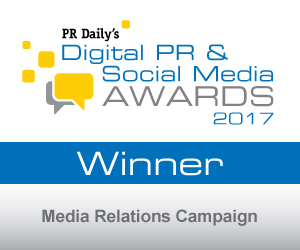