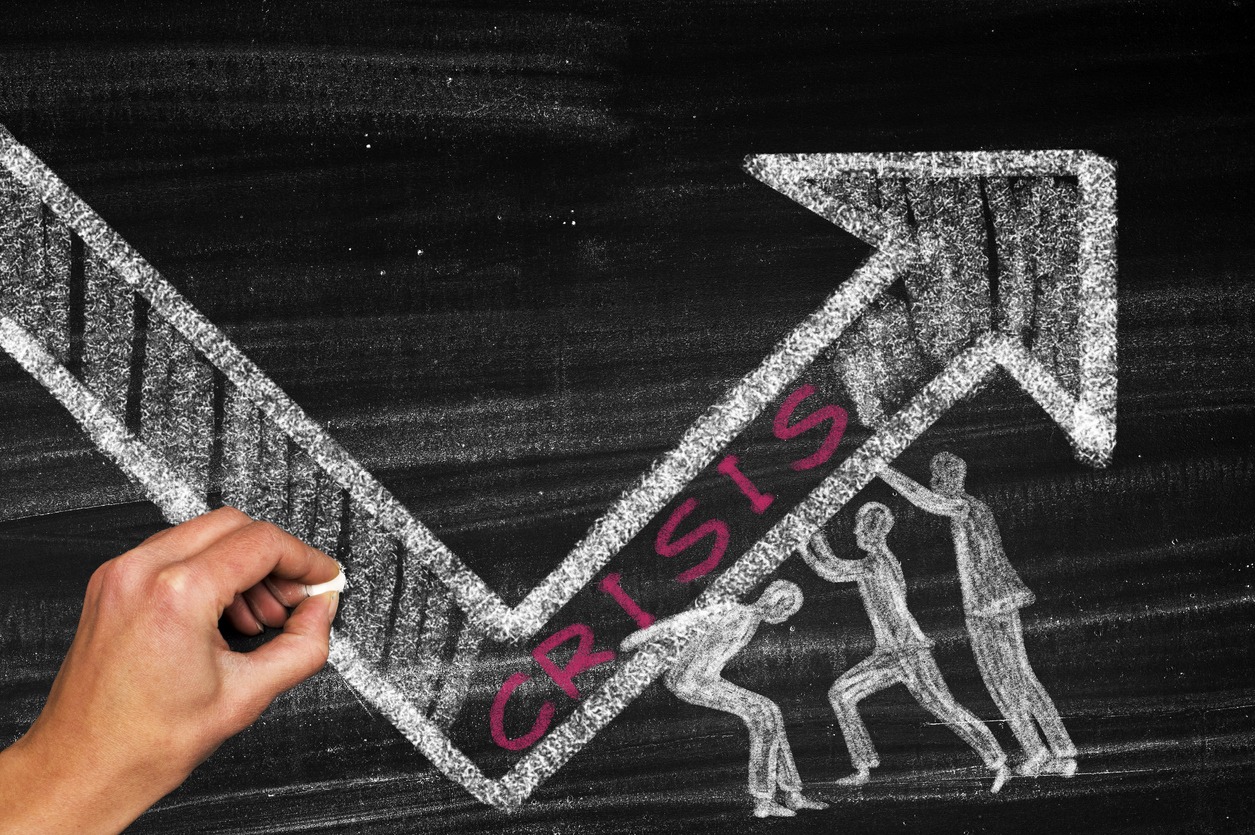 The biggest stories of 2021 weren’t only about the COVID-19 crisis.

After a vaccine rollout promised a return to normal—only to have hopes dashed by the rise of the Delta variant—there has been room for many stories and crises in 2021. There are some unifying themes: political division and anger, corporations betraying public trust, PR gaffes and cybersecurity issues.

So, what are the lessons to be learned from the missteps of the past year?

Let’s take a look at the top crises and what trends they indicate for another uncertain year ahead:

1. Facebook’s whistleblower and the WSJ reporting

The company formerly known as Facebook—now “Meta”—has had another tough year in the press.

Frances Haugen, a former Facebook employee turned whistleblower, blasted the company’s leadership in both interviews with news outlets and before Congress. Her claim that the company consistently puts profits before people sparked increased scrutiny of the company that has had a rash of PR crises since the Cambridge Analytica scandal after the 2016 U.S. election.

“At every opportunity where Facebook—sorry Meta—has had a chance to deepen audience trust or build reputational goodwill, they seem to choose the path of most resistance,” says Andrew Moyer, executive vice president and general manager with Reputation Partners. “They retreat into a ‘bunker mentality,’ which has them positioned to fight, deny or shift any blame or responsibility, instead of using those moments to build reputational credit by demonstrating genuine awareness, concern and compassion.”

The takeaway for Moyer—as for many—has been poor leadership from the top of the organization.

“These repeated missteps fall squarely at the top with Mark Zuckerberg, and it is clear he has chosen a path of antagonism against critics in the media, government and public at large, and this lack of empathy is an area where he should reconsider his strategy,” he says.

The takeaway: CEOs and their reputations are a huge liability for organizations heading into 2022. Make sure you review crisis plans and consider how your top leaders might not be the best spokesperson for your organization, depending on the issue at hand.

“Then it’s an impact on national and local institutions.”

The COVID-19 crisis is not yet over—and the increase in misinformation and disinformation has created new crises for brands.

For example, drug company Pfizer faced a social media conspiracy that its new treatment for COVID-19 was just repackaged ivermectin, the anti-parasite medication that had become popular among anti-vaccine advocates as an alternative, albeit debunked, treatment.

Social media users have coined the term “Pfizermectin” in their posts claiming that ivermectin and Pfizer’s new oral antiviral, PF-07321332, are the same drug. According to Pfizer, the drug is being tested in combination with the HIV drug ritonavir in a study on 2,660 people.

There is no relationship at all between the two drugs, said Dr. William A Petri, professor of infectious diseases at the University of Virginia.

The takeaway: Misinformation continues to be a key threat facing organizations in 2022, particularly around polarized issues like COVID-19, politics and more.

In a recent webinar for Communications Week, Jennifer Granston, chief customer officer and head of insights for Zignal Labs shared how comms pros must shift to understand the risks for their organization.

“Instead of just thinking about brand reputation, think about all the ways your brand could be attacked using [misinformation].”

The specter of cyber threats was embodied by the Colonial Pipeline hack earlier this year that shutdown delivery of fuel to the East Coast, resulting in shortages and long lines at the pump.

The ransomware attack got further scrutiny after Colonial Pipeline’s CEO, Joseph Blount, admitted to paying the hackers millions in ransom.

“It was the right thing to do for the country,” he told The Wall Street Journal. “I didn’t make [the choice] lightly. I will admit that I wasn’t comfortable seeing money go out the door to people like this.”

“In 2021, too many companies showed that they are still reluctant or ill-prepared to respond quickly and effectively during a cyberattack,” says Ted Birkhahn, president of Hot Paper Lantern.

“One silver lining to the proliferation of cyberattacks against major companies is that it has prompted many CEOs and Board of Directors to re-evaluate and test their cybersecurity practices and communications plans. Preparation is half the battle, which means more companies will be ready to respond effectively should they become a victim of a cyberattack.”

The takeaway: With the rise of cyberthreats for the year ahead, PR pros must plan—and test—their crisis response for cyberattacks.

“In 2022, more companies will operate under the assumption that attacks are inevitable and will prioritize planning exercises that make their operations and communications as resilient as possible,” warns Birkhan. “This includes running tabletop exercises, moving more data and communications platforms to the cloud, and embracing that your standard crisis communications plan won’t cut it during a cyberattack.”

4. Coinbase/Basecamp and political speech in the workplace

Several organizations found it tricky to navigate political speech in the workplace in 2021. Both Coinbase and Basecamp tried to set boundaries around the political debate at work—only to have their efforts backfire when employees saw an effort to silence discussion about racial inequality and workplace fairness.

For Basecamp in particular, the internal messaging errors have been disastrous. “Basecamp had 57 employees in April,” says Jon Goldberg, founder and chief reputation architect at Reputation Architects. “At last count, it had lost roughly a third of its staff.”

It’s a big change for organizations that tried to remain largely apolitical over the last several decades. In today’s media and political environment, it can be disastrous to stay on the sidelines.

“Being apolitical is not an option,” explains Goldberg. “Given the rapid rise of political and social activism by employees and the growing weaponization of reputation through cancel culture, organizations need to establish ‘politics at work’ policies to give employees clear guidance on what is and is not acceptable.”

The takeaway: There are lots of steps to be taken here, Goldberg says.

“Policies need to make clear that while consensual conversations about political issues are permitted. Participants need to be mindful of where they are taking place and any unintended audiences they might have.”

You’ll also have to rethink how you define politics within the organization. “Policies should also provide guidance on topics like listening to politically charged content or posting political images in common areas and individual workspaces, wearing clothing with political messages, using company email and messaging systems for political messages and similar activities that co-workers may find unwelcome or that potentially violate their rights.”

The athletic equipment company was faced with hard questions after several incidents involving its Tread+, including the death of a young child.

The treadmill product was eventually recalled—but only after Peloton CEO John Foley tried to dismiss the incidents as a “small handful” of “tragic accidents.”

“I want to be clear, Peloton made a mistake in our initial response to the Consumer Product Safety Commission’s request that we recall the Tread+,” Mr. Foley said in a statement on Wednesday. “We should have engaged more productively with them from the outset. For that, I apologize.”

For Goldberg, the incident was an example of a huge missed opportunity.

“An organization has no more powerful opportunity to remind people why it is worthy of their attention and trust than in a crisis, when lives are on the line and the world is watching,” he says. “Peloton failed to grasp, let alone embrace, the opportunity right in front of it.“

What could it have done differently?

“In Peloton’s case, the fatal accident and multiple injuries involving small children meant a recall was all but inevitable,” explains Goldberg. “Peloton missed its chance to take control and demonstrate—not just assert—its commitment to safety by announcing that it was proactively halting sales and recalling the Tread+ on its own volition so that it could thoroughly investigate what happened and take the necessary steps to keep it from recurring.”

The takeaway: Crises can offer opportunities for your organization to build trust. If you can admit to mistakes and offer transparency to your process, you can transform a bad headline into a story of resilience.

This article is part of our PR Daily Leadership Network. Get more insights on how to meet the challenges of the year ahead by becoming a member today.

This wisdom from the PR Daily Leadership Network spotlights five leadership facets that can protect the future of a company and a PR career.

.1. PR LEADERSHIP WHY. Colonial showed how showing why can help to win. WHY did Colonial pay the ransom? Saying anything like “because we had to” could have made millions think the company gave in to the bad guys instead of resisting demands. But Colonial wisely said: “It was the right thing to do for the public.” Perfect!

.2. PR LEADERSHIP OF WHOM. Pfizer led not only in scientific development of a substance that gives public protection but also in PR reports of protective information so that the public will be protected by the real stuff not a debunked treatment.

.3. PR TREATMENT BY WHOM. The Facebook situation shows how the best PR spokesperson for a company may be not the highest-ranking person but one who has the training and experience to best defend the company including that highest-ranking person. Facebook’s point-by-point rebuttal of charges is good but over 100 million Americans will cheer for the company more if the medical director and PR chief announce a Facebook Institute for Cancer Research at Memorial Sloan Kettering Cancer Center to find a cancer vaccine that will save millions of lives. What the public cares about even more than “who’s right” is “what’s in this for us?”

.4. PR LEADERSHIP CLARITY. “Being apolitical is not an option,” says PR expert Jon Goldberg, so to reduce PR peril, “give employees clear guidance on what is and is not acceptable.” Presidents of both parties have had press secretaries try damage control by explaining what the boss “meant” by what he said. Companies can avert the need for such attempted walk-backs for top and other employees by making clear what’s okay and what isn’t.

.5. PR LEADERSHIP SOON ENOUGH. At least Peloton’s Foley apologized but as Foley and Goldberg both point out, sooner would have been better all around.

As PR Leadership Network members see repeatedly, just trying to lead may not be enough. Company managements and PR recruiters need PR leaders who recognize the why, who, when and more of successful PR leadership.