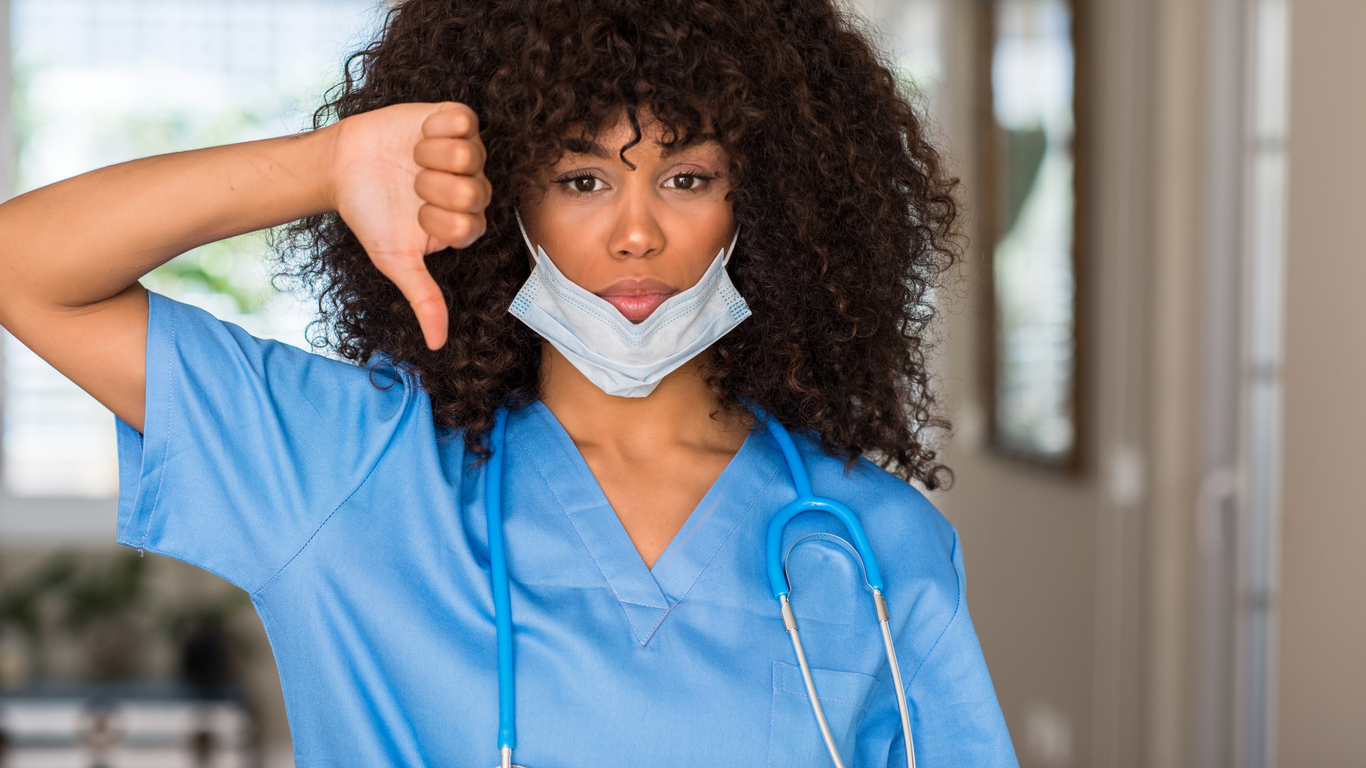 An attempt at on-the-job humor went sideways when a group of nurses at an Atlanta hospital got fired after
a video posted to social media about their labor and delivery patient “icks” went viral.

Throughout the clip, which was shared to TikTok last week, several nurses who worked at Emory University Hospital Midtown in Atlanta, Georgia mocked patients. They also complained about their biggest grievances when helping to care for expectant mothers. “Saying you don’t want any pain medicine, no epidural, but you are at an [eight] out of 10 pain,” said one woman. Another chimed in with, “When we’ve already told you to push the call light, but every five minutes, your family members come up to the front desk asking for something else.”

Why it matters: The post stirred up a whole host of people relaying their negative experiences at the hospital, creating bad buzz for Emory. (Emory responded quickly, taking to Instagram with a statement condemning the video and indicating the employees had been terminated).

The Atlanta Daily World reported that “the incident shed light on an unfortunate truth about maternal mortality rates in Georgia. The state has the highest maternal mortality rates in the United States, including 46.2 deaths per 100,000 live births for all women and 66.6 deaths per 100,000 live births for Black women,” making joking about the labor and delivery process even more unsavory.

We’re curious what policies and guidelines Emory Healthcare had in place to help employees make informed decisions about social media posting. Many companies have at least a one-liner in their onboarding manuals to alert new hires to the risks of poor social media judgment, but with so much at stake it makes sense to keep the conversations ongoing with regular training and reminders.

Morning Consult reports that awareness of the metaverse remains low for the American public.

Metaverse awareness is still low. While there’s no shortage of metaverse-related news, 62% of U.S. adults said in November that they’d seen, read or heard “not much” or “nothing at all” about it — a figure nearly unchanged from July.

But understanding the potential and influence of the metaverse is far from given. Communicators with ties to the metaverse will need to offer continuous information and education to help their publics understand not only what the metaverse is, but why they should be excited about immersive technology.

Another day, another blue check

Twitter is still tweaking their blue check situation, this time with a newly updated plan for charging users for the privilege of being verified.

That’s right, users that sign up on an iOS device will have to pay $11 per month – or $132 per year – to get their own blue checkmark, or alternatively, you can pay $8 per month if you sign up on the web.

Because Twitter, evidently, has worked out that Apple’s 30% in-app payment tax will cut into the potential profits from the program too much, so rather than trying to work out an alternative system, or maybe give people even more for their dollar, Twitter’s instead looking to pass on the tax directly to users.

So if you sign up on iOS, you’ll be paying a 37% mark-up, for absolutely nothing extra.

The blue check will come with some perks, like listing posts from verified users higher than those who haven’t paid for the extra service. Elon Musk is hinting that “Twitter Blue” will also see half as many ads as the non-paying user public, but that still seems to be up in the air and at least partially dependent on whether blue-checks achieve critical mass. And paid accounts will be able to post longer videos rather than YouTube clips. Crucially, the newly adjusted plan will require that accounts be reviewed before verification to avoid some of the crash-and-burns that resulted from earlier iterations of the verification plan. Official brand accounts will get gold checks; government accounts will get gray.

Why it matters: Let’s see if this sticks. The verification plan has been in so much flux since Musk’s takeover that it’s hard to know how seriously to take this latest update. In the meantime, we’re pleased to see that contributor-added, context-bearing Community Notes are now visible to all Twitter users in a step meant to help combat misinformation. (Only U.S.-based users can create them although expanded access is planned for other regions in the future.)

NiemanLab published a thoughtful take on revamping journalism’s image with the help of self-reflecting journalists willing to take on a slight PR role.

From Ayala Panievsky, writing for NiemanLab:

If journalists genuinely believe that journalism is essential for society, they shouldn’t shy away from saying exactly how and why. Dear reporter, editor, and news host: How have you actually contributed to people’s everyday life this past year? What have you done to expose discrimination, corruption, or exploitation? How does your work protect us against disinformation operations or voter suppression?

How about publishing accessible “annual reports,” where journalists tell their audiences simply and directly how their reporting has been helpful this year? How have real people benefited from your reporting? What did you do for the community? If “the watchdog of democracy” remains a vague term with little to do with people’s lives, no one will care when it crumbles.

Why this matters. It’s true that the profession of journalism has come under fire in recent years, and Panievsky makes an interesting point that journalists have a responsibility and authority to help the public understand the importance of their work. How can we as PR professionals help in that? How can we cut through misinformation, offer truth and set the record straight?

One Response to “Emory’s nursing TikTok nightmare, Twitter Blue is back and more”

More PR wisdom could mean less grief—and billions more in market value—for Meta (down from 333 to 119 in the past year) and for Twitter.

The main thing each company can better communicate is an answer to the public’s #1 question about any major company or industry: “What’s in this for us?”

The value people place on a product depends on what can it do for you, right? But PR Daily’s Emily Hackett wisely reports that “understanding the potential and influence of the metaverse is far from given.” And look what she says about the benefit you get with Twitter: “If you sign up on iOS you’ll be paying a 37% markup for absolutely nothing extra!”

Years ago millions of people thought the key to PR success was being LIKED but today PR success is more recognized as coming from the public liking ITSELF. Either company, if it announces spending a billion dollar investment in a health research center to protect the public against heart disease and cancer, can certainly expect 100 million enthusiastic fans among voters, influencers and legislators.

More awareness of “what’s in it for us” can generate a massive public appreciation—and market value—for companies seen as heroes of health.

Is it happening? Not in 2022 but happy new year, perhaps in 2023. Companies that gain millions of public supporters may gain billions in public valuation. And not just eventually but now in the year to come. Look how a company’s public relationship value soars if another 100 million Americans realize: “Hey, these guys are trying to save our lives!”