Elon Musk is at it again. A leaked internal email shows Musk is instating a strict return-to-office policy for Tesla employees, writing, “If you don’t show up, we will assume you have resigned.”

Musk insinuated that remote workers don’t pull their weight in a Wednesday tweet:

They should pretend to work somewhere else

I'm actually able to get more done at home, but that's cool. Be judgemental.

Still have the issue of people working in close proximity (in the office) which increases the chance of getting COVID. Good to be safe at home until that issue is resolved.

Are you kidding me? I am honestly way more efficient working remotely because of useless chit-chat. I think most IT and Technical people would agree. There is always someone talking just to avoid doing real work

It’s yet another reminder that internal comms should be treated as if they’re going to be seen by your external audiences — especially as it relates to treatment of employees and employer branding.

Meta COO Sheryl Sandberg announced her imminent resignation from the company this week in a post to Facebook.

The lengthy post details Sandberg’s initial experiences at the tech company and highlights some of the accomplishments achieved over her 14-year tenure.

“It’s because of this team – past and present – that more than three billion people use our products to keep in touch and share their experiences,” she wrote. “More than 200 million businesses use them to create virtual storefronts, communicate with customers, and grow. Billions of dollars have been raised for causes people believe in.”

Sandberg also addressed some controversy that Meta has faced with regard to how it keeps its users safe and their information private:

The debate around social media has changed beyond recognition since those early days. To say it hasn’t always been easy is an understatement. But it should be hard. The products we make have a huge impact, so we have the responsibility to build them in a way that protects privacy and keeps people safe. Just as I believe wholeheartedly in our mission, our industry, and the overwhelmingly positive power of connecting people, I and the dedicated people of Meta have felt our responsibilities deeply. I know that the extraordinary team at Meta will continue to work tirelessly to rise to these challenges and keep making our company and our community better. I also know that our platforms will continue to be an engine of growth for the businesses around the world that rely on us.

What it means: Sandberg’s message touches on nearly every aspect of her time with Meta, from her “Lean In” book to how the structure of the company will change after she departs in the fall. It’s a good example of executive messaging that shines a positive light on an organization while still attempting to address some controversies.

A new report from Morning Consult shows the relative importance of a company’s ESG commitments to a shopper’s decision on where to spend their money. 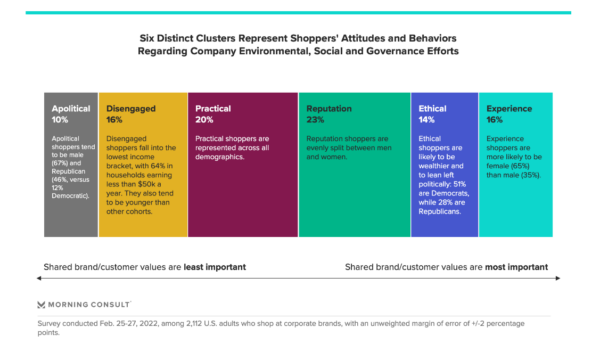 Morning Consult’s breakdown of six “shopper profiles” reveals three groups in which shared values are the most likely to affect where customers shop.

The data shows that while many shoppers say they choose their brands based on ethical and social values, many consumers won’t actually put their money where their mouths are.

show us that you care. for years, you made it clear that you don't, even going as far as donating money to politicians who supported a certain Flordia bill targeting the very community you're trying to suck up to right now.

you want to fix things, then fine. SHOW US

Others called on Disney to do more than just publish Pride Month messaging:

Nice tweet, but please give us more LGBTIQ characters. Otherwise it feels hypocritical.

I guess pride only matters when you can profit off of it with rainbow merch and twitter posts advertising LGBTQ+ characters on your streaming subscription service. pic.twitter.com/NRxgo9r77c

Why it matters: It’s no surprise that audiences are having a hard time believing in Disney’s Pride Month messaging following the “Don’t Say Gay” bill controversy. It should serve as a good reminder to PR pros that rebuilding trust with audiences after a scandal takes more than a few public statements and tweets.