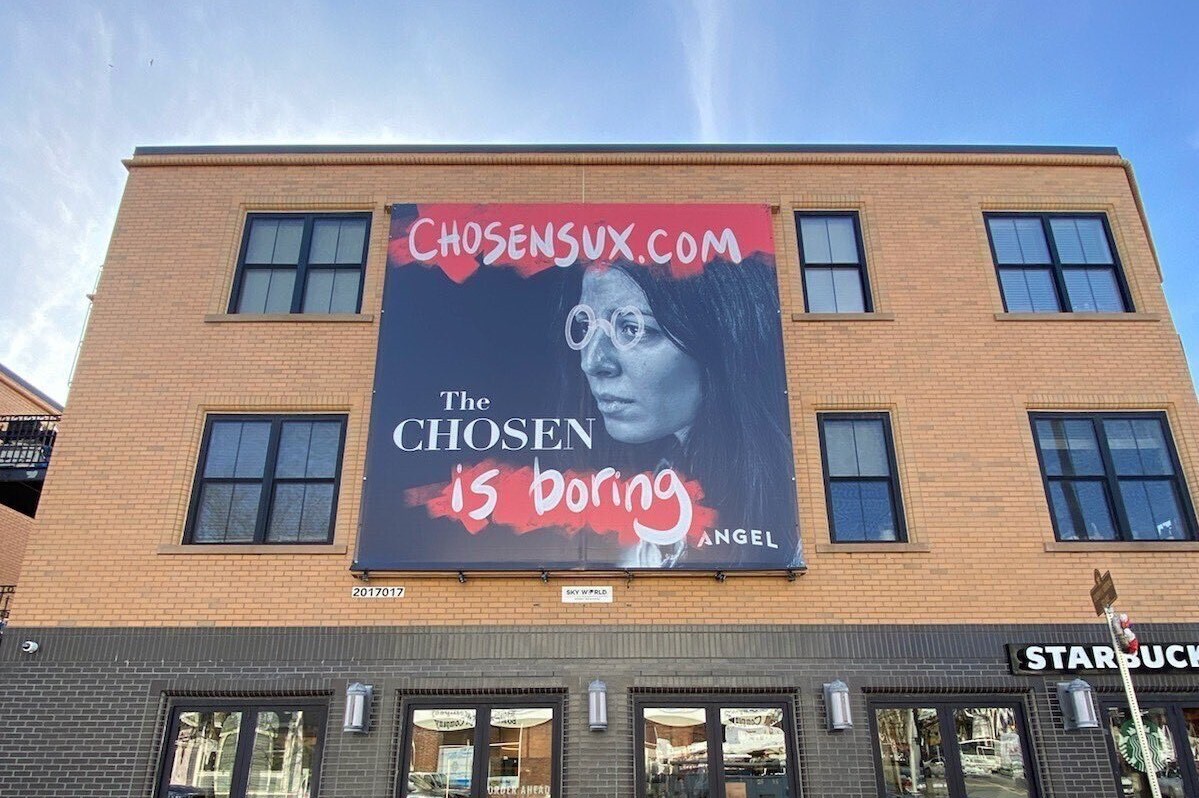 The popular TV series “The Chosen” faced criticism for a recent marketing campaign involving billboards placed throughout the country, not praising, but mocking the show. By using a bit of reverse psychology, the anti-ad was an attempt to garner attention and interest by encouraging people not to watch the show.

Signs were designed to look like they had been defaced with graffiti saying, The Chosen is boring with chosensux.com painted across the top. The URL leads to a YouTube page called StopWatchingTheChosen, with a video of a comic rendition of the devil teaching a class of minions how to prevent people from watching the series.

The campaign was not announced, and show creators never mentioned they were the ones behind the ads, which led some fans to believe the attacks were real. Once they discovered it was satire — which is evident once you land on the video — some thought it was hilarious, clever and engaging. But others were disappointed and felt misled by a TV series (a brand) they had trusted.

This prompted a lengthy apology by series creator and writer, Dallas Jenkins, who addressed fans on Facebook Live saying, “We should have brought you in on the campaign…We failed to include you, our most important partner…I screwed up…I’m sorry.”

Out of nearly 600 comments on YouTube so far, reactions to the campaign and to Jenkins’ message are mostly positive. People praised the creativity of the billboards and video while commending the attempt to reach a broader and younger audience. One person wrote:

Thanks Dallas for getting our Gen Z/Millennial humor.

As a huge CHOSEN fan I thought this was funny and is purely satire like that in The Screwtape Letters by C.S. Lewis. No need to apologize Dallas!

While Jenkins expressed regret for not notifying fans about the campaign in advance, he defended the marketing plan as way introduce the show to more people with the ultimate goal of reaching 1 billion views.

Takeaway No. 1: Marketing and PR, while often viewed as separate functions, are highly dependent upon one another.

The most clever and captivating ad campaigns can stumble out of the gate if the PR component isn’t there to help pave way forward.  Even with market testing and sampling, there’s still the possibility that your audience — fragmented into multiple audiences — will have different interpretations of the message and respond in a way that wasn’t anticipated.

Although PR and marketing functions are becoming more integrated, there’s still a tendency for each side to stay in their lane and act independently. It works fine, except when it doesn’t. The best practice, when it comes to a broad messaging campaign, is to ensure coordination and cooperation from all sides.

Creative content development is vital for brands vying for attention in today’s competitive and saturated marketplace. But the creation and implementation of any campaign should be guided by the existing attitudes, beliefs and behaviors of the audience.

If marketing is flying the plane, PR is air traffic control ensuring all is clear for takeoff. They need each other.

Takeaway No. 2: The value of having an established communication presence with ongoing dialogue between your brand and the public.

Before the series debut in 2017, Jenkins released videos explaining the purpose of the project, its goals and how people could get involved. Using multiple social media platforms, he provided updates on filming and fundraising, giving fans and behind-the-scenes look at what is happening with production and distribution.

The quality of the series — earning a 100% rating on Rotten Tomatoes — coupled with the rapport Jenkins has with the audience, is the reason “The Chosen” has become the highest crowdfunding project in media according to IMDb. It’s also the reason that when this PR issue popped up, there was an existing line of communication that made Jenkins’ apology possible.

The effectiveness of an apology is not solely based on how well language is crafted. It also hinges on the preexisting relationship between a brand and its audiences.

All too often, companies neglect their communication efforts until a PR crisis hits. But you can’t forge a positive relationship between the public and your brand overnight, especially in the wake of a crisis. It takes time. Connecting with an audience when things are smooth puts you in a better position to respond when conflict arises.

As an admirer of “The Chosen,” I’ve eagerly recommended it to friends and family as a binge-worthy experience. As a PR pro, I applaud the show’s unconventional communication strategy that aligns with the show’s brand identity: outside the box, yet authentic and not gimmicky.

Even though the initial mishandling of the anti-ads caused a hiccup, the creators confessed their mistake, and owned it (they could have literally blamed it on the devil). They took corrective action and are using this moment as an opportunity to expand the reach of the series with the help of an enthusiastic fanbase that, for the most part, is willing to offer grace and forgiveness.

Joe McLeod is the managing partner at McLeod Communications, a public relations from based in Lakeland, FL. He’s also co-host of the ‘On Message’ podcast.