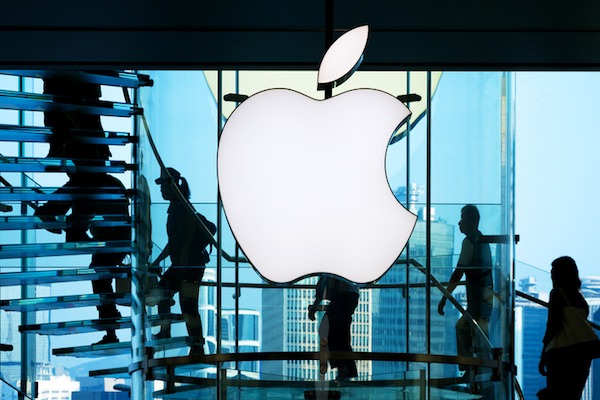 You might not want to put your foot in your mouth, but Fruity Pebbles is hoping its sneaker drop with Lebron James will still be tasty. 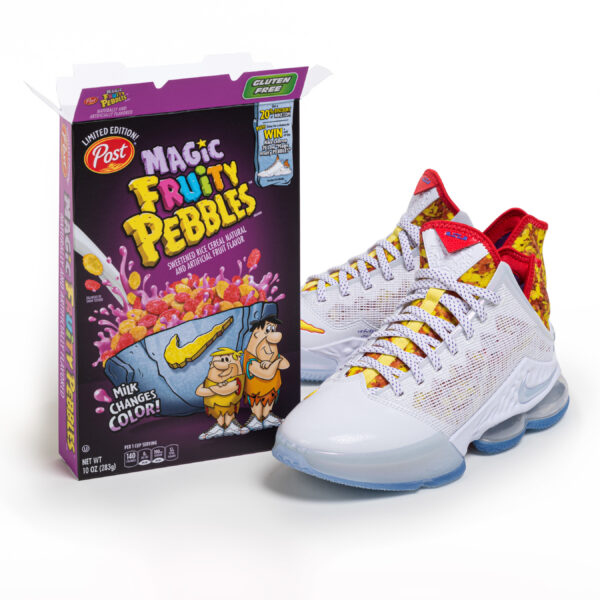 “The PEBBLES brand is all about finding new ways to surprise and excite fans,” said Leah Broeders, Head of Licensing for PEBBLES cereal. “We’re thrilled to be partnering with Nike to launch this one-of-a-kind color-changing collab just in time for National Cereal Day. When we learned that LeBron was a HUGE fan of the cereal when he was a kid, we knew this was a no-brainer. It’s truly the biggest partnership since the stone ages!”

Apple announced this week it will no longer sell its products in Russia in response to the country’s invasion of Ukraine, becoming the latest Western company to distance themselves from Russia.

While Apple doesn’t have any physical stores in Russia, all products on the online Apple Store are now listed as “unavailable.”

Apple joins Nike and Dell, among other businesses, in pulling its online products from the country.

“We have taken a number of actions in response to the invasion. We have paused all product sales in Russia. Last week, we stopped all exports into our sales channel in the country. Apple Pay and other services have been limited. RT News and Sputnik News are no longer available for download from the App Store outside Russia. And we have disabled both traffic and live incidents in Apple Maps in Ukraine as a safety and precautionary measure for Ukrainian citizens,” an Apple spokesperson told CNBC in a statement.

What it means: Major multinational companies are feeling pressure to respond to Russia’s unprovoked invasion to the Ukraine. A recent Morning Consult study found that most Americans are in favor of businesses cutting ties with the country completely. In this case, taking a stand on a political issue also means taking a stand on a humanitarian issue; Consumers around the world have decided that what Russia is doing is wrong, and expect companies to take action.

New Morning Consult data shows people would prefer companies to cough up the funds to fight climate change, rather than funding the effort through raising prices on consumer goods. 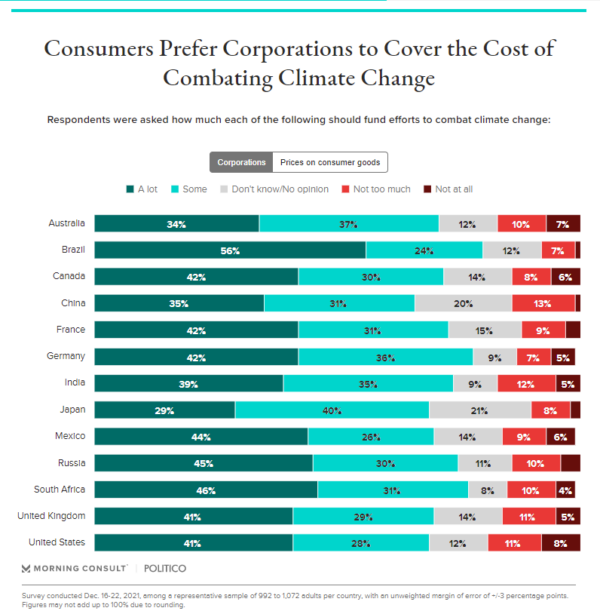 Morning Consult’s Jason McMann writes that the dollar amount needed to reach the United Nations’ goal of net-zero carbon emissions by 2050 is $9.2 trillion a year—“an increase that’s equal to half of annual global corporate profits for 2020.”

Communicators face a quandary here: Does the responsibility to be transparent about price increases outweigh the fact that consumers overwhelmingly do not want to foot the bill for companies’ green efforts?

To avoid having to make that choice, McMann suggests that companies move quickly to adopt green practices while the price of doing so is still relatively affordable.

“…those that do move fast and early to green their supply chains are likely to secure long-term benefits in the form of greater market share, as long as they are able to bear the upfront costs,” McMann writes. “By contrast, late movers and companies that don’t heed consumers’ price hesitancy risk ending up green with envy.”

Communications professionals in Ukraine have created a Google form where journalists can request verified first-hand information, photos and videos from eyewitnesses in Ukraine.

Journalists can request on-the-ground information by filling out the form, and can expect to receive “truthful, undoctored” content from the comms pros running the effort, per the press release shared with PR Daily.

“Before February 24th, 2022, we were communication specialists in different companies,” the press release says. “But due to Russian terror in our homeland, we had to leave our jobs and unite our power to protect our land on the information front. We are volunteering to give the voice of truth from Ukraine. Because we believe that its power is stronger than lying Russian propaganda. Now we connect the media with the eyes, ears, voices, and minds of Ukrainians who had to fight for sovereignty and democracy values in the 21st century.”

Why it matters: To journalists, information is currency. In times of war and government upheaval, it can be difficult to verify witness accounts, photos and videos if reporters are unable to be on the ground capturing them themselves. This is a good faith effort by PR pros to volunteer their time—and potentially risk their personal safety—to make sure reporters are getting accurate, nonbiased information.

It’s also an example of how PR pros can become essential resources for journalists by prioritizing accurate information, and assets to help tell compelling stories.