Who doesn’t love a good, long soak in a bathtub at a nice hotel?

New analysis from Hotels.com shows searches for hotel rooms with tubs have increased by 35% in the last three years, showing travelers still love their bath time.

“The pandemic impacted nearly every aspect of our lives, including how we search for our next hotel stay,” said Mel Dohmen, senior brand manager at Hotels.com. “The amenities we love and are looking for in 2022 reflect everything we’ve felt and experienced over the past few years. From hotels that helped us relax and take the edge off to those that complemented new hobbies like cooking and skiing, there’s a lot to learn about where travelers are going this year based on how they search for the perfect hotel stay.”

The campaign shows how you can drive media stories with proprietary user data—particularly when you can use that data to explain hot trends in the market.

Clubhouse backs out of SXSW over Texas’ discriminatory LGBTQ+ policies

“We realized we wouldn’t feel comfortable asking LGBTQ+ voices from the Clubhouse community to come to Texas…and if we feel that way, we shouldn’t be there at all,” the company shared on its official Twitter account.

instead, we’ll be holding our panel “The Power of Voice” in Clubhouse and donating SXSW travel costs to local organizations. we're also going to hold a series of rooms supporting trans speakers and creators 🏳️‍⚧️

A subsequent tweet described how Clubhouse will instead donate funds to local organizations, host its panel on its own audio-only app and plans to “hold a series of rooms supporting trans speakers and creators.”

Maya Watson, head of marketing for Clubhouse, followed up with a tweet inviting other brands to forego the conference and host panels on the Clubhouse app instead:

This was an easy decision and welcome and support brands, talent and other panels to host on @clubhouse. https://t.co/rgpOwJXQQz

Why it matters: With several states adopting restrictive and controversial LGBTQ legislation, companies that have openly supported the LGBTQ community are faced with a choice. Some are starting to keep track of the companies supporting and engaging with lawmakers that are pushing bills that critics say are causing real harm in their communities.

A survey from Morning Consult shows Americans are split 50/50 about whether they’d boycott their favorite sports team if it had a sponsorship agreement with a company with ties to the Russian government. 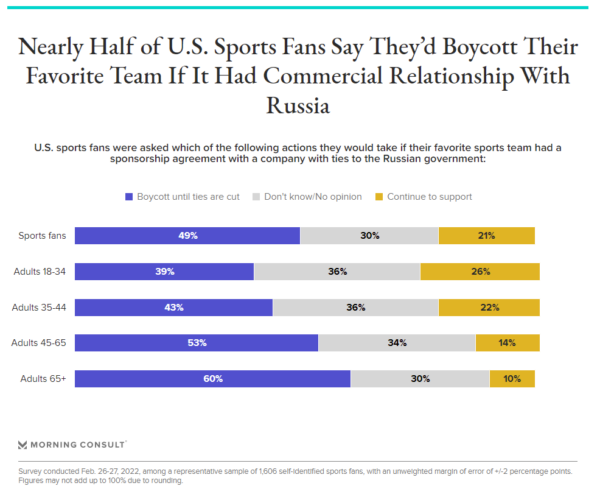 The most notable example of an American sports entity caught up in the fallout from the invasion is the Haas F1 Team, the lone U.S.-based team competing in the mostly European Formula 1 racing series. Haas added Russian fertilizer producer Uralkali as a title sponsor prior to the 2021 season and named Nikita Mazepin, son of Uralkali co-owner Dmitry Mazepin, as one of its two drivers. The elder Mazepin has close ties with Putin and even met with the leader on Thursday following the start of the Ukraine invasion. In preseason testing last week, Haas stripped its car of Uralkali branding and its Russian flag-themed livery, but has yet to determine whether Mazepin will keep his spot on the grid.

Many U.S.-based multinational companies have already moved to sever ties with Russian businesses and its government, including Apple, Google and Nike.

Rivian backtracks on price increases after outrage from preorder customers

Electric vehicle company Rivian is reversing the price increases it announced earlier this week for people who had preordered its electric pickup truck and SUV.

TechCrunch first reported that the company announced it would raise the price of its pickup by 17% and its SUV by about 20%, pushing their respective base prices to $79,000 and $84,000. At that point, Jiten Behl, chief growth officer for Rivian, blamed the sizeable increase on “inflationary pressure, increasing component costs, and unprecedented supply chain shortages and delays for parts (including semiconductor chips).”

Customers were not happy, some of whom had placed their order years before a single car came off the assembly line.

“As we worked to update pricing to reflect these cost increases, we wrongly decided to make these changes apply to all future deliveries, including pre-existing configured preorders,” Scaringe wrote. “We failed to appreciate how you viewed your configuration as price locked, and we wrongly assumed the announced Dual-Motor and Standard battery pack would provide configurations that would deliver price points similar to your original configuration. While this was the logic, it was wrong and we broke your trust in Rivian.”

Scaringe also acknowledged that the company’s comms strategy could have been better, writing that it didn’t give consumers enough insight into the rationale for the price hikes.

Now, Rivian says it will honor the original price for all preorders placed prior to March 1, and offers to reinstate original pricing for customers who had canceled their preorders following the price hike news.

What you should know: Even for consumers who can afford a luxury electric vehicle, an unexpected price increase of nearly $20,000 is often untenable. Scaringe’s letter offers an exemplary mea culpa as the car company tries to rebuild trust with audiences that feel betrayed by the price hike. Not only does the letter take responsibility for the company’s mistake, it explains why it happened and why it’s being reversed in great detail. Comms pros should look to Scaringe’s letter as a great example of audience-first CEO messaging.