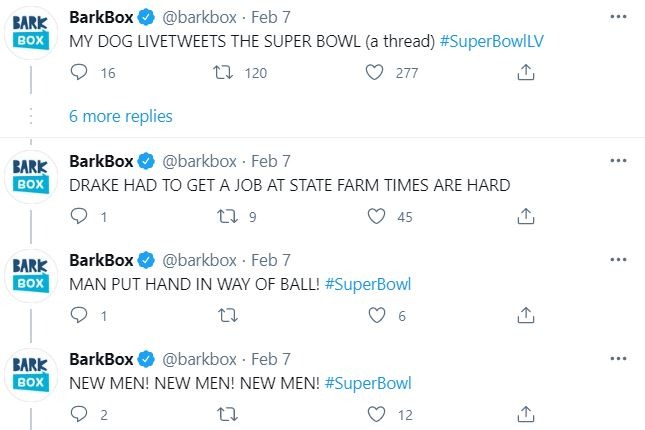 Cats might be the darlings of some internet circle, but BarkBox, a subscription service for toy and treats for furry family members, is putting its best paw forward with commentary and memes on Twitter. The team is tuned into pop culture with tweets about ABC’s “The Bachelor,” and Super Bowl LV.

Alexis Nelson, social media manager for Bark, the parent company for BarkBox, breaks down the team’s approach to joining the conversation online for Super Bowl LV and how other brands can think about joining a trending topic on social media.

PR Daily: How did you develop the “voice” for your tweets on the big game?

Nelson: We love a dog voice in which they know a little about what is going on, but because everything is through a dog’s point of reference, they’re going to be a bit confused about the details. What would dogs recognize? Men, balls, and grass. What would they not recognize? Everything else. Any sport becomes a convoluted game of fetch. Lines on the field are confusing, because… why would someone draw all over the park?

ALL THE MEN PUSH EACH OTHER AND FALL DOWN! THEY ARE NOT GOOD AT FETCH!

PR Daily: What are the rules for brands tweeting about the Super Bowl and engaging with other brands during the game? Any rules of the road worth mentioning?

Nelson: The Super Bowl is a unique American holiday in advertising where it makes sense for brands to have funny conversations with each other on social media, more so than other moments throughout the year. There’s something so silly about seeing BarkBox, a dog company, “talk” to a brand like Mountain Dew. It makes little sense, but it’s also absurd, and therefore, delightful.

It’s important to find brand conversations where it would make sense for your brand to interject. Nothing makes a brand tweet fall flat like it seeming forced or contrived. So many times when we’re live tweeting as a team, there are things we want to say as humans who value comedy that we hold back on because we think to ourselves, “Why would dogs care about this?”

Also, one important note about playing in the absurdity of brands interacting is there needs to be some self-awareness that all of this is made up. The Super Bowl is a strange and delightful celebration of junk food, sports, and American advertising. If you’re serious and can’t acknowledge that there’s something comical in all that, your content won’t be as funny, and your message won’t resonate with followers. 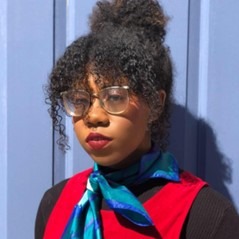 PR Daily: What kinds of messages were most effective for you during the game?

Nelson: Humor always resonates most with our audience, but the jokes that hit hardest were the dog-digs at the commercials. It’s seen as taboo to acknowledge another brand’s existence when you’re trying to get your own brand noticed, but if you’re making the same commercial jokes that a follower’s friends are exchanging about in a group chat, they’ll like you more.

The game of getting people to like your brand is similar to getting people to like you. It’s an art, and it can be fun because everyone gets to buy into this playful improv-esque world of make-believe personas. Sunny D is a little depressed. Moon Pie is super quirky. Slim Jim is the silly frat bro with a heart of gold. Denny’s is just weird! And for us at Barkbox, we pass the mic back and forth between ourselves and the object of our obsession: our dogs.

PR Daily: What kind of preparation did you do before the game? Did you watch commercials ahead of time or pre-write different tweets?

Nelson: We share a lot of content during Super Bowl weekend. We prep our own deliverables (Dogs That Look Like Tom Brady, our Commercial That Wasn’t Allowed to Air, finding dogs that look like All-American Dads™️ to pose with squeaky beer toys), but in terms of live tweeting, we decide on an angle beforehand and stick with it. There’s something fun and chaotic about experiencing the game and commercials in real time with audiences at home. This also gives us a lot of flexibility in terms of interacting with other brands during the game.

Another Tom Brady Big Game™️, another year I get to use this video 😎 #SuperBowl pic.twitter.com/hkjuRL7w3X

PR Daily: How did you measure your success? What metrics mattered to you?

Nelson: When we first started doing our Super Bowl shenanigans, we were a super small business. We did it as an attempt at growth hacking or getting any sort of growth on no budget. Since then, it became a tradition and was a lot of fun, and the engagement metrics we would see reflected that our people, dog people, were having fun with us, too.

Today, the metrics that matter are reach, engagement and trying to get at least once piece of content to pop or go “viral” in a big way.

PR Daily: Any big lessons you are taking from this campaign? Advice for others on social media right now?

Nelson: As we’ve practiced the whole “talking about the thing everyone is watching” game, one exciting thing for small brands in the Super Bowl advertising conversation today is that there was coverage and attention for brands who did not air a Super Bowl commercial. This year, more than any other year, there has been so much chatter about this. With that, there was more “competition” on social than in the past, but if you create a fun thesis statement, and you commit to the “heckin’” bit, for the most part, you have a better chance of success.

Also, hiring comedians has worked well for us. No one can read a room, in-person or online, better than someone who dabbles in stand-up comedy.