Halloween celebrations looked different this Oct. 31, as many cities, counties and countries were on lockdown due to COVID-19 cases. 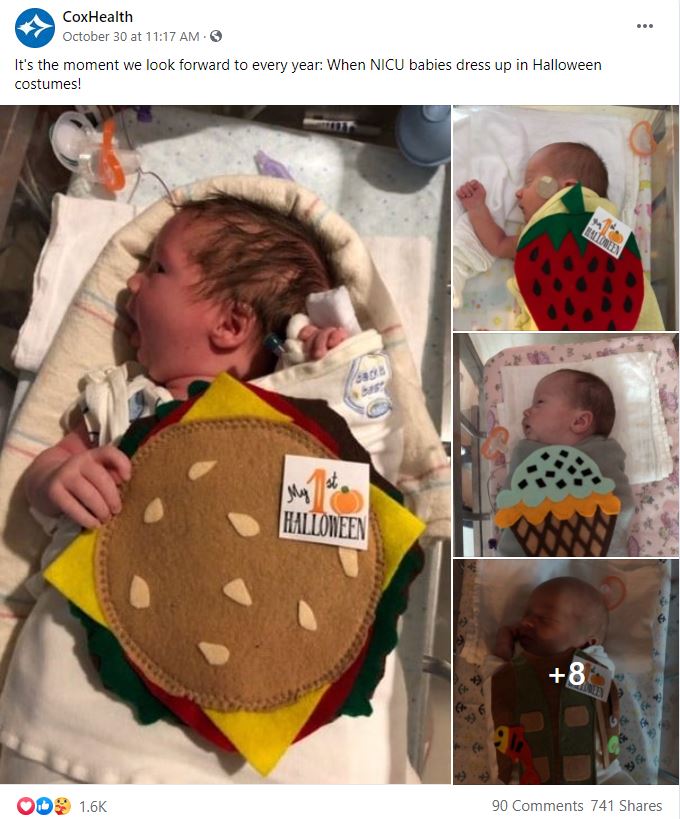 hospital’s work, as well as its clever costumes for the infants.

The restaurant chain filed for Chapter 11 bankruptcy protection, announcing that all of its 130 locations (both corporate-owned and franchised) will remain open, unless locations must follow specific COVID-19 restrictions.

Over the last two years, Friendly’s has made important strides toward reinvigorating our beloved brand in the face of shifting demographics, increased competition, and rising costs. We achieved this by delivering menu innovation, re-energizing marketing, focusing on take-out, catering and third-party delivery, establishing a better overall experience for customers, and working closely with our franchisees and restaurant teams. Unfortunately, like many restaurant businesses, our progress was suddenly interrupted by the catastrophic impact of COVID-19, which caused a decline in revenue as dine-in operations ceased for months and re-opened with limited capacity.

… Importantly, it is also expected to preserve the jobs of Friendly’s restaurant team members, who are the heart and soul of our enterprise and have been critical to the progress we have made in transforming this iconic brand.

Why it’s important: As the COVID-19 crisis continues, organizations across industries must continue to respond—whether that’s through virtualizing their offerings, creating digital-first and mobile-first content, announcing layoffs and restructuring strategies, declaring bankruptcy, closing locations and more. Be prepared as much as you can, but also prepare your employees for potential challenges and bad news before they read about it in headlines.

Happy Birthday, @MeCookieMonster! We hope your day is filled with tons of cookies just for YOU! #HBDCookieMonster pic.twitter.com/ANKNeKRXH3

It’s a simple tweet and graphic, but has been amassing retweets and replies, some from viewers sharing their character costumes:

Storytelling is one of communicators’ most powerful tools, but don’t just think of your employees, consumers and partners—consider the characters you’ve created, too. Humanizing the faces of your brand can make you more relateable and trustworthy in consumers’ minds.

Socialbakers recently published its report “U.S. 2020 Elections: What Social Media Data Tells Us About the State of the Presidential Race,” which revealed 72% of U.S. citizens of voting age are actively using social media platforms.

When comparing President Donald Trump’s Twitter profile to presidential candidate Joe Biden, the numbers seem to swing overwhelmingly in Trump’s favor—but considering Trump has more than 87 million followers compared with Biden’s nearly 12 million followers, it follows that Trump would have the larger numbers.

However, when looking at Twitter interactions (“likes,” replies and retweets) as a percentage, Biden’s engagement has been quickly growing. In January, Biden amassed 8.2% of the interactions that Trump did. By August, Biden’s interactions grew to 50.34% of Trump’s interactions: 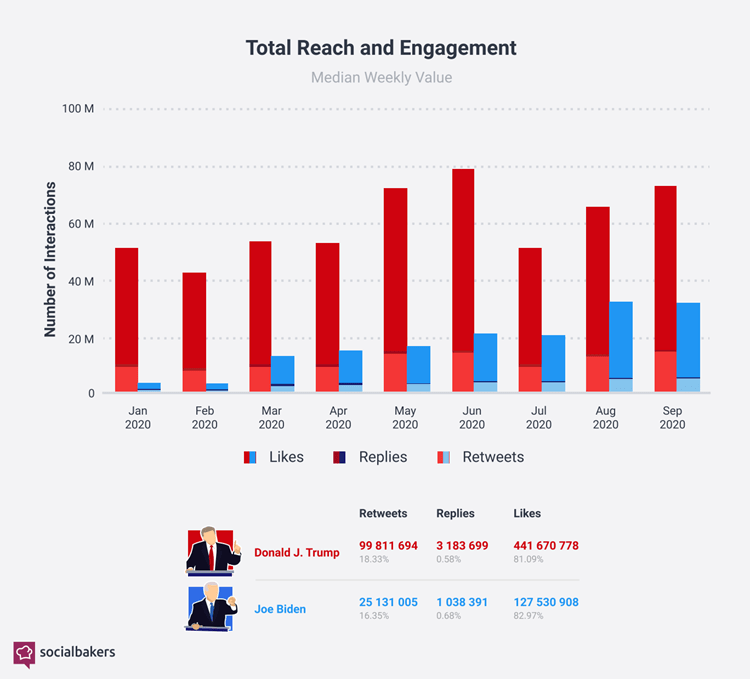 The comparison shows the growth of Biden’s social media team, Trump’s massive Twitter presence and the importance of measuring growth as well as showing KPIs in context—especially when comparing yourself or your organization to a competitor.

Fox TV’s social media team opened its week of Twitter engagement with an image from one of its shows, which it turned into a meme about self-care:

Mentally preparing for what this month might bring. pic.twitter.com/7531aC4zbQ

The effort shows off an example of a brand mention that’s subtle enough to not be an ignored marketing message, yet clever enough to reach and interest younger consumers.

What do you think of the effort? Share your thoughts under the #DailyScoop hashtag.

After being mentioned in “Rick and Morty’s” fourth season finale, Wrangler is partnering with the Adult Swim show to launch a jean jacket and two t-shirts that feature “custom hand-painted artwork of the NX5 laser featured in the finale”—the same planet-removing laser that “Rick and Morty” creators Justin Roiland and Dan Harmon joked was sponsored by Wrangler.

Sorry about almost destroying the Earth with the NX-5 – our new marketing strategy is a lot less aggressive. Stay tuned for the Wrangler x @rickandmorty collection launch to suit up with indestructible styles. Get on the list: https://t.co/3Sg06cS6iu pic.twitter.com/jtiDh1qaFv

Though Wrangler’s mention in the show wasn’t sponsored, the clothing company jumped at the chance to partner with the popular series. The collection will launch on Nov. 10 and promote the Adult Swim Festival, held on Nov. 13-14.

It’s far from the first collaboration with Roiland and Harmon. McDonald’s, Pringles and State Bicycle Co. are a few of the other brands jumping on the intergalactic pop-culture wagon—er, spaceship:

As you prepare yourself and your organization for Election Day on Nov. 3, consider enlarging your mind with a new book—and take a break from scrolling through breaking Twitter trends and news media updates. Don’t forget to vote, if you haven’t already, then reward yourself with a selection below (or a title you’ve had your eye on).

Share your efforts with us below, through our Twitter poll and under the hashtag #DailyScoop, and we’ll share the results in Wednesday’s roundup. Is there a question you’d like us to ask in an upcoming poll? Let us know!