“Sesame Street” and HBO Max are helping families talk about racism with an upcoming program titled, “The Power of We: A Sesame Street Special”:

In it, the “Sesame Street” characters, celebrity guests and more will “explore their own identities and skin colors and come to understand what it means to be ‘color-proud.’”  The Sesame Workshop is also offering viewers downloadable activities, certificates and discussion guides to prepare for the Oct. 15 special.

“We believe that this moment calls for a direct discussion about racism to help children grasp the issues and teach them that they are never too young to be ‘upstanders’ for themselves, one another, and their communities,” said Kay Wilson Stallings, executive vice president of creative and production at Sesame Workshop, in a statement.

Communities have always turned to Yelp in reaction to current events, and our User Operations team already places alerts on business pages when we notice an unusual uptick in reviews that are based on what someone may have seen in the news, rather than on a first-hand experience.

Now, when a business gains attention for reports of racist conduct, Yelp will place a new Business Accused of Racist Behavior Alert on their Yelp page to inform users, along with a link to a news article where they can learn more. https://t.co/1K2bJ46uM8

Here’s the alert notification, which Yelp will place on any organization’s page that is receiving a rise in reviews connected to a comment or action from the business’ owner or workforce: 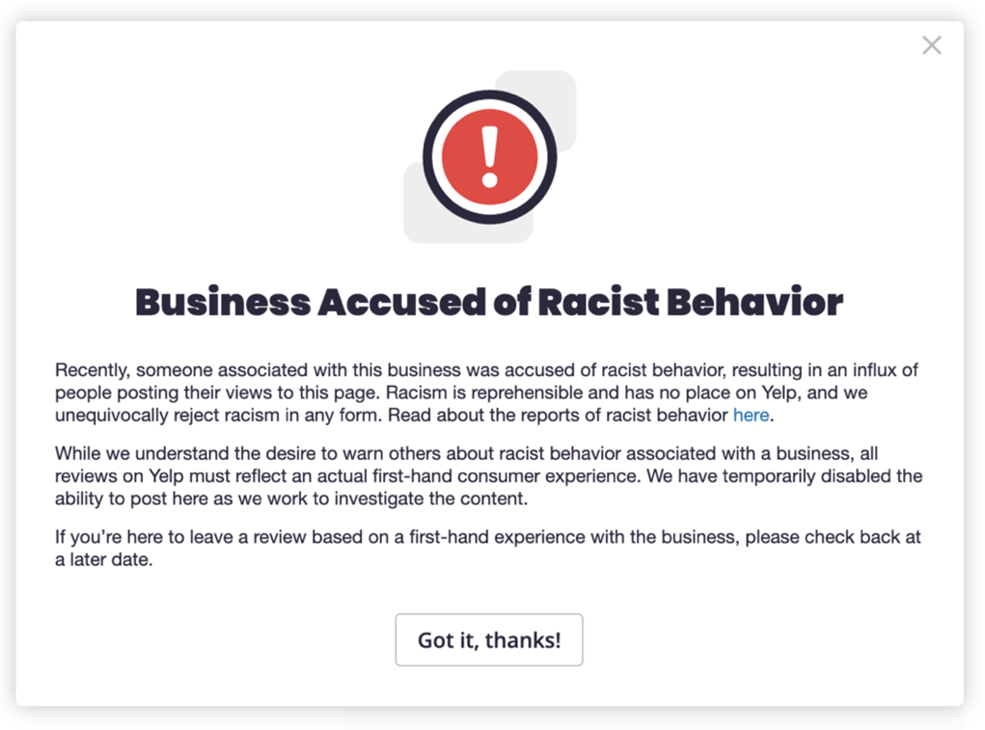 The notification is part of Yelp’s zero tolerance policy on racism as well as its efforts to support diversity, equity and inclusion—but the alert is also meant to cater to consumer needs.

We’ve seen that reviews mentioning Black-owned businesses were up more than 617% this summer compared to last summer. Support for women-owned businesses has also increased, with review mentions up 114% for the same time period.

… So far in 2020, we’ve seen a 133% increase in the number of media-fueled incidences on Yelp compared to the same time last year. Between May 26 and September 30, we placed more than 450 alerts on business pages that were either accused of, or the target of, racist behavior related to the Black Lives Matter movement. We have maintained around-the-clock support over the last few months to ensure that we’re maintaining the trust and safety of our users and business owners.

Why it’s important: Think about how your products and services can help support the cause of racial justice beyond your content strategy or communications efforts. Organizations that can point to concrete actions on the issue of race will be able to cultivate trust around a topic that has become more essential for many Americans.

Chicago-based pizza chain Lou Malnati’s Pizzeria had several choice words for the writers of Netflix’s “Emily in Paris” series after the show’s main character compared the restaurant’s deep-dish pizza to a “quiche made of cement.”

“We’ve been serving Chicago’s favorite deep dish since 1971. When Netflix’s ‘Emily in Paris’ writers chose to take a shot at Chicagoans and our pizza to try to get a laugh, it felt heartless and not humorous in the midst of Covid-19,” Marc Malnati said in a statement Lou Malnati’s representatives released Wednesday.

The statement also read: “Malnati’s is always the first to participate in good-natured banter with pizza lovers from New York or California. However, it feels especially unkind to disparage anyone during these difficult times, given that most restaurants are struggling to hang on.”

The pizza chain took advantage of the growing conversations by offering consumers a discount—and later moved to bury the hatchet by offering actress Lily Collins a pie:

To say “merci” for keeping us #ChicagoStrong we're giving you $5 off a Tastes of Chicago shipped 4 or 6 pizza pack! Place your order by Wednesday, October 14th and use code TCXCHISTRONG at checkout. P.S. #emilyinparis doesn’t get any. #shippizza #lous https://t.co/VPUL30SpBI pic.twitter.com/CcaINpf9V3

Thanks for the love, everyone! ❤️

We’ve simmered down some & we’re thinking this was all a big misunderstanding, right @lilycollins? We know you were just delivering your lines. Let’s call it a truce over some deep dish. Tell us where to send it! 🍕#emilyinparis #loumalnatis pic.twitter.com/uKBRyEyd4p

Porter Novelli’s “Executive Purpose Study: Leadership, Action & Accountability at the C-Suite” revealed that 76% of executives acknowledge the role organizations play in “perpetuating systemic racial inequality and are committing to action now more than ever.” Seventy-one percent believe that in order for an organization to be purpose-driven, it must “take risks that address social justice.”

Executives’ beliefs are aligning with the average U.S. consumers’ as well—a good sign, provided the 33% of executives that are nervous to discuss their past missteps or biases within their organizations don’t allow that fear to deter purpose-driven efforts. 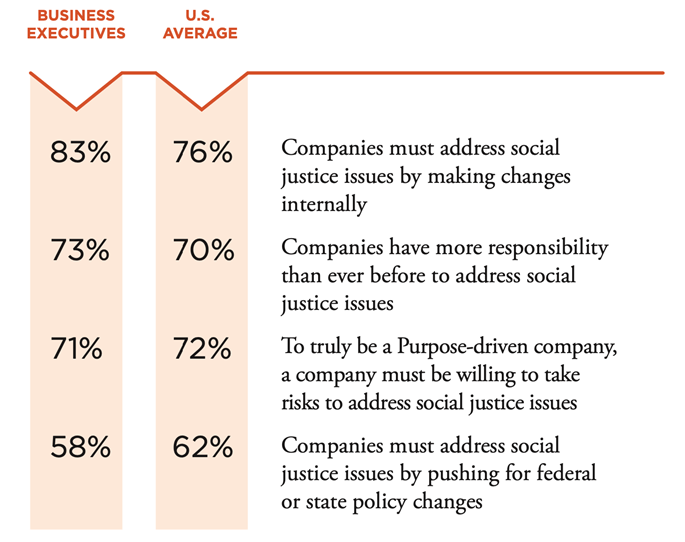 JPMorgan Chase to donate $30B to address racial wage gap

The bank’s contribution is the largest committed by an organization to fight systemic racism and inequality within the United States, and will be delivered over the next five years “to provide economic opportunity to underserved communities, especially the Black and Latinx communities.”

Systemic racism is a tragic part of America’s history. We can do more and do better to break down systems that have propagated racism and widespread economic inequality, especially for Black and Latinx people. It’s long past time that society addresses racial inequities in a more tangible, meaningful way.

Why it’s important: If you’re looking to make an impact with donations on the cause of racial equity, JPMorgan just set a high bar at $30 billion. Even if you don’t have vast resources to put behind your DEI commitments, don’t be afraid to put a concrete number on your promises. Only by setting measurable goals will you be able to build trust on this issue.

What if, instead of attending a lengthy video call, you could watch a quick update on your own time? 🎥 #SlackFrontiers pic.twitter.com/7mH5bJcaVC

What if you could recreate ad hoc office talk, right in your own Slack channels? 🎙 #SlackFrontiers pic.twitter.com/uTfxPA1qQg

Imagine the daily standup meeting that happens from 9 to 9:15 every morning. What if you could record your update at 8:53 a.m. and watch the others at 10:51 when it’s more convenient for you? This gives people the information and updates they need, with a measure of flexibility that is usually missing in today’s setup.

The announcement underlines the necessity of snackable video and visual content, to help quickly relay information and better connect to your audiences—both internal and external.

Many communicators are working longer hours as they handle crisis responses and change both campaigns and business models to adapt to changing consumer and employee behaviors. Especially when working from home, the transition between the “office” and after-work responsibilities can be difficult. Strengthen your wellbeing while you strategize.

These items can help:

We asked if you use a productivity or time-tracking app, and nearly 18% of you do, while 25% of you want to start. More than 39% block out time within calendars, but 18% of you said you’re fine without productivity apps and platforms:

Do use a productivity or time-tracking app as you work from home, PR pros?

How far into the future are you planning your campaigns and strategies?

How far into the future are you planning your campaigns and strategies?

Share with us your thoughts for planning and adjusting amid COVID-19 and other crisis below, and we'll share in Monday's #DailyScoop.

As with investing in technology, the benefit from a major company like Chase investing in a major PR project depends on not just HOW MUCH is invested but in WHAT.

The $30 billion to fight systemic racism can certainly make victims of racism very happy but most other people perhaps not as much. But if even $2 billion of the $30 billion is donated to St. Jude to fight children’s cancer, and another $6 billion to Memorial Sloan Kettering Cancer Center to fight prostate cancer in men, breast cancer in women, plus lymphoma which hits minorities especially hard, can we guess that over 100 million Americans would almost LOVE Chase for protecting our lives?

Can you imagine how many TV networks and stations would welcome Chase’s medical director, plus Sloan Kettering’s top lymphoma nurse practitioner, about coming research and how viewers can do a self-examination NOW in their own homes to gain early detection that could save thousands of lives? Also what people can do to AVOID cancer?

If you get 50 million Americans to feel their necks for a lump, and their family’s necks, can you imagine how many millions of Americans (including almost all legislators) would be deeply grateful to Chase?

There would still be $22 billion left to fight systemic racism, and you’re fighting lymphoma that kills a huge number of minority people. And would Chase’s anti-cancer generosity bring WORLDWIDE media and online coverage plus worldwide public gratitude?

Tens of millions worldwide might PRAY for Chase employees and for Chase-backed research to succeed!

Racial inequality is a huge problem humanity is facing and it needs to be dealt with iron hand.

People around the globe are facing Rasism now a days and it is a big threat to the humanity.