“The CCPA gives Californians the right ‘to say no to the sale of personal information,’ but the state government is evidently worried that these options will be buried under byzantine menus,” reports The Verge. “’By banning dark patterns, California will ‘ensure that consumers will not be confused or misled when seeking to exercise their data privacy rights,’ said the state’s Attorney General Xavier Becerra in a press statement.”

The CCPA, along with California’s newer Consumer Privacy Rights Act (CPRA), are largely considered to be bellwethers for what federal privacy regulations will eventually look like in practice. As privacy regulations become more widely enforced, communicators will be increasingly required to help marketing and advertising teams craft clear language for consumers that explains how their data is being used and how they can opt out of data collection in the first place.

Facebook announced Monday that it’s partnering with News Corp Australia, the Rupert Murdoch-owned media empire and parent company of Fox News, to have its content prominently featured on the social network’s Facebook News product. The announcement comes in the wake of a new Australian law requiring tech companies to pay for news content.

In a statement Monday, News Corp CEO Robert Thomson alluded to the firm’s longtime battle [for compensation from tech companies], arguing that “Rupert and [co-chairman] Lachlan Murdoch led a global debate while others in our industry were silent or supine.”

“This digital denouement has been more than a decade in the making,” he added. “The agreement with Facebook is a landmark in transforming the terms of trade for journalism, and will have a material and meaningful impact on our Australian news businesses.”

Yesterday, Facebook also unveiled that it will soon be testing paid partnerships with a small slate of writers and journalists for its upcoming publishing offering, which will be free to use. In addition to its newsletter function, the product will include tools to help journalists build their own websites.

In time, Facebook plans to build tools within the platform that allow writers to monetize their websites and newsletters with subscriptions, and possibly other forms of revenue down the line.

The platform is meant to help writers create an audience community that is loyal and engaged. Facebook will allow writers to create Groups for their products on the Facebook, and will provide writers with metrics about how content is performing.

Facebook adds itself to the growing trend of platforms and publishers like Forbes and Twitter that have launched newsletter creation products in the past year. By offering content to consumers through a subscription or membership model, newsletters have helped publishers offset drastic losses in advertising revenue caused by COVID-19, contributing to record subscription numbers for outlets including The New York Times and The Atlantic.

Communicators should take note that the future of storytelling remains creator-driven, not just when it comes to TikTok influencers and Twitch stars, but in the form of journalists who are able to succinctly synthesize news and complex issues of the day.

Furthermore, launching a brand and/or employee newsletter is a wonderful way to acquire customer data through a legitimate, first-party exchange. Because a customer subscribes to your newsletter by choice, it remains one of the cleanest methods for sharing company and industry news while adhering to privacy regulations.

At the [J.P. Mogan Industrial] conference and in securities filings, the nation’s four largest airlines—American Airlines, Delta, United and Southwest Airlines—expressed guarded confidence that their business was on the mend.

“The crisis isn’t over, of course, but we certainly are seeing the beginning of what feels like a very large uptick,” Doug Parker, the chief executive of American Airlines, said at the J.P. Morgan conference. The last three weeks have been the best of the pandemic for ticket sales, he said, with each week better than the last.

American and large rivals Delta Air Lines and United Airlines have mortgaged their frequent flyer programs to help cope with a plunge in revenue after the pandemic struck last year. In September, Delta raised a record $9 billion in debt backed by its SkyMiles loyalty program.

For communicators, the commercial airline industry’s cautious optimism serves as a lesson not to celebrate too soon when your company, or industry, seems to be emerging from a crisis. Set realistic expectations for the rebound by tempering your optimism with pragmatism, and acknowledge upfront the challenges that still lie ahead.

Twitter launched a ‘Brand Bracket’ this week, asking users to vote for the brand with the best Twitter account. The campaign, a nod to March Madness, is similar to Twitter’s Super Bowl-themed “Brand Bowl” campaign. 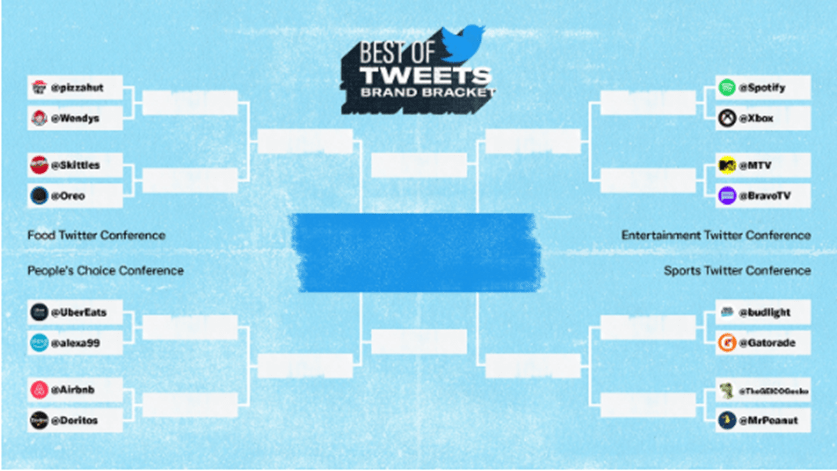 An epic battle to crown the best brand on Twitter.

The ultimate decision-maker? You.

Round 1 of the #BestOfTweets Brand Bracket tips off tomorrow. pic.twitter.com/zdLC1zcWPk

Social communicators can take a cue from the Brand Bracket by leveraging relationsihps with ‘frenemies’ in the same industry and starting social conversations between brands to increase engagement. Exploring creative partnerships with social platforms is a surefire way to boost your brand visibility, as well.

The Institute for Public Relations  has released a guide for communicators to go about research, analysis and evaluation.

The document offers a roadmap for approaching the research process that encourages communicators to first analyze the landscape and set objectives before developing a strategy. Once a strategy is in place, the guide encourages communicators to preset tactics before widely implementing them. Finally, the evaluation process should be undertaken while continuously refining the process based on what the research shows. 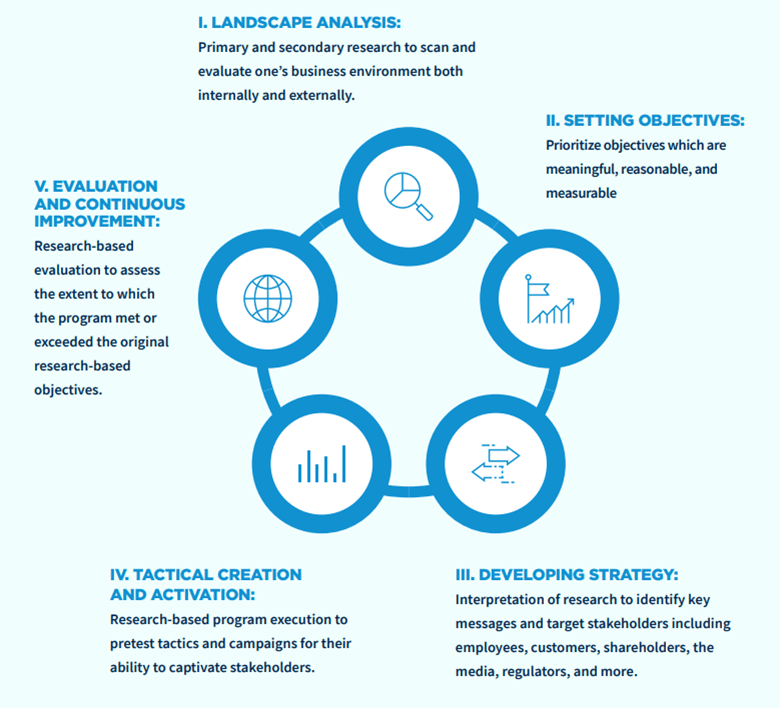 California has sued Brookdale Senior Living, a chain of nursing home facilities, claiming the company mainpulated Medicare’s widely-used star rating system. This is the first lawsuit to ever accuse nursing homes of committing fraud with the rating system, which many in the healthcare industry acknowledge is broken.

Heather Hunter, a spokeswoman for Brookdale, strongly denied on Monday that the company had “engaged in intentional or fraudulent conduct.”

“We are disappointed in the allegations against the skilled nursing industry,” Ms. Hunter said. “Publicizing unproven allegations is reckless and undermines the public’s confidence in a service necessary to the care of elderly individuals, especially during the Covid-19 pandemic.”

When pushed to issue a statement during a brand crisis, communicators should be careful with any attempt to capitalize on public sympathies tied to a national emergency at the risk of sounding opportunistic and insincere. 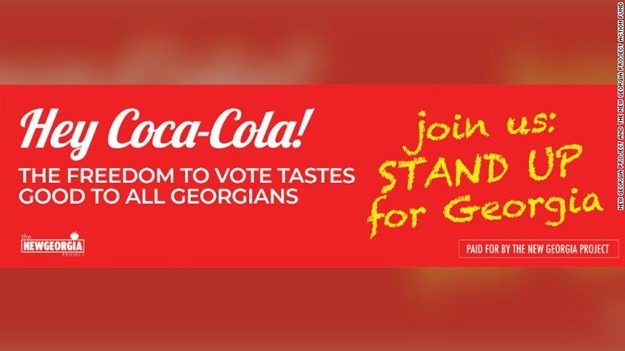 Led by the New Georgia Project nonprofit, the campaign called out the brands on a series of large billboards—and spokespeople from each of the companies were quick to respond.

“We’ll continue to work to ensure our associates, both in Georgia and across the country, have the information and resources to vote,”

“Voting is a foundational right in America, and we will continue to work to advance voting rights and access in Georgia and across the country. We support efforts by the   Metro Atlanta Chamber and the Georgia Chamber of Commerce to help facilitate a balanced approach to the elections bills that have been introduced in the Georgia      Legislature this session. The ultimate goal should be fair, secure elections where access to voting is broad-based and inclusive.”

“We continue to engage with Georgia’s elected leaders on this issue. Delta’s shared values call on us to make our voices heard and be engaged members of our    communities, of which voting is a vital part of that responsibility. Ensuring an election system that promotes broad voter participation, equal access to the polls, and fair,   secure elections processes are critical to voter confidence and creates an environment that ensures everyone’s vote is counted.”

Brands don’t have the luxury of waiting to respond when they are called out in a public forum. This incident reminds communicators that you should prepared to respond quickly to any crises that not only affect your brand or industry, but your home state and community as well.

In today’s purpose-driven corporate climate, brands are not only expected to take a stand, but to champion the prevailing crises and issues that plague their home turf. Come up with a crisis plan that clearly identifies what those issues are, and what your front-facing stance is on those issues in relation to your organization’s values.

We asked you about your preferred method for sharing large files with colleagues and partners. Sixty-five percent of you prefer Google Drive, while 17% of you find it better to use an internal server or VPN. A little more than 11% of you prefer Dropbox, while a miniscule 6% share files over real-time communication apps like Slack or Teams.

One Response to “Facebook to pay NewsCorp for content in Australia, brands pushed to speak up on voting rights in Georgia, and airlines share cautious optimism on surging ticket sales”

Major companies respond when asked but the Georgia question may interest politicians a LOT more than voters. What nearly all people care about most regarding public policy questions is “what do WE stand to get or lose?”

Anytime we in PR want management to take a position and spend serious money, we should be ready to show management clearly: “Here’s what in this for us.” If the truth is “not much,” management’s question may be “who hired this person and why?”