Taco Bell will partner with Grammy-winning recording artist Lil Nas X, giving him the honorary role of “Chief Impact Officer,” which the fast food chain says in a press release will let him “collaborate on the brand experience from the inside out.”

“Back in 2017, Lil Nas X laid down roots working at an Atlanta-area Taco Bell as a team member. Less than five years later, he has ascended to stardom by defying conventions, charting his own course and remaining authentically true to himself—all things that Taco Bell stands for in its own way,” the press release continues. “Over the next several months, Taco Bell will ‘Live Nas,’as Lil Nas lives Más.”

As part of the partnership, Lil Nas X will announce new menu items for Taco Bell and share more about his time working there in the weeks leading up to the release of his debut album “Montero.” 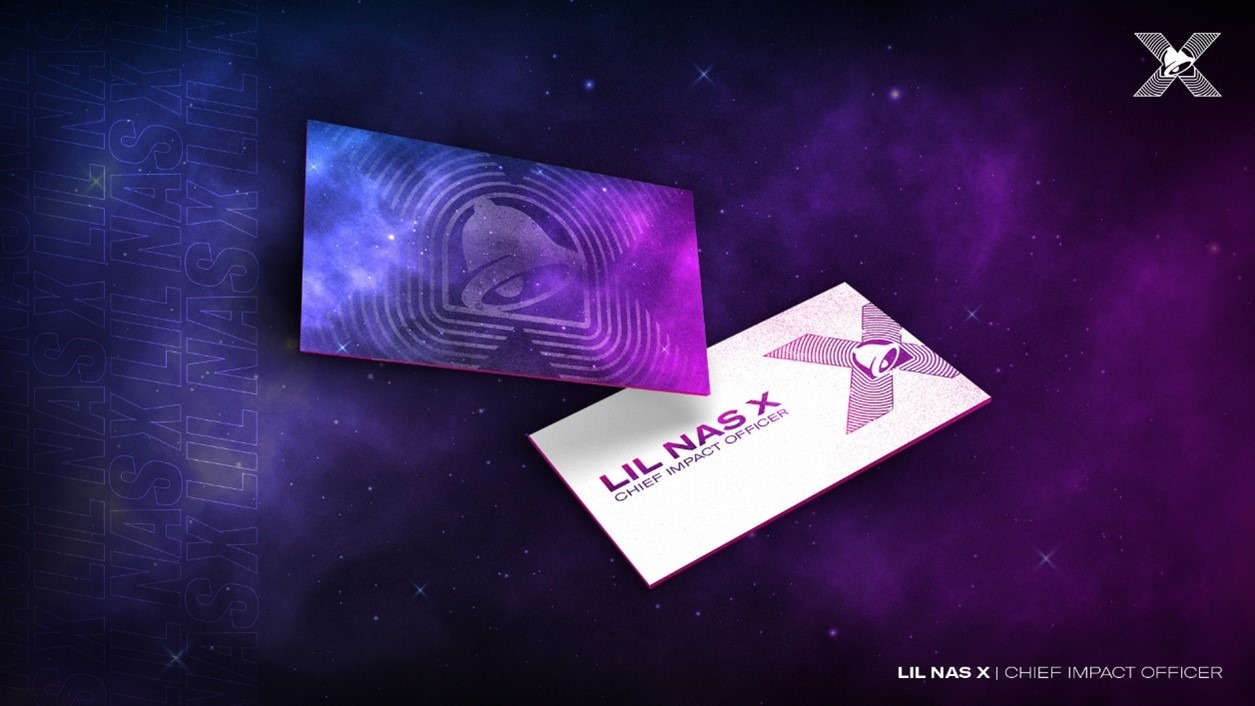 “Lil Nas X is one of the most important voices of this generation,” said Jennifer Frommer, senior vice president of brand partnerships at Columbia Records. “His expertise in understanding social media and youth culture alongside his skills in creating great music makes this partnership with Taco Bell exciting, brave and one of the most innovative campaigns I’ve had the pleasure of creating.”

This partnership emphasizes the benefits of working with an influencer who understands your brand, along an independent mastery of social media best practices, to fold them into your brand’s story in an organic and authentic way.

The Food and Drug Administration [FDA] has announced its full approval of the Pfizer-BioNTech COVID-19 vaccine which can now be marketed under the name Comirnaty. The vaccine is currently authorized for use by people aged 16 years and older, and available for emergency use by those aged 12-15 years.

“Our scientific and medical experts conducted an incredibly thorough and thoughtful evaluation of this vaccine. We evaluated scientific data and information included in hundreds of thousands of pages, conducted our own analyses of Comirnaty’s safety and effectiveness, and performed a detailed assessment of the manufacturing processes, including inspections of the manufacturing facilities,” said Peter Marks, M.D., Ph.D., director of FDA’s Center for Biologics Evaluation and Research. “We have not lost sight that the COVID-19 public health crisis continues in the U.S. and that the public is counting on safe and effective vaccines. The public and medical community can be confident that although we approved this vaccine expeditiously, it was fully in keeping with our existing high standards for vaccines in the U.S.”

Pfizer explained the authorization and approval process on Twitter:

BREAKING: Today our #COVID19 vaccine with @BioNTech_Group was granted full approval by @US_FDA for those 16+. pic.twitter.com/0xhH7YNWjq

We will continue to work with the U.S. government to distribute the vaccine across the country and help protect more people from this virus.

As the FDA goes down the list of the steps it took leading up to approval, its statement artfully addresses past gaffes in the vaccine rollout process (such as inspections of manufacturing facilities) and explicitly mentions its intentions to inspire confidence in those still on the fence about vaccine efficacy.

Pfizer, meanwhile, illustrates several social media best practices including a tweet with a photo and quote from CEO Albert Bourla, an explanation of the steps it took in the approval process using data and a shortened link to a landing page with additional resources.

Each of these statements exemplifies how you can address concerns, doubts and misinformation about your brand or organization by offering specific rebuttals without explicitly mentioning the negative sentiment.

A new infographic from Semrush highlights several writing tips that align with SEO best practices and will allow your content to rank higher in search results, including using important keywords, keeping tone and voice consistent with audience preferences, constructing actionable headlines that focus on benefits and more.

These tips illustrate how closely best SEO practices are simply an extension of best writing practices.

TikTok has announced plans to start a $150,000 fund focused on assisting small Latinx businesses across the U.S. as part of a partnership with the Hispanic Heritage Foundation [HHF].

#CreciendoconTikTok builds on our partnership with HHF, initially announced last year, to support the long-term success of the Hispanic community. The fund will grant individual cash awards of $5,000 to select Latinx small business owners who have championed perseverance, hard work and entrepreneurship through TikTok during the COVID crisis.

TikTok is proud to be a place where Latinx business owners can share their stories, build an audience and celebrate culture and community. We continue to find inspiration in the stories of small business owners across the U.S., and we’re dedicating resources to support them in every way we can.

By providing more background on its previous partnership with HHF and linking back to past initiatives, TikTok’s statement illuminates the social media platform’s longer philanthropic goals beyond a one-off publicity stunt.

Remote, in-person, or a mix of the two, office culture is under constant strain in these uncertain times.

As many companies shift their office reopening strategies to accommodate the ever-changing needs and concerns of a post-pandemic workforce, it’s on communicators to ensure employees remain engaged in corporate culture.

Tune in on Aug. 25 for our webinar, “Communicating Your Return-to-Workplace Plan to a Distributed Workforce.” Top takeaways from the afternoon will include:

Plus, panelists will tackle the “Great Resignation” with potent tips and tools to retain your best workers and help employees feel like they belong.

New York City Mayor Bill de Blasio explained his mixed messaging to the crowd at this past weekend’s free homecoming concert in central park, which was shut down due to the incoming weather caused by tropical storm Henri. After signs told concertgoers to calmy but quickly seek shelter, de Blasio told attendees that the concert would resume shortly before it was canceled altogether, causing mass confusion.

Here, almost in full. “We want to bring the concert back,” de Blasio says. “Move to somewhere indoors briefly nearby. We’re going to get you an update shortly.” pic.twitter.com/lXuyVP5GgI

Mayor Bill de Blasio reflected on the show during his press conference on Monday morning, saying it was “profoundly sad” to see the concert grind to a halt just like that. “It was really sad to see such an amazing, amazing moment cut short,” he said. “It was almost literally the exact halfway mark when the rain came. This is the definition of glass half full, glass half empty. It was really sad to see that show have to end, profoundly sad, because it was getting stronger and stronger.”

He also addressed criticisms over his actions when the Great Lawn was being evacuated, and he got on stage and told people the show would resume eventually, despite announcements declaring the show was definitively over; it was a move some critics called “an incredibly boneheaded, impossibly naïve performance” from the mayor.

When questioned about this moment during Monday’s press briefing, de Blasio said, “My thinking was the same as everyone involved in the show, [organizers] Clive Davis and Doug Davis and performers—everyone wanted the show to go on. The initial information we got from our emergency management department and from the weather analysts was there was gonna be an end to the thunderstorms. A summer thunderstorm is a pretty common thing, and a lot of times is brief. We understood they would pass and then we’d have good long stretch where things would be clear, and we were hoping to be able to bring the show back in that instance.”

Mayor de Blasio’s fumble highlights a failure to consult expert advice and raises questions about why the concert proceeded in the first place when elsewhere de Blasio urged residents to stay indoors during the storm. This incident serves as a reminder that during a crisis, you must ensure that your leaders and executives are briefed on the most up-to-date information before addressing audiences and stakeholders.

Mike Richards steps down as ‘Jeopardy!’ host amid scandal

“Jeopardy!” executive producer Mike Richards announced that he will no longer assume the role of host after old podcast episodes surfaced that featured Richards making sexist and antisemitic comments. Mayim Bialik will now be the temporary host as the search for a full-time replacement host resumes.

Richards will retain his role as executive producer.

In an email to staff obtained by CBS News, Richards said it “pains” him “that these past incidents and comments have cast such a shadow on Jeopardy! as we look to start a new chapter.

In his memo to the staff on Friday, Richards said he was “deeply honored” to host the show, but “over the last several days it has become clear that moving forward as host would be too much of a distraction for our fans and not the right move for the show.”

“As such, I will be stepping down as host effective immediately. As a result, we will be canceling production today,” he said, adding that Sony Pictures, which currently produces “Jeopardy!” will resume its search for a permanent syndicated host.

“I want to apologize to each of you for the unwanted negative attention that has come to Jeopardy! over the last few weeks and for the confusion and delays this is now causing,” Richards said in the memo. “I know I have a lot of work to do to regain your trust and confidence.”

While Richards’ memo serves as the latest example of internal communications finding an external audience, his words to fellow employees and staff on the show highlight a mindfulness that his actions have reputational consequences for the show that are larger than any damage done to his own career.

The fact that Richards is still working as the show’s executive producer even after this mea culpa, however, raises questions about whether there has been a full reckoning about the implications of the crisis for the show. Also absent is any specifics about what reputational repair, listening and learning Richards will do to heal the damage.

Years ago I wrote for Pfizer a feature headed “Modern Medicines—Which Are Witch?” The gist was that scientists today are looking at which medical ingredients of long ago may protect us even more than some modern ingredients.

The way to sell modern vaccines may be to not just say they are safe but that they protect us against what is UNSAFE—viruses that have recently caused DEATH of over 600,000 Americans.

Try to argue what the other side can’t refute, like the reality that death is final and most people who die of Covid did NOT have the vaccines. Present the choice as which is better—to (a) take a chance on death from Covid which has killed over 600,000 Americans, or (b) take a chance that the vaccine which hundreds of millions have had won’t work.

When government says what the public “must” do, let’s tell the truth. It’s that there’s no “must” about taking the vaccine but people who DON’T take it and add to the 600,000 Covid deaths “must” be buried or cremated because that’s the law.