Cuisine Aunt Dai, a Chinese restaurant in Montreal, is grabbing both headlines and kudos for the honesty that its owner, Feigang Fei, includes in his menu. 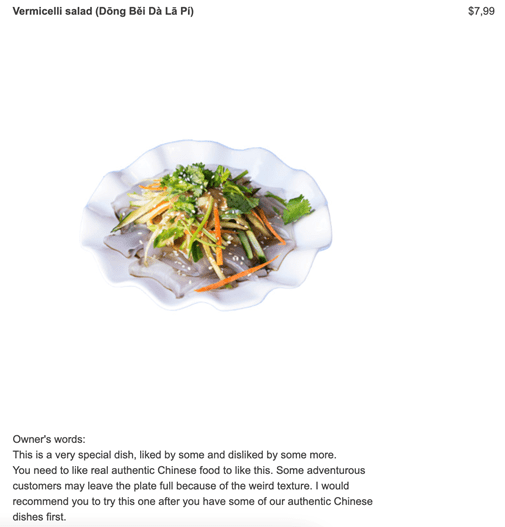 After the menu was shared on Twitter rand buzz grew, Fei posed with his menu and decribed his TV interview as “amazing” and “dream-like”:

The effort underlines the power of honest reviews and communications.

The company issued a mea culpa after it fired a Jewish employee on Jan. 8 for describing those involved in the recent U.S. Capitol riots as “Nazis” on an internal Slack channel. On Jan. 6, the employee warned his co-workers to “stay safe homies, Nazis are about,” which a colleague criticized for “untasteful conduct.”

After backlash over the decision, GitHub conducted an investigation and reported “significant errors of judgment and procedure,” with its head of HR resigning on Jan. 16. GitHub offered the employee his job back and shared several statements with members of the press, including the following:

GitHub condemns the attack on the US Capitol on January 6th and any and all belief systems that are discriminatory. Antisemitism, neo-Nazis, and white supremacy—along with all other forms of racism—are vile and have no place in our community.

… Employees are free to express concerns about Nazis, antisemitism, white supremacy or any other form of discrimination or harassment in internal discussions. We expect all employees to be respectful, professional, and follow GitHub policies on discrimination and harassment.

Why it’s important: Make sure you’re regularly communicating with both your leaders and employees about your organization’s values, as well as your policies and procedures. It’s especially important to revisit these rules and guidelines during times of political and social unrest, to not only avoid issues such as wrongful termination, but also to better protect your organization’s reputation and image.

Oscar Mayer is searching for its next Wienermobile spokesperson in a job listing that’s grabbed headlines across news media outlets:

Kraft Heinz, the brand’s parent company, said in its listing that the company’s vision is “to sustainably grow by delighting more consumers globally,” so interested applicants should be ready to explain how they can help “make life delicious” as a member of the team through “Meats and greets” in the Wienermobile, journalist interviews, marketing campaigns and social media strategies.

The right applicant will “execute over 200 events during your one-year tour” and manage “their own traveling public relations firm on wheels,” so prepare to flex your muscles with pitching, PR and marketing stunts, events, promotional campaigns and social media content that grabs engagement.

You can apply for the position here.

Search engine DuckDuckGo, which is focused on user privacy, increased its daily search numbers by 62% last year, and on Jan. 11 it reported its highest number of search queries in a single day (more than 102 million). 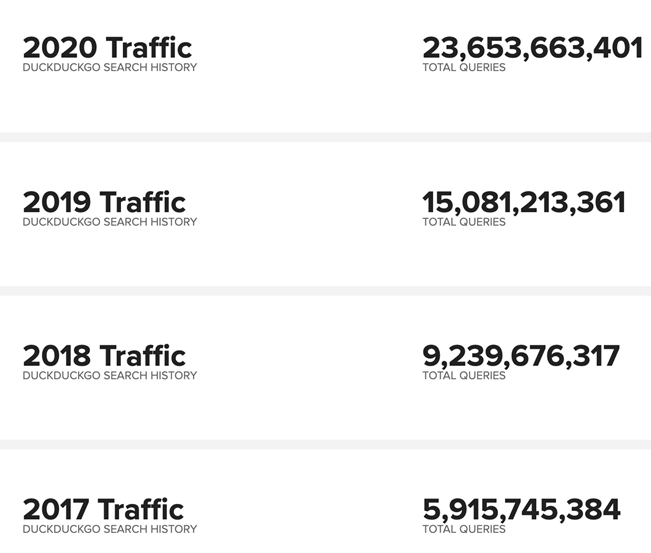 The Google competitor has been growing in popularity over the years as consumers’ concerns over data collection grow: 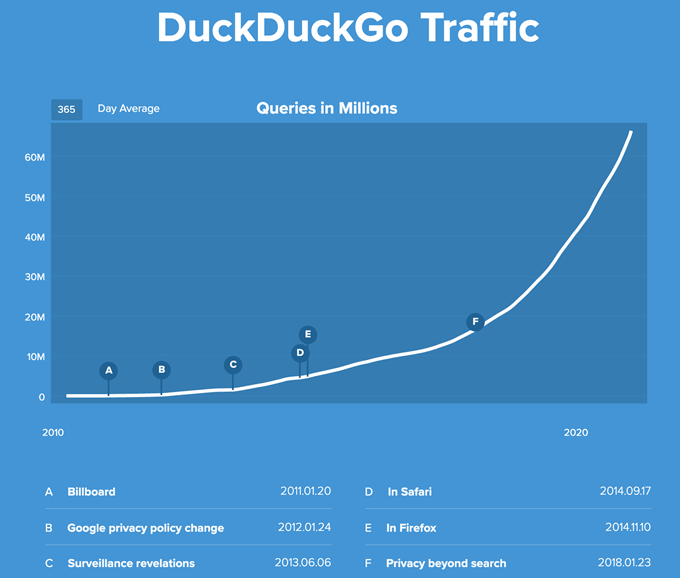 PR and marketing pros should consider how privacy-focused search engines and apps, such as Signal and Telegraph, can affect their campaigns—especially with decreased access to users’ activity data.

Ford is focusing on messages of unity across social media and will participate in Tuesday night’s nationwide memorial to honor those who lost their lives to COVID-19.

As long as there are builders in this country, this country has a future. #BuiltForAmerica pic.twitter.com/UCCIrssyM7

In a press release, Ford wrote:

For one hour starting at 5:30 p.m. Tuesday, Ford will illuminate its world headquarters here and the historic Michigan Central Station that the company is restoring in Detroit’s Corktown neighborhood – simultaneous with building lightings and church bells pealing all over the country.

The memorial was planned by the 2021 Presidential Inaugural Committee and will feature a lighting around the Lincoln Memorial Reflecting Pool in Washington, D.C., to mark the day of remembrance and unity.

Messages calling for togetherness and unity can be a less risky choice for organizations looking to engage through community efforts or social media this week, but brand managers should still evaluate potential pitfalls, including consumers criticizing earlier decisions and actions.

On Monday, social media users quickly called out the Disney-owned “Star Wars” Twitter account for sharing a message honoring Martin Luther King Jr., criticizing the brand for its responses to previous harassment that actress Kelly Marie Tran endured, along with its alleged treatment of John Boyega. Both performers starred in the most recent Star Warsn films.

The influencer campaigns are a new strategy for the hospital network and are aimed at increasing awareness for younger New Yorkers.

“As the media landscape shifts, Health+Hospitals wanted to supplement traditional advertising with new channels, especially for audiences that are more difficult to reach,” says Wallace. “Young adults, who at times during the pandemic have been less diligent about COVID safety behaviors and testing, needed to hear from trusted messengers they follow actively.”

The Indonesian government is also leaning into the power of influencers for COVID-19 awareness campaigns, especially considering its nation is one of the top global users of Facebook, Instagram and Twitter. Indonesian TV personality Raffi Ahmad recently received the country’s first COVID-19 vaccine:

A post shared by Raffi Ahmad and Nagita Slavina (@raffinagita1717)

Senior health ministry official Siti Nadia Tarmiz, said the decision to include influencers alongside almost 1.5 million healthcare workers in the first round of inoculations was a deliberate government communications strategy.

Although Indonesia faces the most severe coronavirus outbreak in Southeast Asia – with more than 869,000 cases and 25,000 deaths–there has been scepticism around the safety and efficacy of any vaccine, and in the world’s biggest Muslim-majority nation, whether it is halal, or allowed under Islam.

Meanwhile, the state of Washington announced that its joining forces with Microsoft, Starbucks and other organizations to execute its “Vaccine Command and Coordination Center.”

Kaiser Permanente, for example, will be responsible for helping plan for mass vaccination clinics, while Starbucks will help with operational efficiency.

“Now, we are not a health care company,” Starbucks President and CEO Kevin Johnson said during the news conference. “But Starbucks does operate 33,000 stores at scale, serving 100 million customers a week and we have a world class team of human-centered design engineers who are working under the direction of the state and health care providers … to help support the creation of vaccination centers that can scale and … amplify the comfort, care and safety of every person who gets vaccinated.”

Why it matters: Communicators involved with COVID-19 efforts, including vaccination and testing services, must not only persuade people to act on its messages, but also fight against misinformation and decreased trust toward organizations, including government entitites. Influencers can be an effective way to both raise awareness and connect with people in ways they understand and trust.

Whether you’re partnering with an organization or content creator, lay out the conditions of your partnership ahead of time and do your research to avoid potential blowouts from a person or channel not aligned with your organization’s values.

The National Rifle Association has filed for bankruptcy, announcing in a recent press release that it’s planning to restructure as a nonprofit organization based in Texas.

The organization was established in 1871 in New York, with its current headquarters located in Fairfax, Virginia.  Leaving New York was the main focus of the NRA’s press release, which also declared it was in its “strongest financial condition in years,” despite applying for Chapter 11 bankruptcy protection.

The move will enable long-term, sustainable growth and ensure the NRA’s continued success as the nation’s leading advocate for constitutional freedom—free from the toxic political environment of New York.

… “This strategic plan represents a pathway to opportunity, growth and progress,” says NRA CEO & EVP Wayne LaPierre. “Obviously, an important part of this plan is ‘dumping New York.’ The NRA is pursuing reincorporating in a state that values the contributions of the NRA, celebrates our law-abiding members, and will join us as a partner in upholding constitutional freedom. This is a transformational moment in the history of the NRA.”

“The Chapter 11 announcement follows leadership shakeups and allegations of financial mismanagement at the NRA in recent years,” CNN reported.

The start of a new year brings more opportunities for communicators across roles, organizations and industries to develop effective strategies and efforts that can strengthen their brands amid continuing crises, including the COVID-19 pandemic.

Ragan’s Communications Leadership Council has created The 2021 Communications Benchmark Survey, and wants to know your challenges, successes and needs as you navigate the rapidly shifting communications landscape and respond to unprecedented crises as well as new opportunities.

Please share your insights with us. As a thank you for your time and insights, you’ll receive an Executive Summary of the report, packed with proprietary research that can help you better shape communications strategies in 2021. You’ll also be entered to win one of five $100 Visa gift cards.

How are you altering your pitching strategies to land coverage, PR pros?

How are you altering your pitching strategies to land coverage, PR pros?

Share with us below and we'll dish the results in tomorrow's #DailyScoop.

Please weigh in below and on Twitter, and we’ll share in tomorrow’s #DailyScoop. Have a question you’d like to see asked? Please let us know under the hashtag!