Efforts to convince consumers to get vaccinated against COVID-19 continue and some businesses are requiring proof of vaccination to use their services or attend their events.

The first full-capacity concert in New York City will feature the Foo Fighters at Madison Square Garden—but only vaccinated fans will be allowed to attend. NBA fans have attended basketball games in stadiums with vaccinated sections to allow denser seating arrangements in the ongoing playoffs.

The travel industry is also taking vaccination seriously. United Airlines is the latest to announce it will only hire vaccinated employees.

“As we welcome new employees to the company, it’s important we instill in them United’s strong commitment to safety,” the carrier stated in a memo to employees. “Effective for all job offers made after June 15, 2021, we will require any external candidates for U.S.-based jobs to attest that they have been fully vaccinated against COVID-19 by their start date.”

Whatever your message on vaccination, make sure to place the safety of employees and customers at the center of your approach and clearly communicate how your decisions are being made.

The oil industry is facing real change as recent events, such as activist investor activity winning seats on the Exxon board and the European government requiring Shell to accelerate changes to fossil fuel business operations.

American companies are hoping that technology like carbon capture will preserve their business model while helping them achieve climate goals, NPR reports. However, investments in clean energy are still miniscule compared with their overall footprint.

As companies look to show authentic action on environmental, social and governance issues (ESG) to preserve brand reputation and offer value to customers, a poor record on climate will be hard to overcome. The oil industry will be a bellwether for just how effective PR campaigns will be at remaking brands that have been slow to respond to climate science.

What’s more, look for activists to take a close look at PR agencies who do work for the fossil fuel industry. Agencies that make pledges to reduce carbon emissions, but still do work for oil industry organizations, will risk their reputation and invite closer scrutiny.

The gap between unvaccinated and vaccinated Americans on their comfort in participating in pre-pandemic activities has narrowed. Overall comfort for all Americans is up as COVID-19 cases have fallen dramatically and vaccination rates continue to climb. 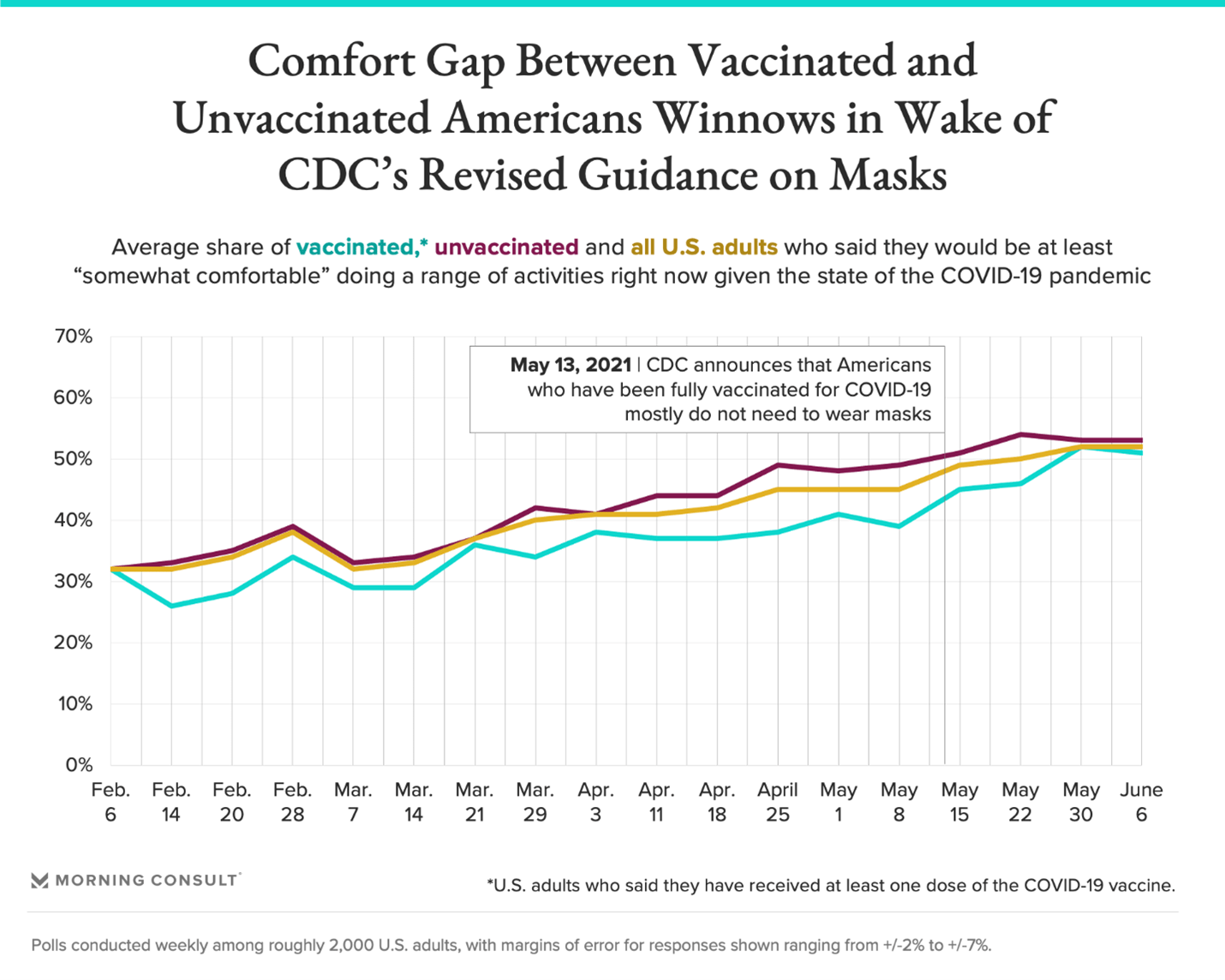 The closing gap shows that there is less and less of a need for communicators to separate audiences with targeted post-COVID messages. However, there are still some differences in vaccinated and unvaccinated audiences and businesses that can offer personalized outreach will be a step ahead of those who fail to account for a diverse audience.

See all the data from Morning Consult here.

Efforts to reduce reliance on single-plastics and containers was abandoned by many organizations during the pandemic. Grocery shoppers once again hauled their produce in plastic bags and Starbucks halted programs where customers could bring in reusable cups to cut down on consumer waste—all in the name of sanitation and virus prevention.

Now the coffee company is bringing the program back.

It’s the latest signal from restaurants and retailers that business is returning to normal in the U.S. as states relax restrictions. Last month, Starbucks and many other businesses stopped requiring fully vaccinated customers to wear masks in stores. Costco is starting to bring back in-store samples, while Target has reopened its fitting rooms.

What you should know:

Now that pandemic safety measures are being rolled back, it’s important that communicators help share why these decisions are being made. Offer transparency about the risks being weighed and highlight the relevant public health guidance that supports your claims.

Some consumers won’t be ready to ditch their pandemic habits, so make sure to offer as much empathy and support that you can as you coax shoppers back to the marketplace.

The White House press corps was delayed on the tarmac for their flight to the G7 summit in Europe by mechanical issues caused by cicadas, the insects that have swarmed the East Coast as part of their seven-year hatching cycle. True to form, the bored and captive press on the plane took to social media to relay their experience:

Because, what else was I going to do while I wait? (Also, editors in New York kind of insisted that I write something.) https://t.co/leHCqtMGex

The episode is a reminder of how the modern press will tell whatever story it is presented—and PR pros must prepare for the apocalyptic swarm of locusts that just might supersede your desired narrative about global economic cooperation.

Reporters are people too, and while if might be against the rules to offer them outright bribes, making sure their creature comforts are taken care of on press trips is part of the job.

Fastly has published its review of the outage that created widespread internet errors yesterday morning. The outage caused errors for websites like Amazon, Reddit, Spotify, Ebay and Pinterest, making it one of the more remarkable outages of the past several years.

Everywhere you looked, there were 503 errors and people complaining they couldn’t access key services and news outlets. It all demonstrated just how much of the internet relies on this largely unheard-of cloud computing service.

In a blog post, Fastly, the cloud service provider responsible for the outage, explained what went wrong:

We experienced a global outage due to an undiscovered software bug that surfaced on June 8 when it was triggered by a valid customer configuration change. We detected the disruption within one minute, then identified and isolated the cause, and disabled the configuration. Within 49 minutes, 95% of our network was operating as normal.

The effort is an example of how to follow up with your audience after completing your investigation into the cause of a crisis scenario. Transparency and education are essential parts of a crisis response and if you promise to come back with more information at a later date, make sure you follow through—even if the news cycle has moved on.

Ev Williams, top leader at blogging platform Medium, wrote a memo to employees in April that tried to address culture issues that had arisen during a year of crises and social/political upheaval.

“A healthy culture brings out the best in people,” he wrote. “They feel psychologically safe voicing their ideas and engaging in debate to find the best answer to any question — knowing that their coworkers are assuming good intent and giving them the benefit of the doubt because they give that in return.”

A few paragraphs later, Williams wrote that while counterperspectives and unpopular opinions are “always encouraged” to help make decisions, “repeated interactions that are nonconstructive, cast doubt, assume bad intent, make unsubstantiated accusations, or otherwise do not contribute to a positive environment have a massive negative impact on the team and working environment.”

The letter is part of a trend in tech where leaders have tried to reset boundaries around political speech, conversations about race and inequality and other topics that have bubbled to the surface during the extraordinary events of 2020. Basecamp’s leaders received blowback for how they handled employee criticism about racism and insensitivity in the workplace. Coinbase tried to tamp down on political discussions at work, which led to many employees leaving the company.

Medium’s note came after a failed unionization drive at the company and an announced editorial shift from in-house content to user-generated work.

What you should know:

Leaders that frame the remarkable discussions in 2020 that rocked the business world as “political” miss the bigger trend in how employee experience is generating real value for many organizations in a post-COVD marketplace. Workers who don’t see their company stand up for what they believe in, particularly on racial equality and social justice, will likely look elsewhere for opportunities. In a marketplace where workers have an upper hand and organizations are looking to increase salaries and benefits to try and attract talent, misguided memos about organizational culture will likely do more harm than good.

What’s the danger of mixing a metaphor, you might ask? It’s a harmless mistake, and understandable when speaking off the cuff. Yet, White House Press Secretary Jen Psaki has found the grammar police in the form of CNN’s Jake Tapper:

Are they making the sausage ON the train? https://t.co/iqC9w2mJtT

The reference to making sausage on a train also brought up unpalatable images from the hit dystopian film “Snowpiercer” about an endlessly circling train where passengers are turned into sausage to feed other passengers.

Probably not the visual Psaki was hoping for, and a reminder to professional communicators that those pesky language rules learned in grade school still matter—at least for the Twitterati.

What are some language mistakes that you can’t stand, PR Daily readers? Share some of your pet peeves with our hashtag #DailyScoop.

What are some of your style and grammar pet peeves? Share the mistakes that make your blood boil and we will share the best ones in tomorrow’s #DailyScoop ! pic.twitter.com/6rTyzekQ1x

One Response to “Oil industry looks to change its image, comfort levels between vaccinated and unvaccinated narrows, and Medium’s CEO letter backfires”

The fascinating challenge of Exxon and other companies that earn billions is to help the public see the fallacy in “tax the rich” proposals.

At first it could seem like free money for the public. It sounds so true that no company needs “all those billions” earned by successful companies in oil, healthcare, chemicals and technology. And “hard working American families” may seem to need the money more.

But the reality PR can spotlight is that oil, machinery and buildings have no money so a “”tax on business” is actually a tax on PEOPLE.

A company pays four main groups of people: (1) employees; (2) suppliers; (3) stockholders; and (4) tax collectors. If a company has to pay another billion to tax collectors, the company must pay a billion less to the other three.

People the stockholders would pay with that billion–store employees, factory workers, office workers and others–will get billion less from the stockholders so these people will also pay less income tax. If you’re poor or middle class, you’re not eager than your wealthier employer should have more taxes and less money. You might have more chance of getting money from your employer than from the government.

Since Exxon has to compete worldwide with oi companies from England, France, Italy, Russia and elsewhere, Exxon may feel pushed to save some of the billion on employment costs by using more foreign labor for tanker crews, refinery workers and office workers. People of any country can do inputting. So fewer American jobs could men still another reduction for American tax collectors.

Truth: All Americans are in our economy together. A tax on American business is a tax on American people. Just as a fire in one house can spread to others, an additional tax on Exxon can affect people we care about very much.

Two writers for Omnicom, and I’m in awe of that brilliant PR team, recently pointed out in PR Daily that the core of successful PR is not slogans but is the TRUTH. Since the truth is that tax on business is a tax on people, the PR challenge and other big guys is to make this truth known. And soon enough so that PR helps avert a multibillion dollar tax hit that could hurt our whole economy.

Our country, like a family, sometimes has to spend less rather than saying some members of the family or some taxpayers have to chip in more. No family or country can just buy whatever someone wants.

Big companies do Americans a lot of good and we should gladly strengthen them, not weaken American companies or American allies.