This Cyber Monday, Goodwill is launching a refreshed online nonprofit auction site, ShopGoodwill.com, with new product categories and an upcoming mobile app. Goodwill claims that the site has raised approximately $1.7 billion in total sales, which allow the nonprofit to focus on its mission of training people for jobs and career advancement that has employed more than 44,000 people.

“The pandemic has changed online shopping behavior forever,” added Shopgoodwill.com senior technology services director Ryan Smith. “Our site is an ideal way to meet the growing needs and demands of online shoppers through its convenience, ease of use and unique variety of items for sale and auction. And the best part is that revenue generated from sales helps drive training and employment opportunities in local communities. It’s the perfect Cyber Monday destination.”

By timing the refresh of its website to coincide with a popular shopping holiday, Goodwill demonstrates how your brand can piggyback on a holiday with its own purpose and values. Goodwill’s announcement also emphasizes how your brand can use proprietary data to contextualize its mission, and define its purpose.

On Monday, the World Health Organization (WHO) issued a warning about a new COVID-19 variant known as Omicron that is rapidly spreading through South Africa and other parts of the world. Days earlier, vaccine manufacturers including BioNTech/Pfizer, Moderna and Johnson & Johnson announced that they were moving swiftly to research the effectiveness of current vaccines against the new strain.

BioNTech and Pfizer say that the companies will know in two weeks whether its current vaccine will prove effective against Omicron and will tweak the vaccine accordingly. Moderna says it is currently testing three existing COVID-19 vaccine booster candidates against the variant and will develop a new booster depending on which is most effective. Johnson & Johnson confirmed that it also testing the effectiveness of its vaccines to assess whether updates are needed. AstraZeneca says it is conducting research in Botswana and Eswatini, where the variant was first identified, to collect real-world data on its vaccine’s strength against the variant.

“Pfizer and BioNTech have taken actions months ago to be able to adapt the mRNA vaccine within six weeks and ship initial batches within 100 days in the event of an escape variant,” [BioNTech] said in a statement. “Pfizer and BioNTech … have begun clinical trials with variant-specific vaccines (Alpha and Delta) to collect safety and tolerability data that can be provided to regulators as part of the blueprint studies in the event of a needed variant-specific vaccine,” the companies said in a statement.

“From the beginning, we have said that as we seek to defeat the pandemic, it is imperative that we are proactive as the virus evolves. The mutations in the Omicron variant are concerning and for several days, we have been moving as fast as possible to execute our strategy to address this variant,” said Stéphane Bancel, Moderna’s chief executive.

In reading each vaccine manufacturer’s response side-by-side, you can see a more coordinated messaging strategy than the fractured communication around initial distribution plans over the past year. This new messaging includes more specific commitments—such as BioNTech/Pfizer’s timeline to know next steps and AstraZeneca’s focus on researching in South Africa—which live up to the “proactive, not reactive” goal of crisis communications. Emphasizing your past wins quickly while focusing on how they inform present uncertainties allows you to root a holding statement in the present moment while sharing how your organization is staying nimble.

By explaining how regulatory partners fit into the approval process, Pfizer and BioNTech’s joint statement also demonstrates how to address skeptics and detractors by being transparent about your decision-making process and next steps. 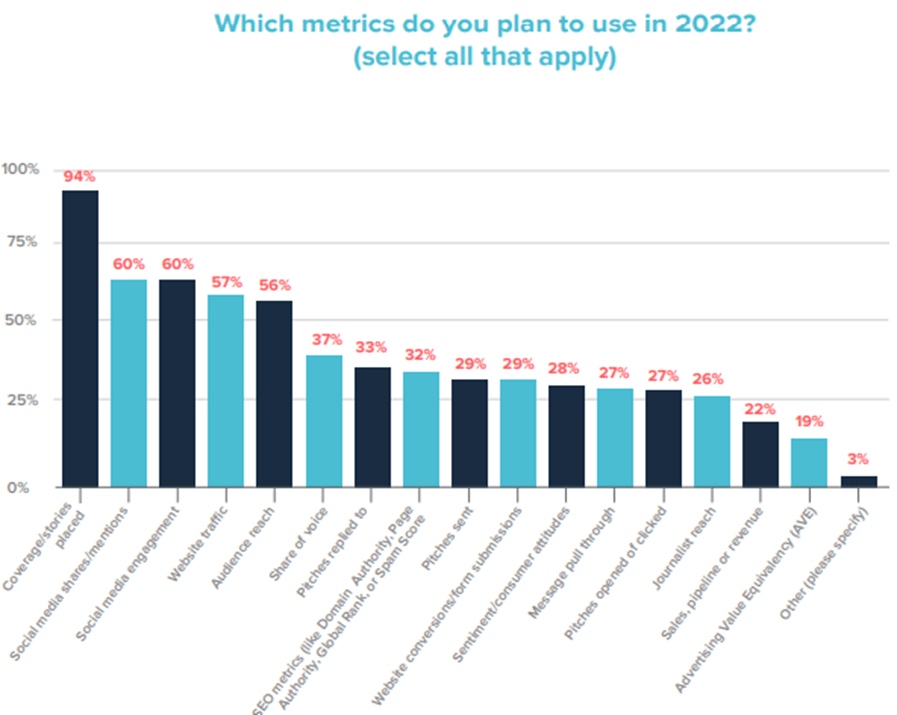 These findings suggest that social media measurement will become an increasingly a crucial component to communications strategies in 2022, with engagement’s equal importance to shares and mentions demonstrating that communicators are seeing the value of measuring conversation beyond vanity metrics.

Meta, the company formerly known as Facebook, has delayed plans plans to roll out end-to-end encryption across all of its messaging platforms, including Messenger, Instagram and WhatsApp.

On the one hand, Meta wants its users to have privacy when using the products. On the other hand, regulators and observers have raised concerns over how such a level of security shields Meta itself from being able to track criminal activity on its platforms.

Meta global head of safety Antigone Davis acknowledged the delay in an opinion piece for The Telegraph, acknowledging critics of the end-to-end encryption plan and the complicated catch-22 that such a rollout would create.

“At Meta, we know people expect us to use the most secure technology available, which is why all of the personal messages you send on WhatsApp are already end-to-end encrypted and why we’re working to make it the default across the rest of our apps. As we do so, there’s an ongoing debate about how tech companies can continue to combat abuse and support the vital work of law enforcement if we can’t access your messages. We believe people shouldn’t have to choose between privacy and safety, which is why we are building strong safety measures into our plans and engaging with privacy and safety experts, civil society and governments to make sure we get this right.”

Davis’ words on the push and pull between privacy and safety demonstrate the power of executive communications to distill a complicated conundrum into a simple, values-based talking point.

Several brick-and-mortar stores were robbed during Thanksgiving week, including California Apple and Nordstrom stores on Wednesday and a Minnesota Best Buy store on Black Friday. Earlier in the week, Best Buy CEO Corie Barry acknowledged a recent retail security study that found 69% of retailers reported an increase in organized in-store crimes over the past year. As a result, Barry said Best Buy would implement new security measures, including putting QR codes on locked products that let customers pay for the products before the products are released to them.

“We are finding ways where we can lock up product, but still make that a good customer experience,” Corie Barry, Best Buy’s chief executive, said on an earnings call on Tuesday. “In some instances, we’re hiring security. We’re working with our vendors on creative ways we can stage the product.”

Still, she said, the pressure was visible in the company’s financials — she named it as one reason Best Buy saw a decline in its profit margin rate — and “traumatizing for our associates.”

“Our priority has always been and will remain the safety of our people, whether that’s the pandemic, whether that is unruly customers, whether that is outright theft, which is a great deal of what we’re seeing right now,” Ms. Barry said this week. “This is a real issue that hurts and scares real people.”

Barry’s words show how your executives can reframe a negative trend as an opportunity for innovation and increased partnerships. They also illustrate how making sure that your messaging prioritizes concern for your ground-level workforce and employees—even on an earnings call—reinforces your corporate reputation to all stakeholders and can promote a sense of community in media coverage about your brand.

One Response to “Vaccine makers share strategy for Omicron variant, what communicators are measuring in 2022, and Best Buy touts employee safety”

A rose by any other name may smell as sweet but Facebook, whether called Meta or by any other name smells like money. Except for Google, can we think of any other company that actually gives away free service to millions or billions of people yet makes tons of money?

Facebook seems likely to be even more successful in Washington if the company argues not just for “fairness to us” but “fairness to you the public.” If Facebook is guilty and forced to pay fines because bad guys sometimes use Facebook, should taxpayers be guilty–and subject to lawsuits millions in damages—because bad guys sometimes get where they are going by using public roads?

Should a company be guilty, and have to pay damages, if someone secretly records a company employee saying really disgusting things to a friend on a company telephone?

The key question is whether each of us, individually or as stockholders in a company, should have to DO something criminal—or fail to prevent criminal behavior by someone under our control—or should the government be able to jail us or fine us for some criminal act that we didn’t do and was done by someone else?

PR wisdom in a public controversy is to show the public who is on each side. With Facebook it’s not the public (which is getting free service) vs. the company, it’s publicity-seeking politicians vs. the company, and it’s lawyers who sue for a living vs. the company. The public has no way to gain even if the government could send Facebook’s CEO and board of directors to jail for 20 years!

Money talks so when a company’s general counsel earns, as is common, three or more times as much as the PR chief by whatever title, the money says to the CEO to go with the advice of the lawyer and the law firm which may bill over 20 times as much as the company’s PR firm. So look at the difference in advice the CEO gets and commonly follows:

COMMON GENERAL COUNSEL ADVICE: The public decides based on rational arguments Just as individuals do or PR should show, accusation by accusation, why we are right and the accusers are wrong.

COMMON PR CHIEF ADVICE: The public decides based not only on rational argument but which side the public LIKES more. So we should not just present rational arguments but do some huge public service—like promising to spend a billion over the next five or ten years to find a vaccine for cancer or heart disease, each ailment now killing many times more Americans than Covid.

Biblical wisdom is to GIVE that ye may receive, not argue like a lawyer that ye may receive. Lawyers receive fees but companies that give to the public can receive massive gratitude that can protect and save billions a year for companies like Facebook that help millions of us free every day.

Zuckerberg has increasingly been pictured in a shirt and tie but it could pay him for Facebook to sponsor the hunt of a cancer vaccine even if the cost would require him to go back to wearing dark T-shirts. He’s already giving the public millions of dollars worth of service free every day but it could pay to also give the public the shirt off his back.