The contest is also requires the winner (along with two runner-ups) to tweet or livestream the experience under the hashtag #CHBraveNewWorld. 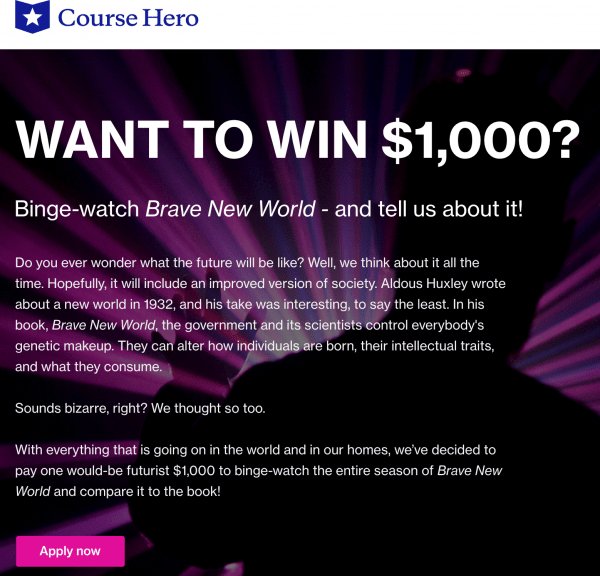 The journalists—Sohla El-Waylly, Priya Krishna and Rick Martinez—have announced they will no longer record videos after negotiations to adjust their pay and meet diversity and inclusivity promises fell through. Bon Appétit’s on-camera staff have refused to create videos since the negotiations started.

“After five weeks of contract negotiations,” Mr. Martinez wrote, “it is clear that I will not get a fair pay rate nor will I get a comparable number of appearances to my colleagues in the test kitchen. Nor would anyone share with me the specifics of the diversity and inclusivity initiatives in video that they claim to be working on.”

Condé Nast maintains that its pay practices “are in line with industry standards.”

"Our pay practices are in line with industry standards. To suggest that we are not paying individuals differently based on race, gender or any other reason simply isn't true," a representative from Condé Nast said. https://t.co/0fJ6gillN9

Why it’s important: The news has made headlines and trended on Twitter, overshadowing Bon Appétit’s announcement that Sonia Chopra is its new executive editor. (The feedback on Twitter is brutal, too.) If your employees are unhappy, the truth will eventually come to light—and often, it will result in a tarnished reputation and eroded consumer trust.

Miller Lite has adjusted its International Beer Day campaign to offer consumers free beer if they visit and purchase a case in certain United States cities.

Can’t travel internationally? You can still enjoy Miller Time on National #InternationalBeerDay with Miller Lite on us in US cities named after a country. Check out this article to find an “international” city near you! https://t.co/KG6uGEFNj4 #ItsMillerTime pic.twitter.com/pyqJRA3jHR

For example, certain zip codes in Maryland will stand in for Scotland, Idaho will temporarily be dubbed Malta and New Mexico will masquerade as Cuba.

The effort is a creative way to help consumers “travel” during COVID-19. Don’t be afraid to get creative when adjusting your efforts throughout the pandemic.

The departures by journalists of color for Bon Appétit’s “Test Kitchen” YouTube series highlights a couple of important PR and marketing truths. First, video content, when done well and coupled with excellent storytelling strategies, has the power to boost your bottom line. Social Blade reports that the Condé Nast publication earns between $3,200 and $51,000 each month for its YouTube channel:

The second lesson is how much your organization’s diversity, equity and inclusion efforts can also affect your bottom line (along with your brand reputation).

Your organization’s YouTube presence might not command the numbers of Bon Appétit’s (with more than 2 million views on several of its “Test Kitchen” videos), but video content can strengthen your content marketing campaigns and help expand your reach.

Just remember that your organization’s diversity, equity and inclusion efforts can negatively affect more than your brand’s image. If you’re not willing to commit to efforts that not only welcome, but actively seek out people of color to join your workforce, be prepared to lose employees—and have a tougher time attracting top talent.

The social media company announced that its employees can continue to work remotely for almost another year due to COVID-19.

“Based on guidance from health and government experts, as well as decisions drawn from our internal discussions about these matters, we are allowing employees to continue voluntarily working from home until July 2021”, a Facebook spokeswoman said in an emailed statement.

“In addition, we are giving employees an additional $1,000 for home office needs,” it added.

The news follows announcements from Google that its employees can work from home until June of next year, and Twitter’s decree that its workforce can remain remote indefinitely.

Why it’s important: If you’re still treating the COVID-19 crisis—and your remote workforce arrangements—as a short-term initiative, you might want to adjust your strategies. Solicit feedback from your employees and consider how you can better support them while they stay at home. Evaluate how your frontline employees are doing and how you can better empower your mangers to communicate and support essential workers. Doing so can improve your workplace culture as well as boost productivity.

Hasbro is pulling a “Trolls World Tour” doll after backlash that called the figurine inappropriate.

The doll, “Trolls World Tour Giggle and Sing Poppy,” will say a variety of phrases when you press on its stomach. It’s also supposed to giggle when it sits, but the button to activate the noise is placed between the doll’s legs, under its skirt.

“This feature was designed to react when the doll was seated, but we recognize the placement of the sensor may be perceived as inappropriate,” Hasbro spokeswoman Julie Duff said in a statement. This was not intentional and we are happy to provide consumers with a replacement Poppy doll of similar value through our Consumer Care team. We are in the process of removing the item for purchase.”

The crisis serves as a reminder to vet your products as well as your PR and marketing campaigns, so you can avoid potential backlash as well as an expensive backtrack.

We asked which email phrases raise your hackles, and almost 43% of you loathe the term “per my last email” or “per our last conversation.” More than 26% are annoyed by requests to “circle back,” while nearly 17% don’t like to have someone “just loop in” another person. Roughly 14% say their pet peeve is an email “confirming receipt.”

Which of these email phrases is your pet peeve? (Are you guilty of any listed below?)

Amanda Ponzar, chief communications and strategy officer for Community Heealth Charities, shared her responses to common email phrases (to which you might relate):

Popping this to the top of your inbox. (Though I probably needed reminder.)

Checking back in. (For the 4th time?)

You may have missed my email. (No, I deleted it; you're spam.)#emails #petpeeves #DailyScoop https://t.co/fAetbApgGm

What’s your most important desk accessory as you work from home during COVID-19?

What's your most important desk accessory as you work from home during COVID-19?

Weigh in below and reply with a picture of yours/share under #DailyScoop, and we'll share on Monday.

Have a great weekend!

Your headline about the Facebook WFH option is misleading; “allowing” employees to “voluntarily” work from home is not even close to a “mandate.” In fact, ‘voluntary’ anything is sort of an antonym of ‘mandate.’

That said, I do appreciate the updates on what these companies are doing and saying.

Your point is well taken, thanks Lori.

Priya Krishna refers to her job at Bon Appetit, top gourmet food magazine, as “disappointing and insulting” because she is paid $300 for a few hours work, called a “shitty situation.” Rick Martinez will no longer record videos at Bon Appetit “after negotiations to meet diversity and inclusivity promises fell through.”

Yet a leading medical newsletter, Medpage Today, reports in a recent issue that “a famous NYU Langone surgeon Dr. Joel Solomon still takes time to do routine office visits because patients need this” although the work may actually pay under $300 after expenses for a few hours work.

It’s certainly true that NYU Langone and Memorial Sloan Kettering have so much prestige that working there provides a LOT of job satisfaction on top of the money. But working at Bon Appetit is also an honor so PERHAPS—and I’m not saying it’s so—seeing ones employment as “a shitty job” may come not just from the job but from a shitty attitude.