Today is Fat Tuesday, or Mardi Gras, as the AP Stylebook tweeted:

This year's Mardi Gras looks different because of COVID-19, but today is Fat Tuesday, the day before Lent starts on Ash Wednesday.
(If you're celebrating virtually, we do not use Zoom as a verb. We would write "a Zoom party" or "a party held via videoconference," for example.) pic.twitter.com/66hDHD13aR

If you’re one of the many shifting your celebrations to virtual platforms, the resource advises against using “Zoom” as a verb.

‘Bachelor’ host steps aside after backlash

Chris Harrison, host of ABC’s “The Bachelor,” announced that he was stepping aside following growing criticism over his defense of Rachael Kirkconnell, a current contestant on the show.

Kirkconnell first found herself in hot water after a TikTok went viral, claiming to show her liking posts with the Confederate flag and even sharing QAnon conspiracy theories.

And just last week, a post on Reddit allegedly showed the “Bachelor” contestant at a 2018 “Old South” college formal, or a plantation-themed party.

Earlier this week, Harrison told “Extra” correspondent and former star of “The Bachelorette,” Rachel Lindsay, that Kirkconnell’s pictures were a long time ago and spoke out against cancel culture.

… Lindsay replied, “The picture was from 2018 at an Old South antebellum party. That’s not a good look.”

“It’s not a good look ever,” Lindsay said. “If I went to that party, what would I represent at that party?”

Harrison issued an apology through his Instagram account, announcing he would not attend the season’s final episode:

The historic season of “The Bachelor” should not be marred or overshadowed by my mistakes or diminished by my actions. To that end, I have consulted with Warner Bros. and ABC and will be stepping aside for a period of time and will not join for the “After the Final Rose” special. I am dedicated to getting educated on a more profound and productive level than ever before. I want to ensure our cast and crew members, to my friends, colleagues and our fans: this is not just a moment, but a commitment to much greater understanding that I will actively make every day.

Kirkconnell also issued an apology on Instagram, writing: “I didn’t recognize how offensive and racist my actions were, but that doesn’t excuse them.”

Why it’s important: Kirkconnell’s actions and Harrison’s words were criticized even more considering that Matt James is the show’s first Black “Bachelor”—in its 25th season. Lindsay previously made history by becoming the first Black “Bachelorette” in 2017—in the sister show’s 13th season. Lindsay has also said on her “Higher Learning” podcast that once her contract with the network is up, she “can’t do it anymore” and will cut ties.

The show’s lack of diversity has been called into question before, but the latest crisis is a problem for the ABC brand—especially after its host interrupted and talked over its first Black “Bachelorette” to defend racist actions by a current contestant. If you want to avoid the same scrutiny, take a brutally honest look at your organization’s actions and policies, make meaningful DE&I commitments and be accountable for them.

Happy National Pancake Day Bisquick (foreground) & Flapjack! Our pancake tortoises enjoy climbing around their homes. Their shells are lighter & more flexible than other tortoise shells, which enables them to navigate rocky terrain in Africa & hide in rock crevices to stay safe! pic.twitter.com/bCajKm72wG

Ready to eat all the pancakes today? Here's how many you'll have based on your birth month pic.twitter.com/NR53kWb867

Please sign this petition to have Pancake Day recognised as a national holiday 🤤 pic.twitter.com/SSstyNPoJl

Meanwhile, IHOP has announced that it’s offering its email club members coupons after canceling its famous Pancake Day offer of a free Short Stack of its buttermilk pancakes. The casual dining chain is also encouraging consumers to make donations online or in its restaurants that support Children’s Miracle Network Hospitals.

At IHOP, our top priority is the safety of our guests and team members. Given nothing about this past year has been ordinary—and while we look forward to celebrating National Pancake Day with guests under our blue roof in the future – we recognize it’s not possible to gather millions of our closest family and friends in our restaurants on a single day this year. As a result, we decided to flip National Pancake Day on its head and give our guests an entire month to redeem their free Short Stack with an IOU, while also continuing to put purpose behind our pancakes by giving back to those most in need: our charity partners.

Socialbakers analyzed brands’ Instagram engagement from Jan. 1 to Feb. 2, 2021, revealing the top 10 branded account that garner the most “likes” on the social media platform: 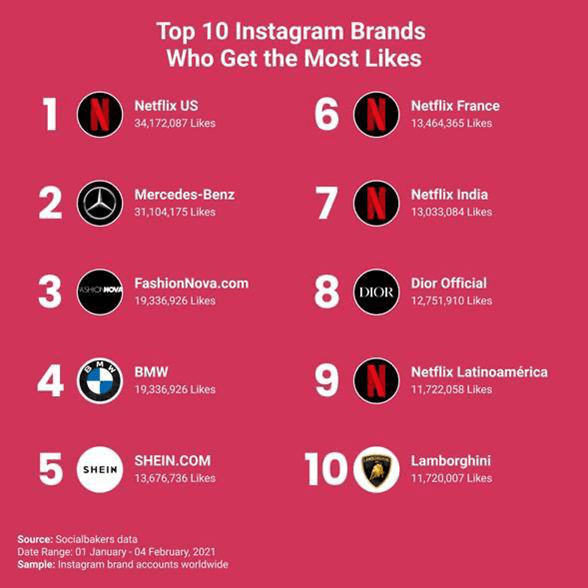 Netflix led the engagement with more than 34 million “likes,” with Mercedes-Benz securing the No. 2 spot with more than 31 million Instagram “likes.” Netflix’s Instagram accounts for its France, India and Latinoamérica arms also made the top 10 list.

Though you can find many images and short video clips from its shows on Netflix’s Instagram account, its social media team also shares memes, inside peeks and interviews with actors and actresses, and advice on a variety of topics, such as actress Logan Browning’s well-being tips:

The team at Indianapolis Museum of Art at Newfields was sent scrambling after a job listing quickly made the rounds online for its discriminatory language.

Posted on m/Oppenheim Executive Search, the job post called for a director who would “animate the permanent collection galleries in innovative ways that attract a broader and more diverse audience while maintaining the Museum’s traditional, core, white art audience.” A social media firestorm started almost immediately early Friday evening after an artist posted the excerpt on Facebook and in an Instagram story.

The museum’s director and chief executive, Charles L. Venable, said in an interview on Saturday that the decision to use “white” had been intentional and explained that it had been intended to indicate that the museum would not abandon its existing audience as part of its efforts toward greater diversity, equity and inclusion.

“I deeply regret that the choice of language clearly has not worked out to mirror our overall intention of building our core art audience by welcoming more people in the door,” he said. “We were trying to be transparent about the fact that anybody who is going to apply for this job really needs to be committed to D.E.I. efforts in all parts of the museum.”

The museum removed the wording from the position’s listing and issued an apology over the weekend as outrage grew:

Why it matters: Venable told The New York Times that it was unfortunate that “what he called the museum’s “core commitment to inclusion’ had been overshadowed by a word choice,” but also told The Times that the museum “wouldn’t write it that way” after receiving the negative feedback. However, the situation could have been avoided had the team sought internal feedback or external professional DE&I counsel prior to posting the listing. Now, they’ll have the additional task of rebuilding trust and reputation.

The U.K. team for telecommunications company Three is offering a series of virtual workshops on Zoom through its “Discovery” campaign, which runs Feb. 15-19.

Keeping the kids entertained during half-term is hard enough without being in the middle of another lockdown. So, to give you a helping hand, our Discovery team will be running some junior sessions.

They’ll keep your kids occupied with sessions on everything from creating their own cartoons to making digital music. Got a future YouTube star? They can even learn how to film and edit videos.

All sessions are suitable for complete beginners and last for an hour – between 14:15 and 15:15 each day. And you can either join in with the fun or grab a hot cuppa, while you can.

The effort can give you inspiration when creating virtual efforts to connect your consumers, employees and other stakeholders.

What word—and accompanying GIF—best describes your work in PR, marketing or social media?

What word–and accompanying GIF–best describes your work in PR, marketing or social media?

Respond with your answer, and we'll share in tomorrow's #DailyScoop! pic.twitter.com/54DKho1lKS

Weigh in below or on Twitter, and we’ll share your insights in tomorrow’s roundup. Is there question you’d like to see asked? Please let us know under the #DailyScoop hashtag!