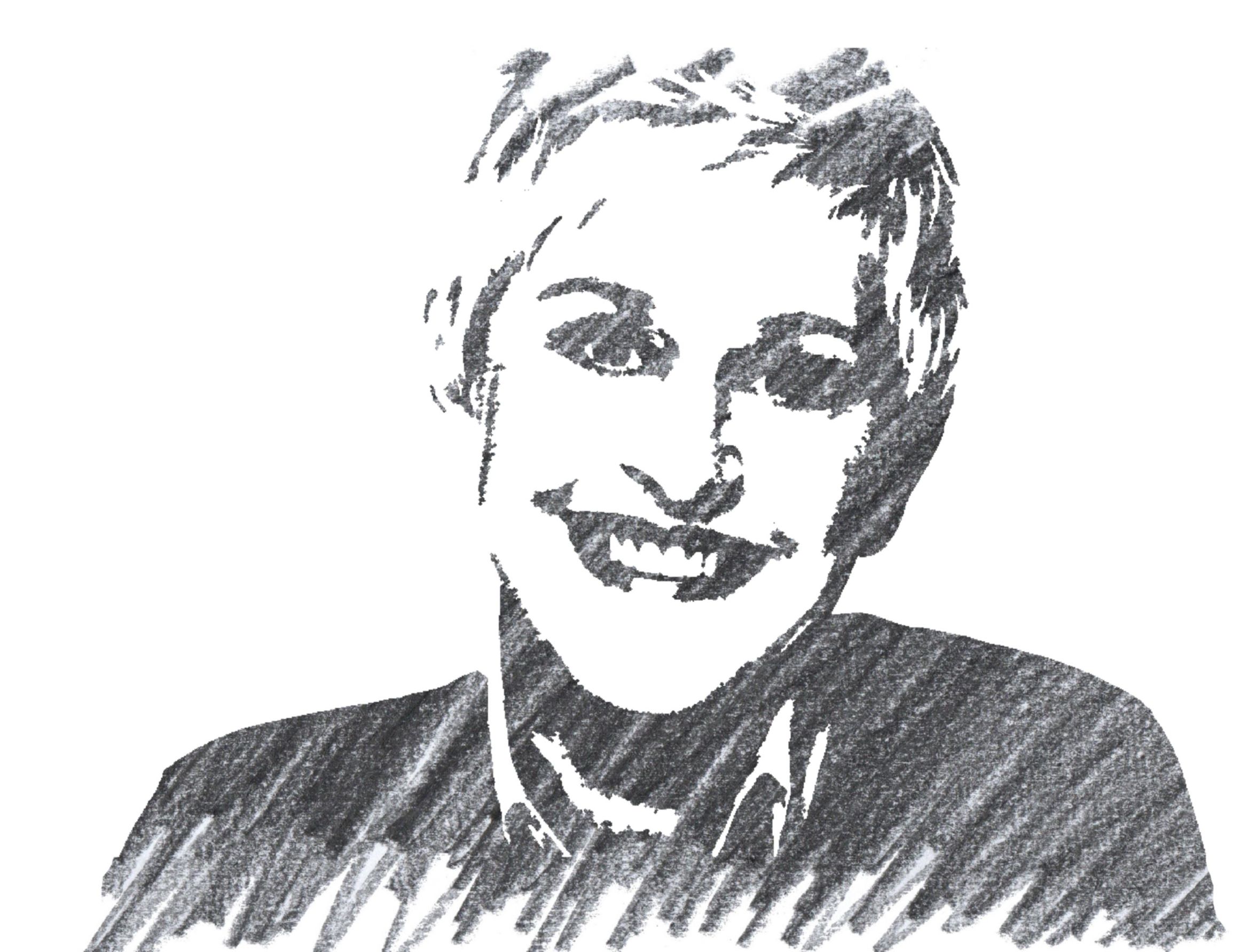 U.S. air traveler numbers have topped 1.5 million for the first time since March 2020 according to the Transportation Security Administration, a sharp rebound after the 60% decline of U.S. air travelers in 2020.

The milestone comes amid continued warnings from the CDC that people avoid air travel, but the agency has not yet issued new travel advisories. “It has so far declined to issue new guidance on travel for vaccinated Americans out of concerns prompted by travel-related surges that the United States encountered during previous holiday periods,” reports CNN.

While communicators should feel confident that the back half of this year will bring some return to “business as usual,” it is important to temper that optimism with continued concern and messaging around safety.

When the latest season of Ellen DeGeneres’ daytime talk show, returned to air in September after a summer hiatus following allegations of a toxic culture on set, DeGeneres kicked things off with an apology that gave the show its highest ratings of a season premiere in four years.

Since September, however, the show averaged 1.5 million viewers, a sharp decline from 2.6 million during the same period the year prior. This 43% decline marks a steeper drop in viewership for “The Ellen DeGeneres Show” than any of its competitors.

The decline has come at a time when workplace behavior, in Hollywood and elsewhere, has come under intense scrutiny against a backdrop of protest and social change. It is a startling setback for one of daytime television’s most successful franchises and for Ms. DeGeneres, who was at the forefront of an earlier cultural shift when, as the star of a prime-time network sitcom in the 1990s, she announced that she is gay.

While the events of this past year have brought renewed attention to workplace wellness gaps between employees and employers, “The Ellen DeGeneres Show” ratings decline reminds us that a toxic workplace culture can inevitably cause external, lasting reputational damage. Make sure that the culture your company communicates externally matches with what employees are experiencing by creating consistent channels for dialogue between employees and leadership. Conduct workplace surveys, and act on the data by following up to address employee concerns.

Krispy Kreme donuts announced yesterday that the franchise will offer one free donut per day to customers who show their COVID-19 vaccination card:

We'd like to show sweet support to those who have received the COVID-19 Vaccine. Starting today, bring your Vaccine Card to a Krispy Kreme shop and get 1 FREE Original Glazed doughnut. No chance to get your Vaccine? This will run thru end of 2021. Info at https://t.co/gWnWhXOKKq pic.twitter.com/UqmDLne5E9

Some praised the campaign’s promotional image by pointing out its clever pun:

Can we all just take a minute to appreciate the underpaid person who came up with “Jane Dough” on the Krispy Kreme Covid vaccine promotion. pic.twitter.com/obeFlW9zVs

Others alluded to the fact that, while the offer promotes one push toward health, it also encourages obesity:

Others, still, accused those crying “obesity” of fat shaming:

It's fun watching all the folks who think trashing Krispy Kreme gives them some kind of virtuous cover to express their completely typical loathing of fat people. #obesity

People who refuse to wear masks screaming about the unhealthiness of Krispy Kreme & obesity make me laugh. They clearly don’t care about the health of others, they’re just looking for another opportunity to be hateful.#obesity #krispykreme

While the spirited debate around the optics of this campaign ultimately brought more press and media attention to Krispy Kreme, communicators should always collaborate with the marketing team, reviewing its work and being deliberate in how that work is communicated. This is especially necessary during discussions around any campaign relating to promotions, or incentives, for customers who show proof of vaccination.

intelligence and research and start to strategize for the future of your organization.

Microsoft announced yesterday that its headquarters in Redmond and Seattle, Washington will begin its limited re-opening on March 29th with a hybrid workplace approach. This moves the marker on the company’s “Hybrid Workplace Dial” it revealed last year to the soft opening stage: 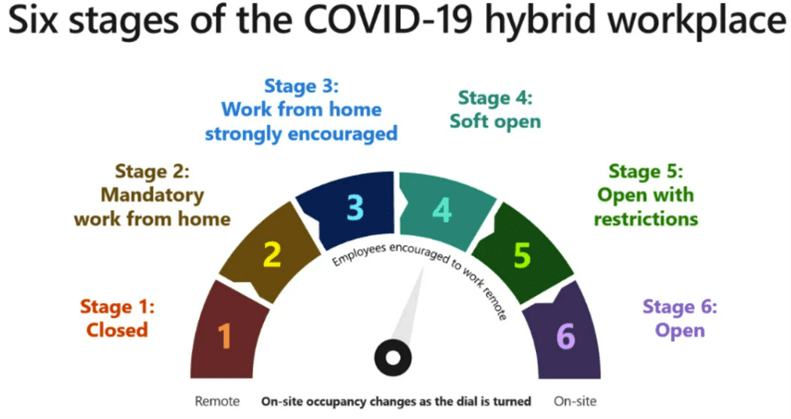 Communicators will note that this illustration, with its color-coded thresholds outlining each step in the transition, isn’t all that different from the thresholds that would be present on a crisis plan. Consider that mapping out your company’s plans for reopening may wind up looking like a crisis plan in reverse.

Microsoft has also supplemented its aforementioned hybrid work strategy yesterday with the release of its “Work Trend Index” study,  which surveyed workers to better understand what work habits people hope to maintain, or change, once COVID-19 subsides. 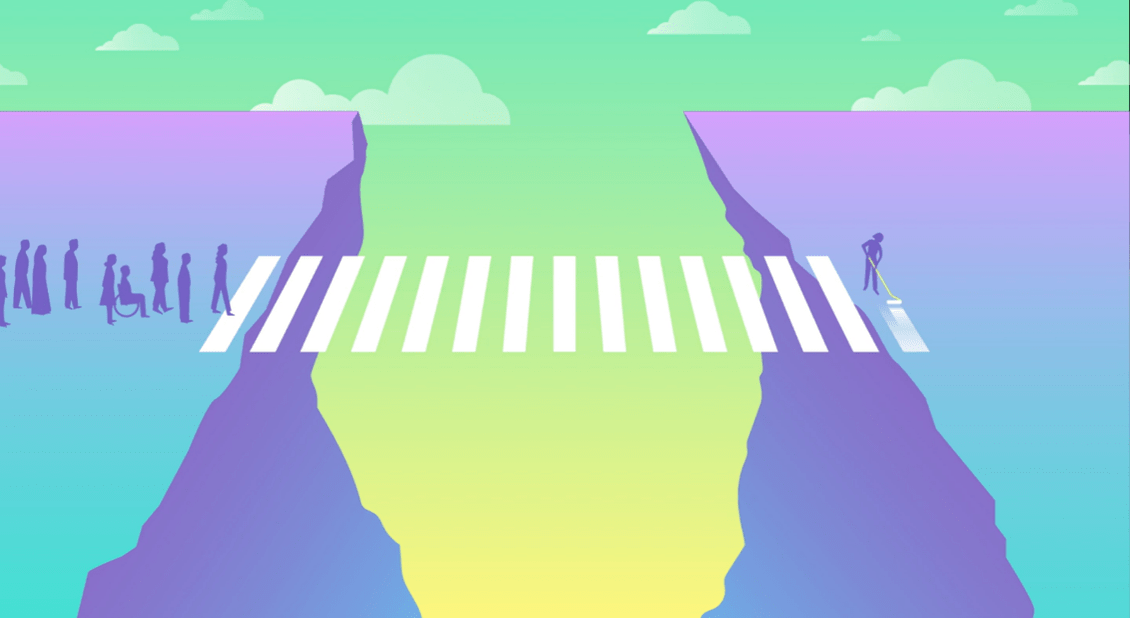 “[A]mong the more than 31,000 workers it surveyed, 73% hoped remote work options would continue when the pandemic ends,” reports CNET. “Even Gen Z applicants were slightly more likely to apply for a job with remote options than for one strictly in an office. But those workers are also facing particular drawbacks…by saying they’re more stressed and find they’re struggling more than their peers. They tend to be single, since they’re younger, leading them to feel isolated. And since they’re early in their careers, they don’t have financial means to create a good workspace at home if their employer won’t pay for it.”

The PR Council (PRC) has opened registration for year two of its popular Agency-Ready Certificate program, which starts on June 8. The program was created to address the litany of internship programs and entry-level positions that were suspended or canceled due to the COVID-19 pandemic.

The program awarded 2,000 certificates last year, and the council said that many graduates were offered new positions by PR Council member companies.

“We designed the program to be particularly informative to non-PR or Communications majors and also to provide real-world training and industry insights to those majoring in the field,” PRC President Kim Sample said in a statement. “Sessions include earned media, client service, and writing, which are always important to industry success. Students will also learn about integrated marketing, data and analytics, and the mandate for diverse and inclusive workforces, all of which is critical knowledge in successful agencies.”

College students, recent grads and others interested in learning more about the agency business can register here or contact ARCHelp@prcouncil.net for more information.

Responding to a new federal rule that requires hospitals to publish their previously confidential prices online, many hospitals have hidden that data from search results by blocking it using special coding on their websites.

The code keeps pages from appearing in searches, such as those related to a hospital’s name and prices, computer-science experts said. The prices are often accessible other ways, such as through links that can require clicking through multiple layers of pages.

“It’s technically there, but good luck finding it,” said Chirag Shah, an associate professor at the University of Washington who studies human interactions with computers. “It’s one thing not to optimize your site for searchability, it’s another thing to tag it so it can’t be searched. It’s a clear indication of intentionality.”

[I]t’s worth noting that some hospitals claim that not all of these search-blocking code snippets were left intentionally. In some cases after being contacted by the Journal, hospitals pulled the snippet from their site, saying it was a piece of “legacy code” that was no longer needed. Others said that the code was left on their website “in error.” In some cases, the code could’ve been left as the hospitals worked to tighten up these pricing pages as a way to prevent the drafted document from being indexed in search—and whoever was responsible for the page simply forgot to take the snippet off.

Intentions aside, this incident reminds communicators that company transparency extends far beyond your messaging to all aspects of your organization. As new federal regulations are passed to address privacy concerns and industry-specific needs, making sure that your company operates above board also means partnering with SEO teams, developers and colleagues who work on the backend to ensure that your information is not only clearly communicated, but easily accessible as well.

We asked what your first work priority was after sitting down on Monday.  A solid 60% of you kick off the week be replying to emails, while 27% of you plan your week before anything else. Only 11% of you check in with your team first thing, however, and just 2% of you start things off by checking in with leadership.

After coffee, what’s the first thing you do when sitting at your desk on this first Monday of Spring, PR pros and communicators?

Let us know your Monday priorities below under the hashtag #DailyScoop. We’ll share top responses in tomorrow’s roundup.

What GIF best expresses your feeling when a journalist agrees to coverage after the first follow-up pitch, PR pros and communicators?

What GIF best expresses your feeling when a journalist agrees to coverage after the first follow-up pitch, PR pros and communicators?

Share your best face of earned media satisfaction below under the hashtag #DailyScoop. We’ll share top responses in tomorrow’s roundup.

The Ellen DeGeneres Show scandal highlights the importance of a healthy and ethical work environment within organizations. As you pointed out, this is especially prevalent in the context of our country’s movement toward social justice after months of protests. As PR professionals, it’s our job to maintain a clean reputation for the company, and this starts internally with a suitable work environment.

The best way to avoid misunderstanding and mistreatment in the office is by practicing open communication between staff and company leadership. This can be done in a variety of ways, but I like your suggestion to conduct workplace surveys. It’s a simple, yet efficient way to determine the status of your employees.