As McDonald’s has jumped on today’s National French Fry Day to mark the launch of its new loyalty program, National Gummi Day on July 15 is waiting right around the corner in all its sticky glory.

Ahead of this latest food holiday, Skittles is launching a “Squish the Rainbow” pledge that encourages fans to support the candy brand’s “safe space for gummi animals,” which takes the form of a virtual gummi animal sanctuary that will go live on National Gummi Day. Skittles has also released a PSA that encourages gummi fans to protect gummi animals (think bears, sharks etc) from being eaten and eat Skittles gummis instead:

“At Mars Wrigley, we’re always thinking of unexpected ways for people to engage with and enjoy our SKITTLES products,” Fernando Rodrigues, senior brand manager for Skittles said in a press release. “With the creation of our SKITTLES Gummi Sanctuary, we hope to provide better moments, more smiles and a playful way for our fans to celebrate National Gummi Day on July 15.” 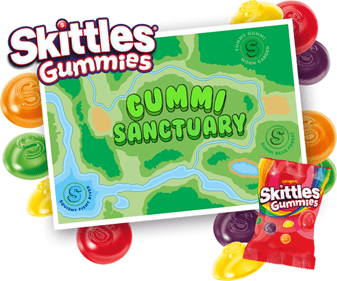 Skittle’s campaign is a clever, lighthearted way to remind candy lovers of the brand’s presence in the bear-dominated gummi market. While its parody of animal rights campaigns and conservation efforts may strike some as insensitive, the candy brand’s deployment of an influential comedian to carry its message home helps audiences not take the campaign too seriously.

Remember to do research on your audience’s values and views before infusing humor into your messaging as it can quickly backfire. In this case, animal rights activists likely aren’t consuming gummi products, anyway.

The FDA announced that it has identified an increased risk of contracting a rare neurological disorder called Guillain-Barré syndrome (GBS) in the six weeks after inoculation with the Johnson & Johnson (J&J) COVID-19 shot. The company was quick to get in front of the news.

The safety and well-being of the people who use our products is our number one priority.

Rare cases of the neurological disorder, Guillain-Barré syndrome have been reported following vaccination with the Janssen COVID-19 vaccine. Most occurred within 42 days after vaccination. While the chance of having this occur is very low, Johnson & Johnson has updated its COVID-19 Vaccine Factsheet to include important information about these rare cases and on the signs and symptoms of Guillain-Barré syndrome. Updates with this new information will be implemented in other regions of the world according to local regulatory procedures.

Although the available evidence suggests an association between the Johnson & Johnson vaccine and increased risk of Guillain-Barré, “it is insufficient to establish a causal relationship,” the FDA said.

Though its press release was shared just hours before the FDA’s official announcement, J&J demonstrated that it has learned from past hiccups around vaccine communications and is making good on past commitments to provide “open communication” around vaccine distribution by getting out in front of the FDA’s announcement, updating its factsheet and acknowledging the chain of command for communicating its information with global regions. Whether or not you work in a heavily regulated industry, remember that partners will be better prepared to support your work and message when the data and conclusions come from your company first.

A new infographic from BuzzSumo demystifies the process of creating evergreen content. It explains that evergreen content, so labeled because it stands the test of time and continues to reach readers amid changing news cycles, performs best when it is produced based on research like search and social trend data. The evergreen content creation process, meanwhile, involves a decision around whether to update an existing piece of content or start one from scratch.

This infographic makes the case for communicators learning SEO by highlighting the role that SEO should play in ensuring your content has a long life span, especially BuzzSumo’s evergreen content formula: Evergreen Content = Links + Shares + Time. These tips also serve as a reminder that SEO best practices like keyword search and link building should not be afterthoughts that are added to a story later, but skills that should be considered from the outset of the content creation process.

Games for Change, an annual festival centered around using video games for social good, has kicked off with an effort to dig deeper into issues that people of color face in the gaming industry. The festival includes several events that highlight its commitment to multiple communities, including “Representing Asian American History in an Educational Game,”
“A Multiplayer Dating Game to Empower Black Teen Girls” and “Developing Indigenous Developers.”

Games for Change president Susanna Pollack told Axios that events like the murder of George Floyd and rising violence against Asian Americans “absolutely did” impact how they approached its 18th festival.

“We’ve always thought intentionally about our Games for Change Festival and making sure that it’s a platform for diverse voices,” Pollack said. “But this year in particular, we felt that we wanted to really double down on that effort.

“I think it’s a systemic issue. That means it’s going to take a while to change, and we as an industry need to encourage young students and young kids at younger ages to realize that this is a career that could be for them.”

Pollack pointed to Niantic’s Black Developers Initiative as one example of “literally putting money into the hands of independent developers,” which she says “will nurture an independent, creative community.”

While Games for Change doesn’t share specific data and numbers around the disproportionate issues that people of color face in the gaming industry, Pollack’s specific example of Niantic’s initiative, along with her focus on where the industry needs to start changing its ways, underscores the festival’s new focus and mission. The varied identities and cultures represented in its session topics, meanwhile, serve as a reminder that your DE&I work can go beyond simply checking a box or meeting a quota if you identify broader goals. Provide a platform for conversations to those who do not have one by looking at your audience data to learn who is doing the work, then ensure they are represented at your organization or event with a presence equal or greater to their presence in the industry.

“Particularly with the pandemic, what we thought was going to happen with the online business over time ended up happening very quickly because stores were shut down,” [Nordstrom president and chief brand officer Peter Nordstrom] said. “What we continue to believe is that the main ingredient for success in the future is how these things work together.”

“We want to make sure we can bring in relevant fashion at a good value to customers, but I think there’s also the whole point of discovery and new things that are piquing their interest,” Mr. Nordstrom said. “They get exposed to so many more things. It’s not just ‘This is my local mall, this is my selection.’ They know their selection is the entire world.”

“For me, the pandemic created an opportunity to think about the business differently,” Mr. Nordstrom said. “It accelerated the idea that a legacy way of approaching business and customers probably wasn’t going to work.”

In explaining Nordstrom’s increased focus on e-commerce, Peter Nordstrom’s strategy serves as a reminder that hybrid business experiences aren’t going away, even as the pandemic subsides. Consider how unforeseen setbacks and crises can create new opportunities by crafting communications that don’t look at every business or new model that disrupts your space as a competitor and instead considers them as a potential partner.

Professional tennis player and Olympic athlete Naomi Osaka has written an essay for TIME that goes deeper into her views on burnout, mental health and how they can be exacerbated by the current format of media events. Osaka has been at the center of global conversations around mental health after she withdrew from The French Open following criticisms by its organizers over her decision to not participate in press conferences.

I have always enjoyed an amazing relationship with the media and have given numerous in-depth, one-on-one interviews. I always try to answer genuinely and from the heart. I’ve never been media-trained, so what you see is what you get. The way I see it, the reliance and respect from athlete to press is reciprocal.

However, in my opinion (and I want to say that this is just my opinion and not that of every tennis player on tour), the press-conference format itself is out of date and in great need of a refresh. I believe that we can make it better, more interesting and more enjoyable for each side. Less subject vs. object; more peer to peer.

Osaka’s thoughts on how press conferences should change echo larger trends in media relations and communications that have emerged over the past 17 months on social audio platforms like Clubhouse and in town hall meetings with stakeholders. Whether the person being interviewed is an executive sharing thought leadership on behalf of your organization or a star client being interviewed by reporters, your function as a communicator should adapt as you create a space for conversation and dialogue to happen instead of merely following standard formats for facilitating tit-for-tat exchanges.

Yesterday we asked if your leadership consults the comms team for media training ahead of interviews. A solid 41% of you said that leadership consults your team for both talking points and performance prep, while 36% are only consulted for talking points. Meanwhile, just 5% of you said that leaders only consult comms for help with performance prep and 18% said leaders don’t consult comms for any media training whatsoever.

Does your leadership consult the comms team for media training ahead of interviews? #DailyScoop

Is there a question you’d like to see asked? Let us know using the hashtag #DailyScoop!

Do you consider yourself to have a basic understanding of SEO best practices when crafting content, PR pros and communicators?

Do you consider yourself to have a basic understanding of SEO best practices when crafting content, PR pros and communicators? #DailyScoop

Let us know your SEO wins, if any, over the past year in the comments below. We’ll share the top answers in tomorrow’s #DailyScoop.

A classic PR blunder in J&J’s situation is to say: “See? It’s a very small percentage so the product isn’t as bad (and our company isn’t as guilty) as some say.”

What makes this a blunder is that if some people say “horrible” and the PR response is “not that bad,” the public is likely to guess that the product is somewhere between not that bad and horrible.

So a better PR response is that what’s especially horrible is Covid, which is truth you can support with persuasive facts, and that in well over 90% of cases the product protects beautifully against horrible Covid. This leaves the public to judge not whether the product is bad but whether Covid is hundreds of times worse. and defeatable by the product protecting beautifully.

Each common sense “Covid is worse” judgment you get can help sell the product to millions.