Spotify is working on Virtual Events

After tapping on the event, fans are informed that BTS will appear at a virtual concert on September 19. The event here is the 2020 iHeartRadio Music Festival, where BTS is scheduled to perform. In the example photos, Songkick is listed as the ticketing partner for this event.

A shift to include virtual event listings instead of live concerts wouldn’t be difficult for Spotify to implement. The company already works with ticketing partners including Ticketmaster, Songkick, Resident Advisor, Eventbrite, AXS and eplus in Japan.

Spotify declined to comment, but you can use the news as additional motivation to digitalize your offerings.

The National Basketball League announced it would reschedule the fifth game of the playoffs after the Milwaukee Bucks refused to take the court to protest the shooting of Jacob Blake.

The NBA and the NBPA today announced that in light of the Milwaukee Bucks’ decision to not take the floor today for Game 5 against the Orlando Magic, today’s three games – MIL-ORL, HOU-OKC and LAL-POR have been postponed. Game 5 of each series will be rescheduled.

Many of the Bucks’ players tweeted individual reactions, as did other players across teams.

In a joint statement, the players said:

Despite the overwhelming plea for change, there has been no action, so our focus today cannot be on basketball.

The Milwaukee Bucks have boycotted Game 5 of their First Round series vs. the Orlando Magic this afternoon.

An hour prior to the players’ joint statement, the organization tweeted its support:

The games are rescheduled for Thursday, but they might also be canceled, following a tense meeting in which NBA athletes voted to either end the playoffs or to continue playing. The Los Angeles Lakers and Clippers voted to leave the NBA bubble.

Yahoo Sports’ Vincent Goodwill reports that LeBron James initially planned to vote with the consensus, but got angry and stormed out of the meeting. He also reports that there was frustration that the Milwaukee Bucks decided to initiate Wednesday’s walkout on their own.

The Athletic’s Shams Charania reports that every team besides the Lakers and Clippers voted to keep playing. ESPN’s Adrian Wojnarowski reports that Wednesday’s player votes were not final and that discussions will continue through Thursday.

Why it’s important: As social justice protests and demonstrations continue around the world, it’s imperative that your organization get involved. That means listening to and working with your employees on goals and initiatives that will involve them while also underlining your organization’s values. Don’t delay, because your reputation and future talent pool are both on the line.

Salesforce is laying off 1,000 employees—roughly 2% of its workforce—despite the company reporting a revenue growth of 29% over last year.

“We’re reallocating resources to position the company for continued growth,” a spokesperson confirmed in a statement to CNBC. “This includes continuing to hire and redirecting some employees to fuel our strategic areas, and eliminating some positions that no longer map to our business priorities.”

Employees affected by the cuts are being given 60 days to find a new job within the company, the spokesperson said, and will have access to internal resources to help them in their search. Thus, the number who ultimately end up leaving the company could be far less than 1,000.

Bed Bath & Beyond is also cutting 2,800 jobs as it implements an “organizational realignment” aimed at cutting costs and turning to digital-first offerings.

“Saying goodbye to colleagues and friends is incredibly difficult, but this component of our comprehensive restructuring program is critical to rebuild the foundation of our business, construct a modern, balanced and durable business model, and meet the structural shift in customer shopping and service preferences that we have seen accelerate as a result of COVID-19,” Bed Bath & Beyond’s president and CEO Mark Tritton said in a statement.

As part of that plan, the company said it aims to “better serve customers in a digital-first shopping environment.” The changes will also help fund new “customer-inspired” owned brands in 2021, the company said.

Morning Consult released a special edition of its Most Loved Brands 2020, titled “Gen Z’s Most Loved Brands.” In it, the agency revealed that 27% of Gen Z consumers are purchasing more from local organizations as they were before COVID-19, and 24% are buying from Black-owned businesses. In comparison, 17% of millennials are turning to Black-owned companies and 22% are buying local. 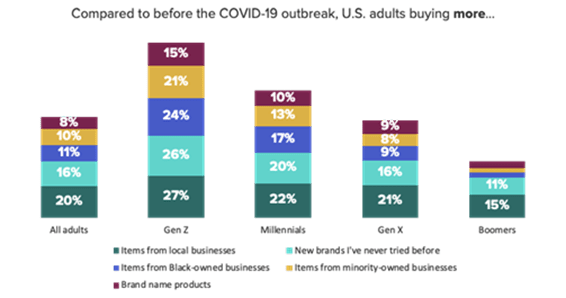 Across age groups, 16% of consumers are buying from brands they’ve never before interacted with, and Gen Z is leading the way—26% are trying out new brands.

In a message sent on Wednesday to staff at TikTok, Mayer said as the political environment has “sharply changed,” he has reflected on what kind of corporate restructuring may be coming for the company, concluding that it was best for him to depart.

“I want to be clear that this decision has nothing to do with the company, what I see for our future, or the belief I have in what we are building,” Mayer wrote in his message, which TikTok shared with NPR.

“I understand that the role that I signed up for — including running TikTok globally — will look very different as a result of the US Administration’s action to push for a sell off of the US business,” Mayer said.

Pappas announced on Aug. 24 that TikTok filed a suit to block the Trump administration’s goal to ban the app in the U.S., unless it was sold to another company. Interested parties include Microsoft and Oracle.

TikTok allows diverse voices a platform for open, creative expression. Today we seek to protect the rights of our community and our company. We have filed suit in federal court to block the Administration's efforts to ban TikTok in the US. Learn more: https://t.co/doH6FjlMC5

Why it’s important: You might try your best to keep your organization, its employees and executives out of political issues, but that’s becoming harder to achieve. It’s especially challenging as the 2020 presidential election draws closer and as brand managers navigate social issues including racial justice, along with the COVID-19 crisis. Prepare now for a potential “Trump crisis”—which might include your organization being criticized or being called out for planning a project that isn’t in the works. Help your leaders know what to do in response and how to handle shifting responsibilities and communications.

Introducing The Nectar Of The DOGS!#BuschDogBrew is bone broth full of dog-friendly flavors and nutrients. Go to the link in our bio to grab a pack for your favorite drinking buddy 🐶! pic.twitter.com/tWA20ys8at

Busch launched the beverage on “National Dog Day” with a contest, promising 100 consumers who purchased the opportunity to win a dog bed:

The brewing company will also donate $1 to Best Friends Animal Society for each case purchased, up to $50,000.

“After a long day there’s nothing quite like having a Busch with a friend, and with so many new pet owners across America this year, we wanted to create a brew to give our fans a chance to share a Busch brew with their ‘best friend’,” says Daniel Blake, VP of Value Brands at Anheuser-Busch. “Additionally, we’re proud to be able to partner with Best Friends Animal Society and continue our efforts to help those furry friends still looking for a home.”

For organizations looking to accommodate changing consumer behaviors as people continue to shelter in place and work from home, consider what you can offer to your consumers’ four-legged friends.

We asked what communications function you think most needs to be overhauled, and 42% of you said PR and communiciations measurement. Nearly 35% said press releases and pitching strategies should be modified, while almost 12% said your organization’s intranet and internal channels could use a refresh, and nearly 12% said the same should be done to their executive communications:

Weigh in below and share your thoughts under #DailyScoop.

Share your morning routine below and under the #DailyScoop hashtag.

One Response to “NBA postpones games after Milwaukee Bucks’ BLM protest, Salesforce and Bed Bath & Beyond to cut thousands of jobs, and TikTok chief resigns”

Consider the possibility, which may sound far out at first, that some of these shootings by police may result from a PR failure.

In this case and others, police say they shot the person because (a)he didn’t stop when ordered by police to stop, (b) the police thought he might be going for a weapon like the knife the latest victim had said he had in the car, (c) many police have been killed by the driver following a traffic stop, and (d) standard operating procedure for police–what they are trained is the right thing to do–is that if the person doesn’t stop and you think he may be headed for a weapon, shoot.

Do you know what happens to many guys in jail? Many people don’t but PR could inform them and give them intense motivation to avoid being jailed.

PR gets people to buy cars that cost several times as much as a $20,000 car. PR gets people to behave in a way that shows how much money or intelligence they have. So could PR be used to sell the idea that it’s smarter to stop when the cop says stop, and to comply with what doctors and lawyers and teachers say?

I think the answer may be yes and that PR can do more for the public than PR is doing now. I think we can SELL intelligent goodness.

There are “pro bono” groups of lawyers, doctors and other professionals, so should PRSA or the association of PR firms form pro bono PR teams?