Sending hot and steamy noods lets people know you care. Tweet us using #SendNoods and #Giveaway for the chance to send noods.

Consumers are sharing their requests under the #SendNoods hashtag for a chance to win a prize, as well, giving the campaign more momentum as it makes headlines and social media conversation.

The company gifted popular TikTok creator Nathan Apodaca a cranberry-red truck filled with bottles of its Cran-Raspberry juice after his video went viral.

The Sept. 25 video, which racked up more than 4.3 miillion views in less than 24 hours on TikTok alone, features Apodaca riding on a longboard to work, drinking a bottle of Ocean Spray and jamming to Fleetwood Mac’s “Dreams”:

Mick Fleetwood joined TikTok to post his own version of the viral video, with the caption, “Dreams and Cranberry just hits different.” It’s garnered more than 1.6 million views so far.

On Oct. 6, Ocean Spray’s chief executive, Tom Hayes, also joined the social media app and posted another version of the video, which has racked up more than 1.6 million views at time of publishing:

Twitter user Thanasi P. shared the effect that the viral video had on both the 1977 Fleetwood Mac hit and on Ocean Spray:

Why it’s important: Amid the many news headlines of the last few months, many consumers are seeking positive and uplifting content and interactions as a respite. Ocean Spray’s response was savvy, making headlines with the gesture of thanks, with many social media users commending Hayes for recording a version. You can also connect with your brand advocates and ambassadors by listening to social media conversations and reaching out with responses and kudos.

Petco announced its stopping the sale of electronic “shock” collars for pets:

We're saying NO to Shock Collars and YES to positive reinforcement dog training. Join our movement by signing our petition at https://t.co/2v7TqzYreH. #StopTheShock pic.twitter.com/j9RdV0Iyab

The move comes as part of a broader corporate transformation of Petco, which is seeking to establish itself as a health and wellness brand. The company on Tuesday announced it would rebrand in 2021 as “Petco, The Health + Wellness Co.”

“Shock collars are not consistent with our mission of improving lives,” Petco CEO Ron Coughlin told CNN Business in an interview.

Along with ending shock collar sales, Petco announced in a press release that its rebranding will include more than 40 new in-store veterinarian hospitals, a pet insurance plan called “Vital Care,” and a redesign of its website and app that focuses on “digital-first health and wellness resources.”

Petco will also offer a digital “Right Food Finder” tool that matches products to pets’ nutritional needs and promised to remove “artificial colors, preservatives and flavors” from its aquatic life and small animal food by 2021. The company implemented this standard for dog and cat foods in 2019.

Willis Towers Watson’s 2020 Cyber Risk Outlook Survey revealed that 86% of respondents think the frequency of cyberattacks will increase because of COVID-19, with 54% thinking the attacks’ severity will rise: 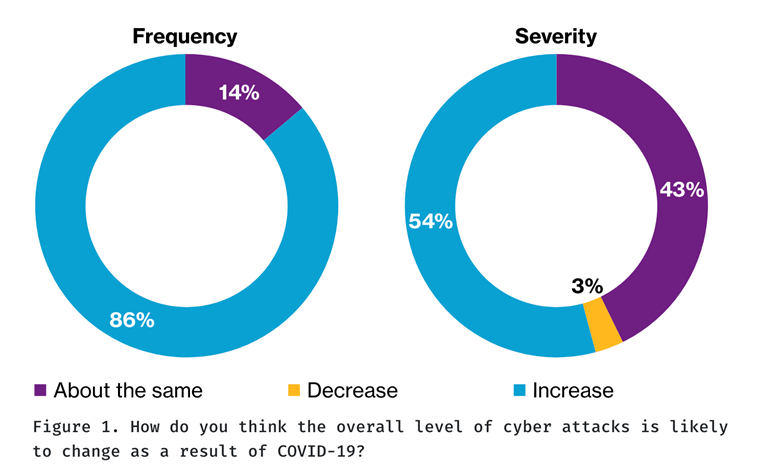 More people are preparing for the effects of a cyber attack, as well. Thirty-three percent of respondents said they felt a cyber crisis costing $10 billion or more will likely happen within the next five years, as compared with the 13% who thought so before COVID-19:

Regardless of where your thoughts and expectations fit with those of the survey respondents, it’s a good time to do an audit of your cybersecurity practices. That includes revisiting your crisis strategy, consulting with your security and IT teams to learn about changes in the landscape and potential threats, and training both employees and leadership on cybersecurity best practices.

The companies have released statements about their diversity and inclusion comments made in June, including their promises to double the number of Black managers and leaders within their respective workforces by 2025, following queries from the U.S. Department of Labor on whether those promises violate federal laws.

The move follows an executive order from the Trump administration banning government contractors like Microsoft from offering certain types of racial sensitivity and other kinds of diversity training.

“It looks like the administration is beginning a concerted strategy to tamp down on organizational (diversity, equity and inclusion) efforts,” said Joelle Emerson, founder and chief executive officer of diversity and inclusion strategy firm Paradigm.

We believe it is a core part of our mission to make our company, our community and our country a place where people of diverse views and backgrounds are welcomed and can thrive. We know that as a company and a country we have more work to do to expand opportunity. We look forward to helping the OFCCP understand the legality of our programs as we work towards a shared goal of promoting diversity in full conformity with federal law.

A Wells Fargo spokesman said the bank “is committed to and taking action to become a more diverse and inclusive company. Numerous efforts are under way to implement changes at all levels of the company, and we are confident that they comply with U.S. employment laws.”

Why it’s important: When you create DE&I goals and initiatives, involve your entire organization. Doing so can help you set meaningful commitments to which you can be held accountable, as well as incorporate valuable feedback from your workforce and help both communicators and your legal team prepare for potential crises, such as a federal investigation or inquiry.

Netflix is facing a criminal lawsuit from Tyler county in Texas for promoting material in the film “Cuties” that “depicts lewd exhibition of the public area of a clothed or partially clothed child,” Reuters reported.

Matt Schaefer, a Texas representative, tweeted a picture of the document:

Netflix, Inc. indicted by grand jury in Tyler Co., Tx for promoting material in Cuties film which depicts lewd exhibition of pubic area of a clothed or partially clothed child who was younger than 18 yrs of age which appeals to the prurient interest in sex #Cuties #txlege pic.twitter.com/UJ1hY8XJ2l

“Cuties is a social commentary against the sexualization of young children. This charge is without merit and we stand by the film,” Netflix said in a statement.

The critically acclaimed film, originally titled “Mignonnes,” won its creator, Maïmouna Doucouré, the Best Director reward at Sundance Film Festival. However, Netflix received backlash for its promo images for the film, which it called “inappropriate artwork.” Criticism has continued as the film has attracted additional headlines—as well as both supporters and critics.

Gift baskets are a staple for the holidays as organizations, agencies and consultants send both employees and clients their gratitude for working partnerships. Though that tradition might change throughout the holidays during COVID-19, there are many options to make your “thank you” stand out.

Check out these gift basket options:

We asked if how often you’re measuring and reporting on your PR and communications efforts during COVID-19, and nearly 47% of you said you’re measuring more. Though almost 27% are measuring less, roughly 17% are keeping the same momentum going for insights and analytics efforts:

Are you measuring and reporting on your PR and communications efforts more or less during COVID-19?

What’s your biggest productivity buster as you work from home?

What's your biggest productivity buster as you work from home?

Share with us what snaps you out of your groove–and how you overcome it–below. We'll dish the results in tomorrow's #DailyScoop!

Share what distracts you and how you overcome it below and under the hashtag #DailyScoop. We’ll share in tomorrow’s roundup.

The shock collars should be sold to PR firms for use on client executives who “speak their minds” when they should know it may be a mindless way to make themselves feel good while making public esteem bad.

There should be GC (or General Counsel) shock collars for lawyers who at the start of a crisis order PR to “say absolutely nothing” until cleared by legal. Savvy journalists my have fun with this by asking “isn’t it a fact” that management broke six of the Ten Commandments in one day? See how the story comes out if you say “I can’t comment on that until we complete our investigation.”

Collar is the slang police word for an arrest but activist demonstrators are forcing dedicated police to put needed policing into arrested development. We may see demands that cops should question suspected criminals remotely or at least while standing six feet away.