TikTok is launching TikTok Kitchen, a service that will create TikTok-branded delivery-only restaurants across the U.S. offering dishes created from the most viral food posts on its platform. TikTok Kitchen will launch with 300 restaurants in March, with plans to expand to over 1,000 restaurants by the end of 2022.

TikTok said that this effort was primarily a campaign to bring TikTok food to fans and not a full-on venture into the restaurant business, emphasizing that creators will receive credit for dishes within each menu and be featured prominently.

“Proceeds from TikTok Kitchen sales will go to both support the creators who inspired the menu item and to encourage and assist other creators to express themselves on the platform in keeping with TikTok’s mission to inspire creativity and bring joy to its users,” the company told Bloomberg. 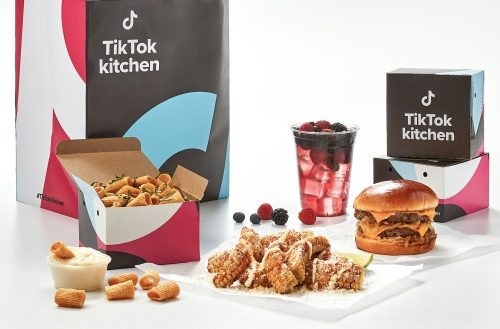 The new partnership is just the latest example of how online trends are shaping real world consumer habits. As the restaurant industry continues to struggle to bounce back from COVID-19, and questions linger about the future of in-person dining, the TikTok restaurant news could be a signal that the future of food will be driven by online conversations and connections.

The announcement is also a reminder for companies to explain how the economic windfall of their success will be shared across stakeholders. Consumers are more interested than ever in how workers are compensated for their labor—and a company that is seen to pocket profits rather than reward innovators and partners will lose business opportunities.

“Spider-Man: No Way Home” took in $260 million domestically in its opening weekend, becoming the second highest movie opening ever at the domestic box office. Sony Pictures, which released the film in partnership with Disney’s Marvel Studios, framed the record weekend as a sign that movie theaters were on the rebound.

Tom Rothman, Chairman and CEO of Sony Pictures’ Motion Picture Group beamed this morning, “This weekend’s historic Spider-Man: No Way Home results, from all over the world and in the face of many challenges, reaffirm the unmatched cultural impact that exclusive theatrical films can have when they are made and marketed with vision and resolve. All of us at Sony Pictures, are deeply grateful to the fabulous talent, both in front of and behind the camera, that produced such a landmark film. Thanks to their brilliant work, this Christmas everyone can enjoy the big screen gift of 2021’s mightiest Super Hero —your friendly neighborhood Spider-Man.”

Others in the industry shared Rothman’s optimism.

“We can legitimately say that we’re in recovery mode,” Mark Zoradi, chief executive of Cinemark, one of North America’s largest multiplex chains, said by phone. He added, “This is a major shot in the arm. I think it’s going to propel a satisfying Christmas season.” Cinemark, which, like other chains, has implemented wide-ranging safety protocols, said on Friday that “No Way Home” delivered the company’s biggest opening-night gross ever.

IMAX’s chief executive, Richard L. Gelfond, called “No Way Home” ticket sales “an emphatic reminder of the unique power of the theatrical experience.” IMAX had its best weekend since 2019.

After efforts to rebound from two years of dark screens and poor returns at the box office that included a star-studded campaign to lure fans back to cinemas and AMC selling its popcorn outside of movie theaters, these positive comments demonstrate how a company can use its big wins to offer hope for its wider industry.

Rothman’s words about intentional marketing with “vision and resolve” speak to how a message of optimism—even in the face of omicron fears—can resonate with a broad audience. 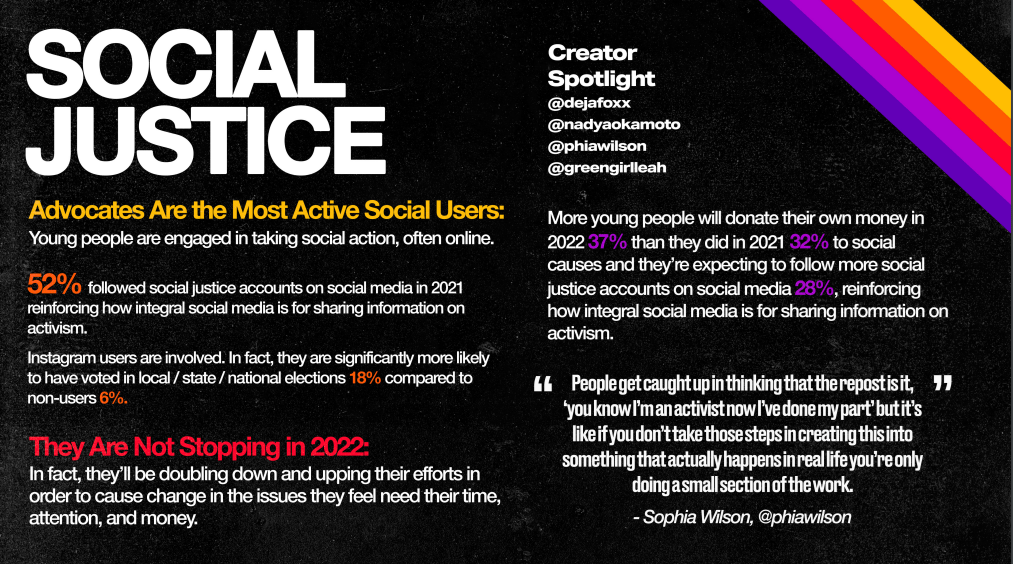 These numbers suggest that Gen Z is increasingly engaging with purpose and values messaging on Instagram. They make a convincing case for your organization and its partners to invest more in cause marketing on the platform.

Facebook reports it notified nearly 50,000 users across over 100 countries that they may have been targeted by surveillance companies working for government agencies or private clients.

The platform’s parent company, Meta, discovered these incidents after a months-long investigation into companies that practice what it calls “surveillance-for-hire” and claimed it would remove about 1,500 fake accounts and send those companies cease-and-desist letters.

“The scrutiny and the pressure on NSO Group is welcome,” said David Agranovich, director of threat disruption for Meta and a co-author of the threat report. “But it can’t just be one and done. Part of the reason why we’re including all of these cases in our threat report, and while we are leaning so heavily into making people understand that this is an industry that is bigger than just one company … is in hopes that it inspires more pressure, more action and broader impact across the entirety of the surveillance-for-hire industry.”

Meta’s immediate notifications to those affected demonstrates a proactive approach to protecting users on its platform that builds on its previous decision to eliminate controversial ad targeting topics and sustains its long march toward repairing user trust. By focusing on revealing a dense and often misunderstood aspect of user privacy, Gleicher and Agranovich establish themselves as industry leaders on an important subject, while also address the immediate concerns of Facebook users.

Several Broadway productions, including “Dear Evan Hansen,” “Aladdin,” “Aint Too Proud,” “Hamilton” and more have canceled Christmas-week performances due to rising COVID-19 infections caused by the omicron variant. The shows shared their regrets on social media:

Performances of DEAR EVAN HANSEN from 12/20-12/26 have unfortunately been canceled out of an abundance of caution surrounding Covid-19, as the health, safety, and wellbeing of our cast, crew, and audience(s) remain our top priority. Performances are scheduled to resume 12/27. pic.twitter.com/5skoUdcqeJ

“What you’re seeing right now is the system actually working brilliantly because every show is testing non-stop,” Playbill Vice President and COO Alex Birsh said. “Because of that, we’re obviously seeing cancellations, but we’re not seeing a whole cancellation of Broadway.”

Each show’s commitment to communicate its COVID-19 announcements and protocols in design templates specific to the production demonstrates how consistent aesthetic design and branding choices can soften the blow of bad news. Birsh’s words, meanwhile, illustrate how industry experts and executives can be deployed to reframe a negative announcement in a positive light by focusing on the wider implications of the decisions and offering perspective into the process leading up to the decision.

One Response to “Spider-Man draws audiences back to the movies, Gen Z leans into social justice on Instagram, and Broadway shuts down amid omicron surge”

Social justice is certainly deserved by people of limited means but if you are middle class you also deserve justice. So do America’s large companies often attacked by politicians with the appeal: “they have plenty of money so let’s take more of their money and use it to give more government benefits.”

There’s no free money so justice means justice for everyone. If politicians screw the poor, they have ways of getting even and some do. Screwing Amazon, Google, Facebook and other large companies would also be bad for our country because for every billion successful companies are deprived of, they must somehow make up for it by paying less to employees and stockholders, and charging more in prices ultimately paid by the public.

But aren’t stockholders rich people who have more money than they know what to do with? No, trillions in stocks are held by retirement funds of workers who spent a lifetime for that money, insurance companies that have to charge us more if their investments pay less, millions of families who need money to some day retire, and other people who don’t look like the rich bankers in the Monopoly game. Even the ultrarich don’t burn the money but spend it on products that middle class workers make, and on factories and buildings that create millions of jobs.

Joining the PR 0aily Leadership Network is wise and almost necessary for those who hope to land a PR job with a top company because recruiters are prohibited by law from asking what you believe in. But if you’re a member of the Leadership Network it’s a sign that “this one is one of us, this one will be on our side.”

What additional you can do is to donate even $25 a year to Business Roundtable or U.S. Chamber of Commerce—people who have no need at all for your money—because if you can mention the donation in a job interview, doubt ye that it can get you a measure of preference? Not a lot but just as a mile race is often won by inches, so is each job interview success.

Justice—people have died for it, people have lied for it, all of us deserve it, and the only way we are likely to get it is if we take care to create social justice for everyone, the needy and he rich who also need safety and fairness. Skin color shouldn’t be a barrier to justice and neither should earning a lot of money as some of us in PR do or will!