Frito-Lay has announced a partnership with aspiring astronaut and STEM influencer Alyssa Carson to promote a contest in which the brand will sponsor 50 girls to go to Space Camp for one week as part of its “Back to School Blast Off” campaign. Families can enter the contest with the purchase of specially marked Frito-Lay variety packs. 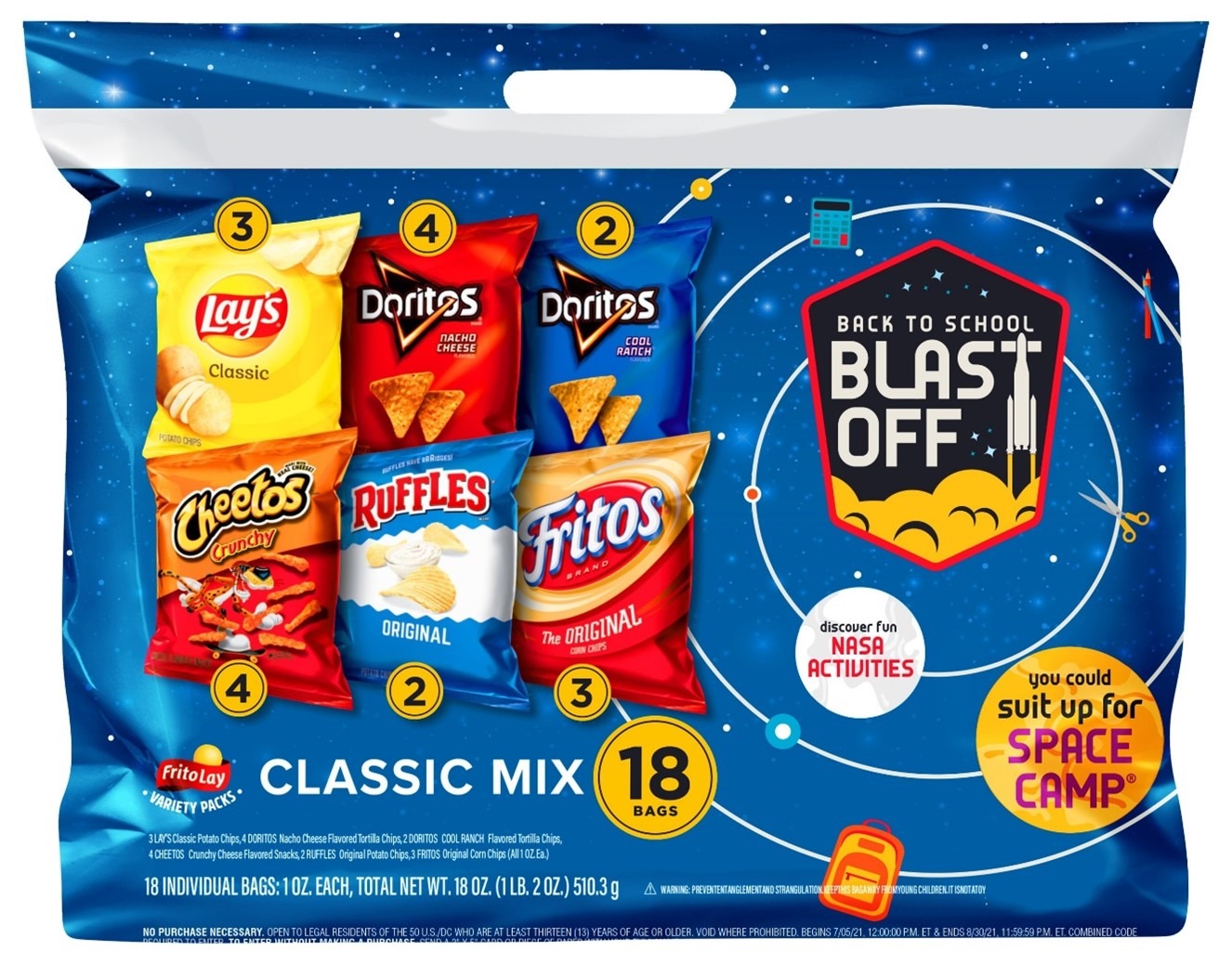 “I developed a love for space at a young age,” Carson said in the press release. “I was fortunate enough to live out my dream to attend Space Camp, which helped me further cement my interest in the STEM field. I want to help kids get that hands-on experience at school and in their homes, which is why I’m excited to partner with Frito-Lay Variety Packs on their mission to help young students, especially female and under-represented community groups, develop their passion for space or any STEM opportunity they want to pursue.”

Frito-Lay’s new promotion aims to build goodwill the week after the company made headlines for settling with an employee union in Kansas following a three-week strike. By sharing this back-to-school promotion, the brand hopes to change the conversation, emphasizing its focus on the importance of education after a year and a half when education has been tricky for so many kids.

Rap artist DaBaby has been removed from the lineup of several popular music festivals following homophobic and sexist comments he made onstage during a Miami music festival last month.

While performing last month at Rolling Loud, DaBaby directed homophobic and sexist comments toward crowd members in the LGBTQ community, as well as those with HIV/AIDS. He encouraged everyone to raise their cellphone lights on the condition that they weren’t gay men or affected by HIV/AIDS, inaccurately stating that the disease would “make you die in two to three weeks.”

Lollapalooza was founded on diversity, inclusivity, respect, and love. With that in mind, DaBaby will no longer be performing at Grant Park tonight. Young Thug will now perform at 9:00pm on the Bud Light Seltzer Stage, and G Herbo will perform at 4:00pm on the T-Mobile Stage. pic.twitter.com/Mx4UiAi4FW

DaBaby’s removal from the above festival lineups followed swift and widespread comdemnation from other artists, including Elton John and Questlove:

(1/5) We've been shocked to read about the HIV misinformation and homophobic statements made at a recent DaBaby show. This fuels stigma and discrimination and is the opposite of what our world needs to fight the AIDS epidemic.

DaBaby’s attempted to apologize, but his mea culpa was insufficient as more and more festivals removed him from their programming.

Anybody who done ever been effected by AIDS/HIV y’all got the right to be upset, what I said was insensitive even though I have no intentions on offending anybody. So my apologies 🙏🏾

DaBaby’s flawed apologies underscore how ignorance will not be excused by audiences when it is communicated with defensiveness. When issuing a mea culpa, be careful not to wrap your apology in any justification or explanation. While audiences understand that people and brands make mistakes, your vulnerability can become a strength when it is communicated from a sincere position of remorse that isn’t laced with excuses.

A recent study by Morning Consult finds that the brand’s Index of Consumer Sentiment (ICS), a daily survey measuring consumer confidence in the U.S. economy, has fallen sharply since the beginning of July as COVID-19 cases and concerns about the Delta variant have been on the rise.

“Following a relative lull in new cases in June, the 7-day average in new cases in the U.S. began rising rapidly at the beginning of this month, increasing three-fold from 13,877 on July 1 to 42,226 on July 25,” said Morning Consult. “This spike in new cases coincides with the downward shift in sentiment as U.S. consumers worry about the impact the new, highly-contagious Delta variant will have on the U.S. economic recovery.” 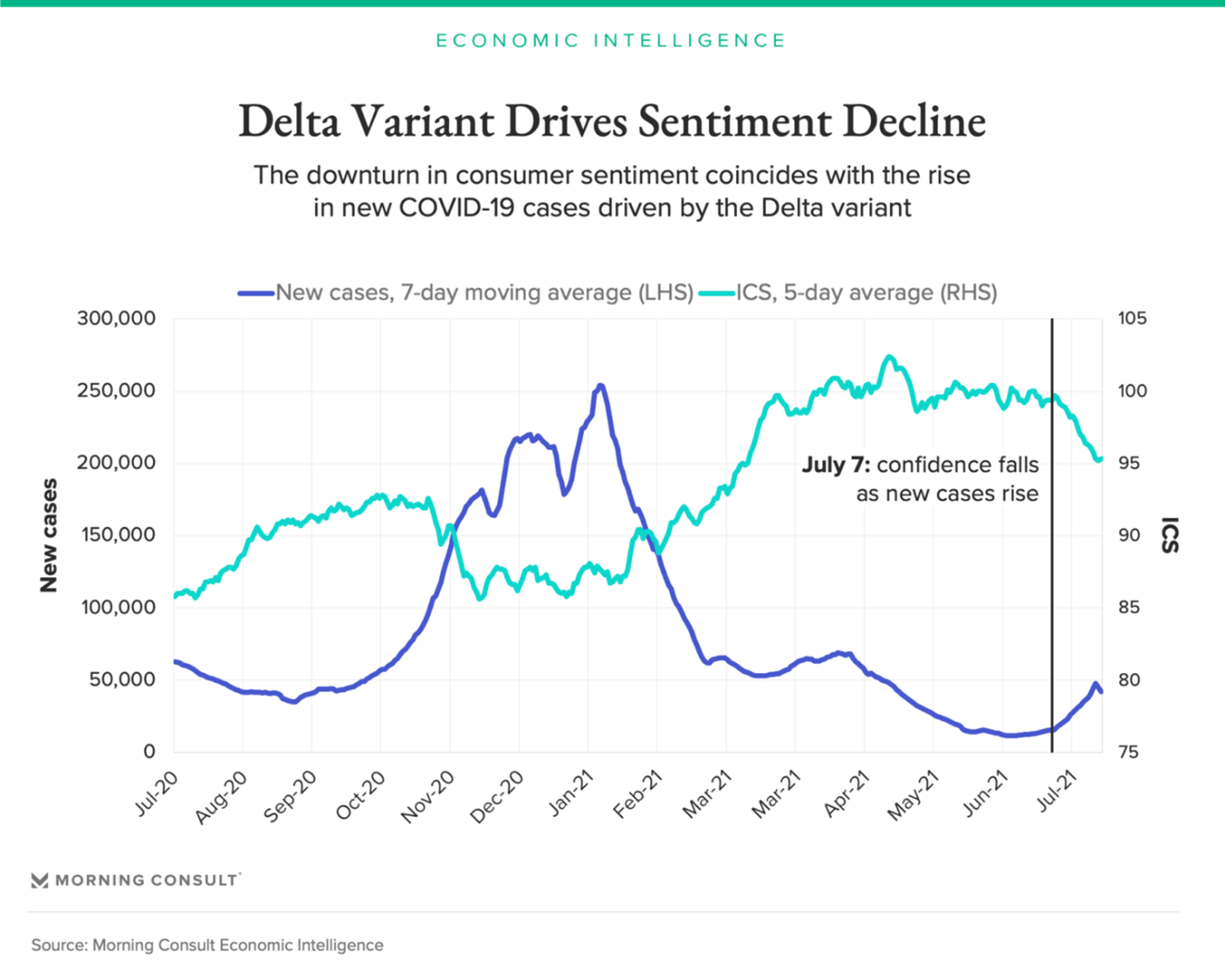 These latest numbers serve as a reminder that your communications around new initiatives, releases and more should only be shared at a time when the economic and social climate is conducive for engagement. Don’t compete with larger conversations and cultural moments that dominate the news cycle, lest your company news be lost in the sea of more pressing national or global concerns.

Video conferencing company Zoom has agreed to pay an $85 million settlement in a lawsuit that claimed the ubiquitous software violated user privacy by sharing personal data with third-party internet services, allowing hackers to interrupt online meetings through a tactic known as “zoombombing” that takes advantage of Zoom’s screensharing feature, and more. As part of the settlement, Zoom agreed to reform its privacy practices, including notifying users when others are using third-party apps in a meeting and providing privacy training to its employees.

In agreeing to settle the case, the company denied any wrongdoing.

Zoom’s response offers a blanket promise to increase security, but doesn’t go into specifics or explain how its privacy reforms will be enacted, enforced or scaled within the organization. This settlement highlights the extent to which remote communications have exacerbated concerns about privacy issues and prompted the general public to wonder how their data is being used and collected.

The Institute for Public Relations, Ragan Communications, and the University of Florida are conducting a follow-up survey to their 2020 report, “The Career Path of a Social Media Professional.”

This year’s survey investigates and illuminates the career path potential of social media professionals, shedding light on how social media is being managed, viewed and evaluated within organizations. Here are some highlights from our 2020 report.

We invite you to take this survey whether you’re in charge of social media for your company or are involved in some aspect of social media for a client. The survey should take approximately 15-20 minutes to complete, and all responses will remain confidential.

As thanks for taking the survey, you’ll get an opportunity to enter a drawing for three $50 gift cards and will receive a copy of the full report, which promises to be chock-full of valuable data for benchmarking and budgeting purposes. The report will be presented on Sept. 9, 2021 at Ragan’s Social Media Conference in Orlando, Florida and published through IPR and PR Daily.

Spirit Airlines canceled hundreds of flights at the last minute on Sunday and Monday, leaving hundreds of passengers waiting in line for hours to request a refund, and forcing many to camp out at the airport.

Spirit Airlines spokesman Erik Hofmeyer blamed the flight cancellations on weather and unspecified operational challenges, a common refrain from airlines including Southwest and American this summer.

“We’re working around the clock to get back on track in the wake of some travel disruptions over the weekend due to a series of weather and operational challenges,” Hofmeyer said via email. “We needed to make proactive cancellations to some flights across the network, but the majority of flights are still scheduled as planned.”

By the time Spirit Airlines issued a social media advisory, the damage had already been done:

It was a joy to wake up at 3:15am to read the cancelation email. I am now 10 1/2 hours in text cue for customer service. Thankfully I'm also about to board another airline for my destination. Never again, you bozos.

We're glad to have you on board, Jeff, and hope that everything smooths out for you today! ^KF

RIGHT NOW: Hundreds of passengers are experiencing flight cancellations on #SpiritAirlines at Myrtle Beach International Airport. Some people say they’ve been stranded since yesterday afternoon— resorting to sleeping on the floor and in window sills. @wpdeabc15 pic.twitter.com/sHh8XdtB70

Some Twitter users pointed out that the way Spirit framed the cancelations intentionally exempted the airline from liability for compensating customers with hotels:

Same thing in Boston… people sleeping on the floor overnight with kids… Spirit is claiming it’s “air traffic” and “weather” so not helping anyone with hotels.

Others started a rumor that what the company framed as “operational issues” was a pilots’ strike:

There are no flights going out. Not just in Orlando but throughout the country. Pilots are on strike till Monday. #spiritstrike #spiritairlines #spirit #flightsCanceled pic.twitter.com/Dzt2cjzQHD

@SpiritAirlines Stop lying to the consumers and the public about what's going on. No pilots. No staff. Empty promises. Fraudulent acts. Thousands stranded and rebooking. #spiritstrike pic.twitter.com/Vfbrl6Ojlt

This company eventually responded to this rumor in a statement to local news.

“There is no strike,” Spirit representative Field Sutton said in an email. “I’m aware of the rumor of a pilot strike, but it’s 100% false. We have a fantastic team of pilots working very hard during this busy travel season.”

This crisis also highlights the extent to which your social media team must be strategically embedded in your larger corporate crisis plan, provided with the resources to conduct social listening at scale empowered to act autonomously to take heated conversations offline and de-escalate them as needed.

Have you ever pushed for the creation of a new communications role at a partner or vendor organization after a crisis, PR pros and communicators? #DailyScoop

Is there a question you’d like to see asked? Let us know using the hashtag #DailyScoop!

.1. Thousands of politicians know they can get space and time by attacking
a large company as not doing enough for the public.

.3. You’re at two disadvantages if your company is attacked: (a) the attacker talks first so by the time you answer, the PR Principle of Primacy is that the public may already be partly convinced by who went first; and (b) almost ALL companies can be accused that they could be charging less, paying more or being safer because this is true. All.

.4. What most people decide will depend not just on arguable facts but on how much the public LIKES the company. If a company is backing some huge research project to protect our air quality, or make bells ring if kids walk into a school with pot or a pistol, or help find ways to make our marriages stronger, or research cardionutrition capsules to make our hearts stronger, the company is more likely to win. But if the company is known mainly for the accusation and for making money, the accusation can result in public disapproval on the theory that where there’s smoke there’s often fire, and billions in company money may be lost.