Presidential candidate Joe Biden announced on Tuesday that Sen. Kamala Harris will be his running mate for the 2020 election. The newly formed team leaned on storytelling to spread the word:

.@KamalaHarris is the daughter of proud immigrants—a mother from India and a father from Jamaica—who raised her to take action.
That’s exactly what this moment calls for: action. And we hope you’ll take action with us: https://t.co/K3mVwfTxXJ pic.twitter.com/MZLAx9IN6C

We are in a battle for the soul of this nation. But together, it's a battle we can win.@JoeBiden—I'm ready to get to work. pic.twitter.com/3PJcUTYBGU

The Kraft Heinz brand announced on Tuesday that its Baby Nut mascot (which came after it killed off Mr. Peanut in a Super Bowl ad) had grown up surprisingly quickly and has turned 21.

I’m officially 21, my friends! Before you ask, yes, I was just a baby. What can I say? It’s been a nutty year. Now someone get this peanut a beer! #MakeMyBirthdayNuts pic.twitter.com/P1UfBIi4N8

Now dubbed “Peanut Jr.,” the mascot is giving away $2,100 to three winners of its #MakeMyBirthdayNuts sweepstakes:

To celebrate my 21st, I’m giving you the best birthday gift ever! In 10 words or less, tell me your dream birthday gift with #MakeMyBirthdayNuts and #Sweepstakes to be entered to win $2,100 or a Planters Prize Pack! Rules: https://t.co/zPV7g61gCq pic.twitter.com/OreGji7hM6

The reaction to Planters new mascot has been mixed at best, but its social media team is taking the snark on Twitter in stride:

^ me to myself in the mirror

Top hat is still my #1. Just tryin something new for a bit.

Oh that's been happening since I was a baby.

Why it’s important: When consumers tell you they don’t like a campaign, logo or mascot, you can either change directions, or embrace the hate. Kraft Heinz and its agency, VaynerMedia, are content with going the second route—and even though it’s brought on criticism, the move has captured social media conversations and made several headlines.

Fox News is introducing streaming programming to international audiences. The service, which will cost $6.99 per month, will debut in Mexico at the end of August, then launch in Germany, the United Kingdom and Spain in September. The media company aims to be in 20 countries by the end of 2020.

It’s not the only media company eyeing international audiences.

Other big media outlets have recently discussed plans to launch in foreign markets. Walt Disney Co., in a call with investors last week, described plans to launch “Star,” a general-entertainment subscription-video outlet in various parts around the globe. ViacomCBS is also at work on a similar project, targeting 2021 for the debut of a service slated to roll out  in Australia, Latin America and the Nordics.

The move emphasizes the growing trend of digital content formats, especially during COVID-19. It also can stand as a lesson for brand managers to consider multicultural marketing best practices that include adopting your messages to cater to cultural expectations, not just overcome language barriers.

Twitter rolled out a feature that allows the social media platform’s users to select who can reply to their tweets.

Here’s how it works. Before you Tweet, choose who can reply with three options: 1) everyone (standard Twitter, and the default setting), 2) only people you follow, or 3) only people you mention. Tweets with the latter two settings will be labeled and the reply icon will be grayed out for people who can’t reply. People who can’t reply will still be able to view, Retweet, Retweet with Comment, share, and like these Tweets.

… Since we started testing this in May, people have used it to host interviews and panels, share what’s on their mind, and make announcements. We’ve learned a lot from usage, feedback interviews, and surveys. These settings help some people feel safer and could lead to more meaningful conversations, while still allowing people to see different points of view. 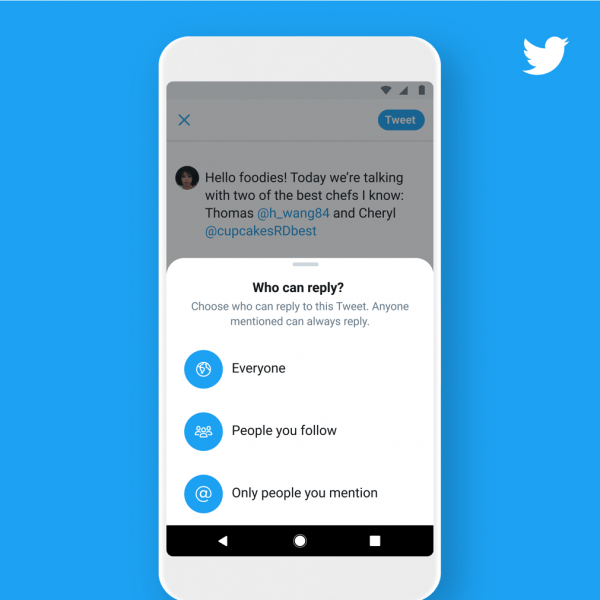 Xie reported that in the testing phase, 60% of the feature’s users didn’t resort to using “Mute” or “Block,” and the settings prevented an average of three “Potentially abusive replies, while only adding one potentially abusive Retweet with comment.”

Tweets limiting replies also caused people to visit Twitter’s “Retweets with Comments” timeline four times as much as with tweets to which they could reply.

Kroger to expand its e-commerce footprint

The grocery chain is partering with Mirakl to offer consumers items from “reputable third-party sellers” as well as its own products through Kroger Ship, which are delivered directly to people’s homes. Kroger said more than 50,000 new products will be available when the marketplace launches this fall.

Grocery-store operator Kroger is setting up an e-commerce marketplace open to third-party vendors as part of a bid to compete with Amazon and Walmart via @technology https://t.co/i2tmEIdAv2

In a press release, Kroger wrote:

“The expansion of our Kroger Ship platform will continue to bring together our industry-leading customer insights and merchandising data to offer our customers a digital shopping experience that includes staples available in our physical stores as well as products that are exclusive to Kroger.com,” said Stuart Aitken, Kroger’s senior vice president and chief merchant and marketing officer. “As part of our continuing transformation, we look forward to accelerating the development of our e-commerce platform and providing our customers with even more choices.”

Kroger’s offering will compete with Amazon and Whole Foods as well as Walmart, which just partnered with Instacart to offer same-day delivery in San Francisco, San Diego, Los Angeles and Tulsa, Oklahoma.

Why it’s important: Expect the e-commerce space to heat up as more organizations focus their efforts on offering consumers the option to order online, and consumers’ shifting preference to buy online or use curbside pickup will remain even after COVID-19. If you haven’t already evaluated how you can offer more digital-first products, services and content, you should do so before it’s too late.

COVID-19 has led to shortages of toilet paper, hand sanitizer and more—and now, cans and bottles of Dr Pepper are harder to find. The brand tweeted this from its Twitter account:

We know it’s harder to find Dr Pepper these days. We’re working on it – hang tight!

Note: This applies to all flavors of Dr Pepper – including our newest permanent addition to the family, Dr Pepper & Cream Soda. pic.twitter.com/Kf0UedMuiw

Welcome to the club. We feel your pain.😉

Dr Pepper’s tweet was a great way to keep consumers in the loop, which further strengthens brand loyalty (even if the drink can’t be found on shelves).

We asked if your organization is preparing to “return to work” this year, and roughly 30% of you said “yes,” while nearly 35% of you said “no.” Almost 35% are still undecided:

Is your organization preparing for a "return to work" in 2020?

Share how your workforce is adjusting in the "new normal" below and under #DailyScoop.

Share with us your thoughts below and under the #DailyScoop hashtag.