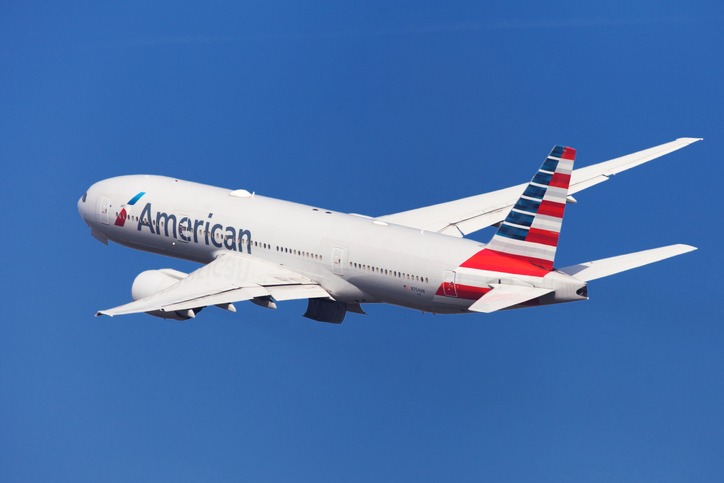 Today is National Taco Day, and several fast food chains are marking to occasion by encouraging (or requiring) digital engagement from fans who wish to claim free tacos.

Taco chain El Pollo Loco is bringing back its crunchy taco as a digital-only menu item, pushing the return of a customer favorite by encouraging fans to become Loco Rewards members by offering them a free Mexican Coke with every crunch taco purchase.

“Our customers have been very vocal on social media about how much they love and miss our Crunchy Taco, and we’ve been listening,” El Pollo Loco President and CEO Bernard Acoca said in a press release. “We’re thrilled to be bringing back this much-loved classic just in time for National Taco Day, and we’re also excited to continue our digital evolution with its rollout as the very first El Pollo Loco menu item that can only be purchased online or through the app.”

Taco Bell hopes to keep the conversation going by not only offering a free crunchy taco to all Taco Bell Rewards members who use its app, but also launching a server on the popular chat app Discord for taco fans who want to engage in taco-related conversation all day:

Want to talk tacos ALL. DAY. LONG. with other taco lovers on National Taco Day? Us, too. Join us on our new Taco Bell @Discord.

“Taco Bell will launch its own server on chat platform Discord, where it will crown a ‘taco champion’ via a trivia campaign,” reports Marketing Dive.  “The brand will also ‘raid’ other Discord channels, giving away free tacos. Easter eggs on Reddit and across Taco Bell’s other social channels will promote the chain’s effort.”

As both brands accelerate their digital evolution during National Taco Day, these stunts highlight the extent to which social listening and creating a space for online conversations are crucial for brick and mortar businesses to survive amid an increasingly mobile world.

New members can immediately vote on board elections and Golden Globes, and will retain voting rights for 10 years.

“We are thrilled to welcome these new members into our family,” said HFPA president Helen Hoehne. “We are building a new organization, one that is not focused on fulfilling quotas, but instead has diversity and inclusion at its core.”

“As a committee, we’re proud of this first-class we’ve invited to join the reimagined HFPA. They’re a group of well-respected journalists from around the world who will bring a variety of unique perspectives to this organization,” said Credential Committee member Tre’vell Anderson.

The HFPA also announced a new interim CEO, Todd Boehly, to lead the organization. Boehly is CEO of Eldridge Industries, which owns MRC and Dick Clark Productions, the latter of which produces the Golden Globe Awards show.

“Todd Boehly is already a partner of the HFPA who has consistently supported reforms and encouraged change from the beginning. As a results-driven businessman with a proven track record of success, his guidance as interim CEO will be instrumental in achieving meaningful change and greater diversity and inclusion,” HFPA president said Helen Hoehne in a statement announcing the move.

This announcement hopes to signal a turning point for the HFPA following reports from earlier this year about the organization’s failure to have a Black member in over 20 years. Things got worse when NBC, which hosts the annual Golden Globes, announced it would not air the awards ceremony in 2022, and will not commit to airing the show in 2023 until the HFPA demonstrates an active commitment to DE&I progress.

In announcing its new CEO, the HFPA makes a connection between Boehly’s experience as a philanthropist and his track record as proof of his commitment to DE&I work. However, it  doesn’t make explicit what those connections are. When announcing leadership changes, consider working with the new executive so they can spotlight their past qualifications, and future commitments, in their own words. 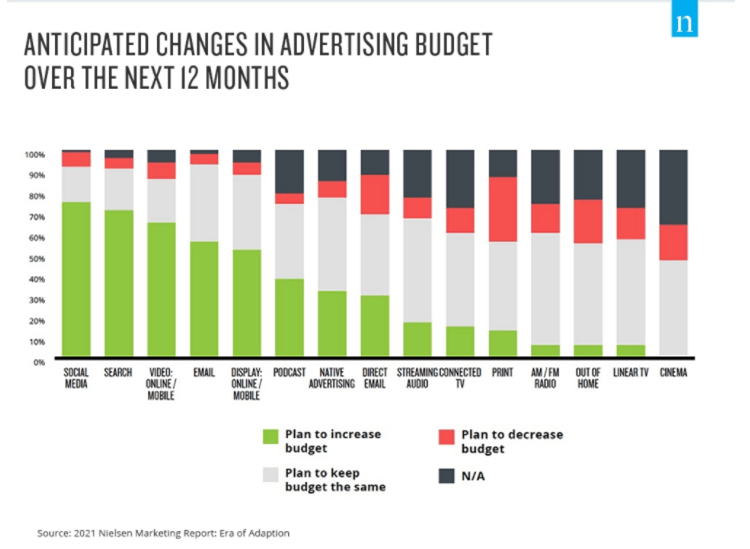 These numbers suggest that, despite all the current distrust of social media platforms, most marketers don’t doubt the advertising potential as budgets increase in 2022. Despite the buzz around audio as an increasingly popular communications medium, it’s also clear that marketers are not as convinced of audio’s potential to convert prospects to customers. Per the data, the projected advertising spend for podcasts and streaming platforms is still only about half of that allotted for social media.

Accounting firm PricewaterhouseCoopers (PwC) announced that it will allow its 40,000 U.S.-based employees to work virtually from anywhere in the country, except for workplace services teams and IT workers who will have to be in office due to the function of their roles.

“We are unveiling these enhancements to our people experience to respond to what their needs are in this changing work environment, to continue to put flexibility and well-being benefits at the center, and expand the pool of people we attract and recruit to achieve our aggressive hiring goals and our [diversity, equity and inclusion] aspirations,” PwC said in a statement.

PwC’s framing of its remote work policy around DE&I is the second instance of a major company tethering work flexibility to worker recruitment. In its record $2.1 billion purchase of a Manhattan office building, Google suggested that its investment in physical office space also supports DE&I by acting as a community hub. Both instances highlight how your organization’s remote, hybrid or in-office policies have implications that might begin with the employee experience but ultimately radiate outward to spotlight your larger brand commitments to building a healthy, diverse community.

Katami National Park in Alaska has launched its annual Fat Bear Week, a March Madness-style voting bracket competition that asks fans to choose the fattest brown bear in an effort to raise awareness around the welfare of brown bears in the park. The competition runs through Oct. 5.

Fans commented on the changes that their favorite bears have made over the past few months:

okay Otis should win simply for this transformation WOW pic.twitter.com/P9O5COgERZ

Victors of tournaments past, 747 & 480 Otis cross swords in an historic bout. Only those w/ the sapience of sages can decide. Will the Earl of Avoirdupois 747 survive against 3-time #FatBearWeek champ 480? Or will 480 beat this Brobdingnagian bear?

Once charming chums, now battling bros from different litters duel for dominance in #FatBearWeek. 503’s frame forges him into a force to be feared. Kid brother 812, not far behind in the growth of his girth, gives 503 cause to pause. Vote @ https://t.co/thJwxp9wuP til 5 AKT/9 ET. pic.twitter.com/TKMOrvWBzA

As the competition rages on, Katami is keeping fans updated by greying out eliminated bears on the bracket:

Bulbous, broad-bottomed bear, 151 Walker bowled over his competition to flatten the floof & forge ahead to the finals. Can 151 maintain his mojo & close out the competition to claim the crown?

Katami’s ability to engage members of the public who aren’t necessarily nature buffs or brown bear stans demonstrates the power of gamifying your social media campaigns.

American Airlines, Alaska Airlines and JetBlue have told employees that they must receive COVID-19 vaccinations to comply with new federal rules, which both require vaccinations or aggressive periodic testing for employees of private companies. Federal authorities also vowed to enforce stricter vaccination rules for federal contractors, which includes major airlines as they transport government employees and provide emergency aid (as was the case with the Afghanistan evacuations).

Last week, the Biden administration said federal contractors would need to be vaccinated no later than Dec. 8. All three airlines said there will be an approval process for medical and religious exemptions. “As a result, the federal vaccine mandate requires that all of American’s U.S.-based team members and certain international crew members be vaccinated, without the provision of a regular testing alternative,” American Airlines CEO Doug Parker and its president, Robert Isom, wrote in a note to staff late Friday. “While we are still working through the details of the federal requirements, it is clear that team members who choose to remain unvaccinated will not be able to work at American Airlines.”

“Since our company does significant work for the federal government, we have determined that Alaska Airlines, Horizon Air and McGee employees – all part of Alaska Air Group – do fall under this federal vaccine mandate, along with other major U.S. airlines,” Alaska said Thursday in a staff note.

These mandates arrive the week after United Airlines reported that most of its workforce complied with the airline’s employee vaccine mandates. As other commercial airlines shared their new policies with employees, United’s communications team shared its strategy for rolling out mandates with The New York Times, which included putting breadcrumbs out to the media and engaging employee unions.

United’s communications team, led by Josh Earnest, previously a press secretary for President Barack Obama, informed the media of its plans in the hope that approval from health experts on television might help. “That echo chamber, I think, was important in influencing the way that our employees responded to this,” he said.

In January, at a virtual meeting, Mr. Kirby told employees that he favored a coronavirus vaccine mandate. Writing letters to families of the employees who had died from the virus was “the worst thing that I believe I will ever do in my career,” he said at the time, according to a transcript. But while requiring vaccination was “the right thing to do,” United would not be able to act alone, he said.

“The more people you get to take action on their own, the more you can focus on reaching the remaining people before any knock-down, drag-out scenario,” said Sara Nelson, the president of the Association of Flight Attendants, which represents more than 23,000 active workers at United.

Though American, JetBlue and Alaska did not acknowledge it, United Airline’s success with its own vaccine mandates just the week before set a precedent that put added pressure on other commercial airlines to comply quickly with Biden’s deadline. American, Alaska and JetBlue take a page out of United’s book by communicating announcements to employees from the outset, showing the remaining importance of internal comms.

United Airlines’ work to join forces with industry partners (such as the Association of Flight Attendants) ahead of the federal mandates even being announced emphasizes how the best crisis response doesn’t have to wait for regulatory pressure.

Earnest’s words about tipping off media outlets to plans ahead of a formal announcement, meanwhile, speak to the power of building relationships reporters and treating coverage around a pending announcement as a listening tool to gauge sentiment before the plans are set in stone.