Ellen DeGeneres has announced that her talk show will end after its upcoming 19th season and she will seek new challenges and opportunities as a creative person. Embedded in the announcement was the news from earlier this year that her show lost over a million viewers since returning to the air this past September, a 43% decline that marked a steeper drop in viewership than any of the show’s competitors, which many attribute to allegations of a toxic workplace culture on set.

“Ellen DeGeneres has built her worldwide, multimillion-dollar brand on the motto ‘be kind,’ with lavish giveaways and acts of charity,” began the Buzzfeed exposé detailing the toxic workplace conditions. “But behind the scenes, current and former employees on her leading daytime show say they faced racism, fear, and intimidation.”

While the past year has taught leadership that employee well-being and workplace wellness can become a crisis when not swiftly addressed, the final chapter of The Ellen DeGeneres Show has become a marquee example of the extent to which a reputation as a toxic workplace can affect your bottom line.

The CDC has announced that fully vaccinated people can safely go indoors without wearing a mask, but the news came with a few caveats. The relaxed restrictions don’t extend to hospitals, planes, trains and other forms of public transportation or transportation hubs. The federal government also stresses that citizens are still subject to state and local government guidelines, and many governors have since announced that they will take the guidance under advisement before adopting it.

While President Biden called for sensitivity and kindness between those who have been vaccinated and those who have not, some unions and trade groups expressed concerns that the CDC’s messaging didn’t go far enough in offering guidance for how their industries should enforce the new guidelines.

The United Food and Commercial Workers union, representing thousands of grocery store workers, criticized the C.D.C. for failing to consider how the new policy would impact workers who have to deal with customers who are not vaccinated. “Millions of Americans are doing the right thing and getting vaccinated, but essential workers are still forced to play mask police for shoppers who are unvaccinated and refuse to follow local Covid safety measures,” the union’s president, Marc Perrone, said in a statement. “Are they now supposed to become the vaccination police?”

The Retail Leaders Industry Association, a trade group, said that the policy complicated matters in states that still have mask mandates in place that retailers must follow. “These conflicting positions put retailers and their employees in incredibly difficult situations,” the group said in a statement.

As businesses continue to struggle with the enforcement of changing mask guidelines, communicators leaders in affected industries should reach out to state and local officials immediately for clarification on guidelines, policies and procedures. Give state and local officials a deadline for responding to your concerns and tell them when you plan to release a public statement.

Should a public statement be required to encourage accountability from officials, position any newly constructed policies with the health and safety of your stakeholders front and center while setting the expectation that your policies may change and expressing a willingness to cooperate with officials pending future changes.

A report by Morning Consult found that 57% of unvaccinated adults surveyed said a big cash payment, such as a $1,000 savings bond, would sway them to get a vaccine. Meanwhile, 43% said they would probably, or definitely get vaccinated if they were offered a smaller reward, such as a $50 bond. Adults under age 45 were more likely to say a big financial incentive would make them more willing to get a vaccine. 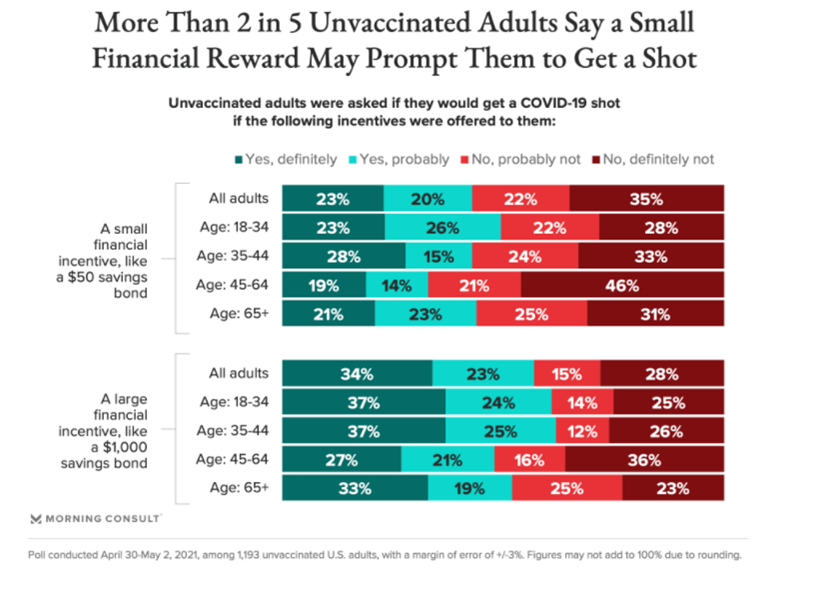 While you may not be in the position to enter your workforce in a million-dollar lottery for the vaccinated, financial incentives can take much simpler forms, like paying employees extra for time spent going to get their vaccine or providing PTO for recovery after each dose.

Researchers at The Center for Countering Digital Hate have found that 12 people are responsible for 65% of the misinformation about COVID-19 vaccines that spread on Facebook, Instagram and Twitter.

“We reacted early and aggressively to the COVID-19 pandemic by working with health experts to update our misinformation policy to target harmful claims about COVID-19 and vaccines, including taking action against some of the accounts in the CCDH report,” spokesperson Kevin McAlister said in a statement. “In total, we’ve removed more than 16 million pieces of content which violate our policies and we continue to work with health experts to regularly update these policies as new facts and trends emerge.”

However, Facebook also disputed the methodology of the center’s report, saying it was not clear what criteria the group used to choose the set of social media posts at which it looked.

Twitter said it permanently suspended two of the “Disinformation Dozen” accounts for repeatedly breaking its rules, required other accounts to delete some tweets and applied labels that link to credible information about vaccines and don’t allow the tweets to be shared or replied to. Overall, it’s removed more than 22,400 tweets for violating its COVID-19 policies.

However, spokesperson Elizabeth Busby said Twitter distinguishes between “harmful vaccine misinformation that contradicts credible public health information, which is prohibited under our policy, and negative vaccine sentiment that is a matter of opinion.”

Remember to always vet the methodology of any data or studies that are used in challenging your company or industry’s reputation before crafting a response. Acknowledge your detractor’s claims in any statement before challenging them, and treat your statement as an opportunity to reinforce the distinctions in your company’s methodologies as they pertain to its brand values.

New York City mayor Bill DeBlasio has announced that the burger chain Shake Shack will offer free fries to any customer who provides proof of vaccination, piggybacking on the trend started by Krispy Kreme despite mixed evidence on the effectiveness of incentives and giveaways:

Twitter users were also quick to question the intention of the promotion:

The fact that many think a lottery ticket and free fries at Shake Shack are bigger incentives for people to get vaccinated than to help protect the lives of the vulnerable says everything you need to know about America.

"Take a vaccine that could save my life, or the lives of my loved one? Nah."

"Take a vaccine that could get me free fries from Shake Shack or a 0.0000001% chance at winning a million dollars? Sign me up!"

Two weeks from tonight on May 26th, we will announce a winner of a separate drawing for adults who have received at least their first dose of the vaccine. This announcement will occur each Wednesday for five weeks, and the winner each Wednesday will receive one million dollars.

While DeWine acknowledged critics who lambasted Ohio’s lottery as frivolous, the image of DeBlasio eating a hamburger during a live press conference was all that many saw regarding the Shake Shack promotion. The public response to each of these promotional campaigns emphasizes the necessity for brand communications that acknowledge the sober reality of pandemic messaging.

Apple has terminated new hire Antonio García Martínez mere hours after more than 2,000 employees circulated a petition calling for an investigation into his hiring. Employees protested the hiring of Martínez, who joined Apple following his role as a Facebook product manager on the ad targeting team, due to comments in his book “Chaos Monkeys,” Hunter S. Thompson-style memoir where he shared views critics say are “misogynistic.”

“We are deeply concerned about the recent hiring of Antonio García Martínez,” employees wrote in the petition. “His misogynistic statements in his autobiography—such as ‘Most women in the Bay Area are soft and weak, cosseted and naive despite their claims of worldliness, and generally full of shit’ (further quoted below this letter)—directly oppose Apple’s commitment to Inclusion & Diversity.”

…In a statement emailed to The Verge, an Apple spokesperson said: “At Apple, we have always strived to create an inclusive, welcoming workplace where everyone is respected and accepted. Behavior that demeans or discriminates against people for who they are has no place here.”

Apple’s response acts a mirror opposite to Basecamp’s recent wave of mass resignations after leadership failed to address employee concerns about company leaders’ open bias. Aside from reinforcing Apple’s status as an industry leader for living its values, the company’s swift response to employees serves as a reminder that there is little time to hesitate when an internal crisis emerges and that you should always assume the crisis, and your response, will eventually be published externally.

Yesterday we asked you to share with us your perseverance, in GIF form, as you tough it out until the weekend.

Some of you made it to Friday by reminding yourself of your power and professionalism:

Others were barely hanging on, but still saw the light at the end of the tunnel:

It’s Thursday and we’re over the hump, PR pros and communicators! Show us your best face of perseverance, in GIF form, for toughing it out until the weekend. #DailyScoop pic.twitter.com/mORZGNCiv4

Have you shared any new messaging with your stakeholders considering the new CDC guidelines on mask requirements indoors, PR pros and communicators?

Have you shared any new messaging with your stakeholders considering the new CDC guidelines on mask requirements indoors, PR pros and communicators? #DailyScoop

How are you planning to change your safety messaging after the big news? Let us know in the comments below. We’ll share the results in Monday’s roundup.